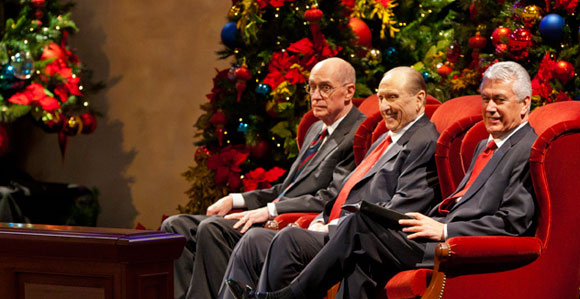 The First Presidency invites Church members and others to view the satellite broadcast of the annual Christmas devotional, which will originate from the Conference Center on Sunday, December 2, 2012, at 6:00 p.m. mountain standard time.

This devotional will include Christmas messages from the First Presidency and music by the Mormon Tabernacle Choir and the Orchestra at Temple Square.

Tickets are no longer available, but standby seating will be available on a first-come, first-served basis. The standby line is formed at the north gate of Temple Square.

Live audio and video of the devotional will also be available in English and Spanish on mormonchannel.org.

The First Presidency Christmas Devotional will also be broadcast or rebroadcast over the Church satellite system in more than 50 languages. Check with local leaders for more details.

Outside the United States and Canada, a DVD or audio recording of the broadcast will be available through the assigned administrative office to units that do not receive satellite or Internet broadcasts. Leaders should arrange to show the recording to these units.