Treasures of the Collection: The Office of Church Historian and Recorder 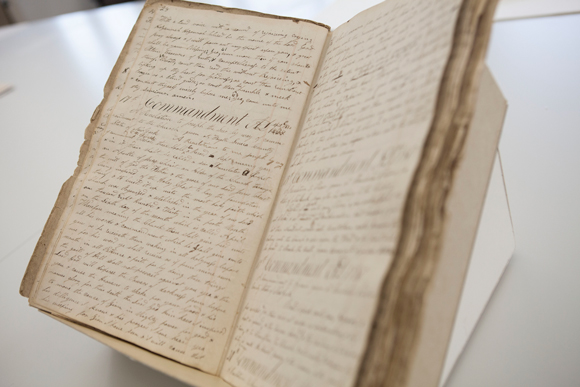 “Without these records, in 100 years there will be no evidence of any one of us if we don’t keep a record of our lives, our stories. [The records] will give us a voice into history as to things that have happened and how it affected us in our lives. Without that, civilization isn’t worth anything.” —April Williamsen, Church History Library public programming specialist

A revelation given to the Prophet Joseph Smith, written by John Whitmer on April 6, 1830, states, “Behold, there shall be a record kept among you.”

That revelation later became the 21st section of the Doctrine and Covenants and the commandment that would begin the precious record collections for The Church of Jesus Christ of Latter-day Saints.

The original document containing that revelation, along with 50 other rare artifacts showing the records and responsibilities of the Church historian and recorder over the past 182 years, will be on display for 15 days during the Treasures of the Collection open house at the Church History Library in Salt Lake City, Utah, USA.

“We are telling a story about the Church historian and recorder,” said April Williamsen, public programming specialist for the Church History Library, “telling about the things they were responsible for, the things they did, and why record keeping is important in the Church and why we take that mandate seriously.”

Each of the nine displays will showcase rare items and original documents that past and present Church historians have been responsible for recording or collecting.

Because of the rarity and age of some of the documents, this type of experience will be rare for the general public, Sister Williamsen said. Many of the documents have not been on display for over two years, some longer.

One of the Prophet Joseph Smith’s journal pages will be on display—rare because the entry is written in Joseph Smith’s own handwriting. This is unusual because Joseph Smith usually had a scribe do most of his writing for him.

“To have something in his handwriting is rare and unique,” Sister Williamsen said. “It’s fun to see those kinds of things.”

Other original documents will include Willard Richards’s Carthage statement, announcing the death of the Prophet Joseph Smith and Joseph’s brother Hyrum, dated June 27, 1844, and signed by both Willard Richards and John Taylor.

“When you look at that and read it, you can almost just hear him,” Sister Williamsen said. “I think, ‘How terrible that would have been for him to write that letter to the Saints in Nauvoo.’ To me, that makes it real.”

One of the few copies of the Book of Commandments will be on display, as well as the only known copy of the French and German Book of Mormon in existence, which was laid out by John Taylor.

“Just from simple things to great things that are fun to look at—we are hoping to cover a broad spectrum of individuals and how the records affect everybody’s life,” Sister Williamsen said.

“Without these records, in 100 years there will be no evidence of any one of us if we don’t keep a record of our lives, our stories,” she continued. “[The records] will give us a voice into history as to things that have happened and how it affected us in our lives. Without that, civilization isn’t worth anything.”

The current Church Historian and Recorder, Elder Steven E. Snow, along with former historian and recorder Elder Marlin K. Jensen, will be at the exhibit on Saturday, September 29, from 7:30 to 8:30 p.m. to talk to visitors.