Tickets Soon Available for Savior of the World 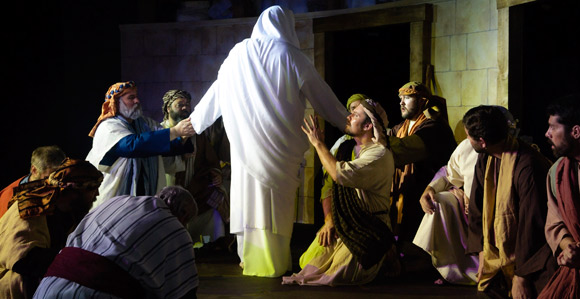 The second half of Savior of the World depicts Christ’s burial and Resurrection and ends with His charge to take the gospel to the world.

“I hope that those who come will feel that Christ is not just an interesting character, or someone far removed from them, but that He is real, that He came to live among us, and that the people who surrounded Him in His mortal life were being invited to do just as we are—to believe and accept Him and follow Him.”—Cynthia Collier, director of Savior of the World

Tickets for Savior of the World: His Birth and Resurrection, a musical production performed in the Conference Center Theater in Salt Lake City, Utah, and based on the events surrounding the birth and Resurrection of Jesus Christ, will be available beginning October 16, 2012.

The two-hour event will run from November 16 through December 29, 2012. Performances are available Tuesday through Saturday evenings beginning at 7:30 p.m., mountain standard time, with a 2:00 p.m. matinee performance each Saturday. The matinee on December 8 is specifically for those with visual or hearing impairments.

Tickets are $8 USD, available on a first-come-first-served basis, and may be obtained through ChurchofJesusChrist.org/events, by calling the Temple Square Events Ticket Office at (801) 570-0080, or by visiting the ticket office at Door 4 of the Conference Center. There is a limit of 10 tickets per order.

Doors open a half hour before each performance. Admission is open to those aged 8 years and older, and seating is general admission. A limited number of standby tickets are available for each performance.

First performed in 2000 for the inauguration of the Church’s Conference Center Theater, Savior of the World was written by a council of members with professional scriptwriting backgrounds who were tasked with the responsibility of bearing testimony of the Savior, sharing the gospel, and building testimonies.

Cast members are chosen not strictly on the basis of theatrical ability, but also on their desire and willingness to share a witness of the Savior. The more than 100 speaking and singing parts are recast every year, bringing new participants and a new feeling to the production.

“We have a complete range of experience in our cast, but everyone really needs to love the gospel and have a desire to share a witness of the gospel,” said Cynthia Collier, who is directing this year’s production. She also directed it in 2009 and was part of the writing group in 2000. “We are always impressed at how many come with a desire to grow in their own faith and to share their testimony of the Savior.”

The first act depicts the events leading up to Christ’s birth, while the second act begins with His burial and ends with His charge to take the gospel to the world and the joyous anticipation of His Millennial return.

“This is first and foremost a tool used by the Church to spread the gospel,” producer Jay Clark emphasized. “We’re not in the entertainment business, though it is entertaining. … The Church uses theater as a means to teach gospel principles.”

Brother Clark has been involved with Savior of the World since 2000, when he helped with the original production design. He commented that both members and those not of the LDS faith will find value in experiencing the production.

“Most of the dialogue is taken exclusively from the King James Version of the Bible, which gives it a powerful spiritual quality,” he said. “The production presents gospel concepts through original music in a very dignified and sacred way.”

Much of the 38 musical numbers is based on familiar hymns, such as “Jesus, Once of Humble Birth,” “I Stand All Amazed,” and “He Is Risen.”

One concept that is dynamically presented in Savior of the World is the reality of a premortal existence and an afterlife. Throughout the two-hour production, performers in white robes, representing angels, watch from a raised platform in the background. At times a transparent curtain appears and individuals in white robes descend from the platform, pass through the curtain, and interact with those on stage.

This will be the 18th time Savior of the World will run in the theater (it used to be shown at Easter, as well), and each run includes more than 30 performances. However, the goal is the same as it has  always been.

“I hope that those who come will feel that Christ is not just an interesting character, or someone far removed from them, but that He is real, that He came to live among us, and that the people who surrounded Him in His mortal life were being invited to do just as we are—to believe and accept Him and follow Him,” Sister Collier said.

“We might ask as we leave, ‘What kind of disciple am I today? How can my discipleship improve?’ We want those who come to feel the faith of those on stage, and leave asking themselves what they should do about what they have felt.”