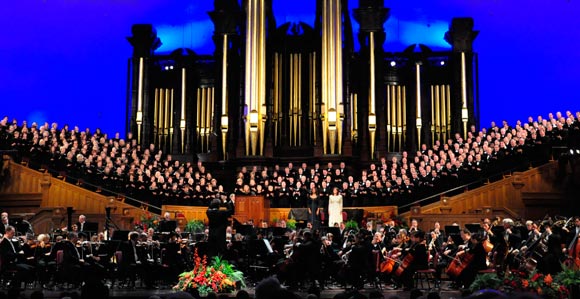 Concertgoers to this year's O.C. Tanner Gift of Music concert, featuring the Mormon Tabernacle Choir and Utah Symphony, will be treated to French composer Hector Berlioz’s Requiem, conducted by Thierry Fischer, Utah Symphony music director, in the Salt Lake Tabernacle on Friday and Saturday, September 16 and 17, 2011, at 7:30 p.m.

Requiem was originally commissioned to honor the dead of the 1830 French Revolution, but it was not performed until December 1837. About 400 musicians took part in that first performance, and more than that number will perform the piece for these performances.

Luke Howard, associate professor at Brigham Young University’s School of Music, writes in the concert program, “In Berlioz’s opinion there was nothing more magnificently operatic than the Day of Judgment, with the entire human race as a cast of characters. This makes Berlioz’s Requiem—conceived in the epic tradition of French Grand Opera—one of the least overtly religious requiems ever composed, and yet it never lacks for inspiration, even spirituality.”

The 10-movement work derives its text from the traditional Latin Requiem Mass, but Berlioz adapted the text to fit the needs of his extravagant and largely orchestrated music.

The words from the ninth section, “Sanctus,” might resonate with Latter-day Saints:

Holy, holy, holy, God of Hosts
Heaven and earth are full of Thy glory.
Hosanna in the highest.

The tenor solo from the ninth movement will be sung by a group of tenors consisting of members of the Mormon Tabernacle Choir.

“Requiem deals with the concept of the Latin Requiem mass, but the themes still … resound with Latter-day Saints,” said Scott Barrick, general manager of the Mormon Tabernacle Choir. “We understand the sadness and grief of sin, and we know that no unclean thing can stand in the presence of God. But we also have a hope in a glorious resurrection that comes to fulfillment.”

Collaboration between the Mormon Tabernacle Choir and Utah Symphony spans many decades and includes a performance before the entire world during the opening ceremony of the 2002 Olympic Winter Games in Salt Lake City.

The Gift of Music concert series began in 1983 following discussions between President Gordon B. Hinckley (1910–2008) and his neighbor and friend, Obert C. Tanner. He and his wife, Grace, later endowed a trust as a gift to the community.

The approximately 5,600 tickets for the 90-minute concert were distributed by random selection through Temple Square Events online.