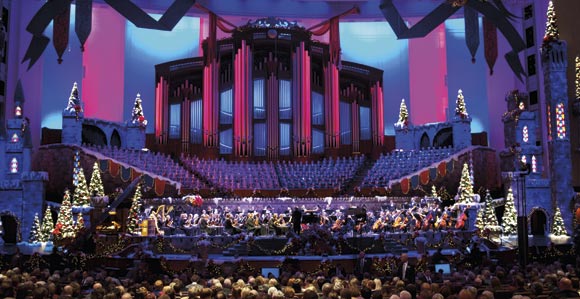 “The peace and joy the choir and orchestra bring to audiences is our gift at this time of year when the world stops to commemorate the birth of our Lord and Savior, Jesus Christ.” —Ron Jarrett, president of the Mormon Tabernacle Choir

The Mormon Tabernacle Choir and Orchestra at Temple Square have announced that Tony Award-winning tenor Alfie Boe and news journalist Tom Brokaw will be the featured guest artists at this year’s Christmas concerts, December 13, 14, and 15 in the Conference Center in Salt Lake City, Utah.

Concerts will be held Thursday, December 13, at 8:00 p.m. (dress rehearsal), and Friday and Saturday, December 14–15, at 8:00 p.m. and last approximately 90 minutes. The guest artists will also join the choir and orchestra for the weekly Music and the Spoken Word broadcast and a mini-concert on Sunday, December 16, at 9:30 a.m. The concert will be recorded and broadcast over the Public Broadcasting Service (PBS) just prior to next year's Christmas concert.

Those who are interested may also watch Sunday's broadcast of Music and the Spoken Word to see the guest artists perform some of the musical numbers from the concert.

“Alfie Boe is a fantastic artist, and we are thrilled to host a performer of his caliber. The narration delivered by Tom Brokaw with his iconic and powerful voice will perfectly complement the musical performances,” said Ron Jarrett, president of the Mormon Tabernacle Choir. “Audiences are in for incredible performances of story and song.”

Alfie Boe is a celebrated British tenor with years of formal opera training. He performed as Jean Valjean at the Les Misérables 25th anniversary concerts in London’s O2 Arena and was the lead in a new staging of La Bohème on Broadway, for which he won a Tony.

Tom Brokaw is best known for being the face and voice of NBC Nightly News, which he anchored for more than two decades. He is a familiar face to the choir, having worked with them during the 2002 Olympics. Soon after collaborating with Mr. Brokaw for 9/11: Rising Above, a Music and the Spoken Word special broadcast in 2011, the choir invited Mr. Brokaw to return for this year’s concerts.

Each year for more than a decade, thousands in the community have eagerly anticipated the traditional Christmas concerts.

“The peace and joy the choir and orchestra bring to audiences is our gift at this time of year when the world stops to commemorate the birth of our Lord and Savior, Jesus Christ,” Jarrett said.

Free tickets for these concerts and the Music and the Spoken Word broadcast will be distributed via a random selection process.

Individuals may register at ChurchofJesusChrist.org/events for the opportunity to receive tickets from Saturday, October 13, 2012, at 12:01 a.m. through Monday, October 22, 2012, at 11:59 p.m. Those without Internet access may register over the phone at 801-570-0080 (local) or 1-866-537-8457. All registrations received during those two weeks will have equal chances at receiving tickets in the random selection process.

Standby tickets for those without tickets will not be issued. However, patrons are invited to stand by for all events. The standby line will form at the north gate on Temple Square. Overflow seating will be available in the Tabernacle and the Assembly Hall.

The doors of the Conference Center will open at 6:30 p.m. for the evening performances and at 8:00 a.m. for the December 16 broadcast. Seating is limited to those 8 years of age and older. Given the increase in traffic due to other scheduled downtown holiday events, guests are asked to allow extra time for travel and parking in order to be seated 30 minutes before the performance begins.