October Latino Program to Commemorate Christ’s Visit to the Americas

Contributed By By Monica Lunardelli, Church News and Events 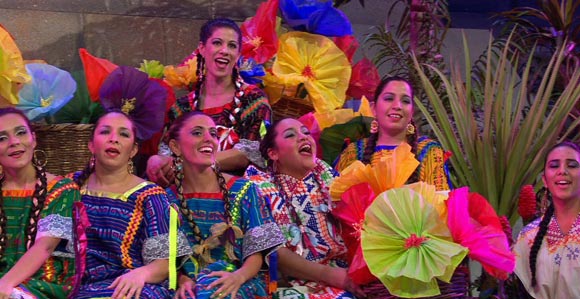 In the last Latino cultural event, participants shared their beliefs and cultural background in an evening of music and dance.

“It’s an event to bring everyone together. It’s also a missionary event to share the gospel, and we will do it through our cultures and the talents that we get from our Heavenly Father.” —Malcolm Botto, artistic director.

This year, the Church will present Luz de las Naciones: Sus Promesas, a Latino cultural program, on October 26 and 27, at 7:30 p.m. in the Conference Center auditorium.

The cultural program will be presented in Spanish only, but a limited number of headphones will be available for those who would like to listen to the event in Portuguese or English. Conference Center doors will open at 5:30 p.m., and those attending should be seated by 7:15 p.m. Sunday dress is encouraged.

There will not be a live broadcast, but the show will be recorded for a future broadcast. Details of the broadcast will be announced later.

Prior to the event, individuals can view a Conference Center exhibit featuring art from Latin American and Polynesian artists, as well as photographs of the first Spanish-speaking unit in Utah. The art is selected from the Ninth International Art Competition. The exhibit will run from October 19 to November 30.

Luz de las Naciones: Sus Promesas is a combined effort of more than 900 volunteers from all over Utah to celebrate cultures and share the gospel.

A 364-voice adult choir, 120-voice children’s choir, and more than 350 dancers and actors will commemorate the coming of Jesus Christ to the Americas.

Dan Wilson, a member of the excutive planning committee for this event, has overseen the two previous cultural programs. He said the presentation helps to strengthen the cultural identity of those participating and those in the audience.

“Many times the parents will come to me and say, ‘Thank you,' and thank the Church leaders for putting this on. [They also say], 'This has helped my children to understand who I am and where I came from,’” Brother Wilson said.

The event is for everyone, not just Latinos or members of the Church.

“It’s an event to bring everyone together,” said Malcolm Botto, the artistic director of the show. “It is also a missionary event to share the gospel, and we will do it through our cultures and the talents that we get from our Heavenly Father.”

Brother Wilson noted that during the last two cultural programs, which occurred in 2004 and 2006, many people who attended and were not members requested copies of the Book of Mormon to learn more about what was portrayed on stage.