Manti Pageant Tells Of Mormon History Through The Years 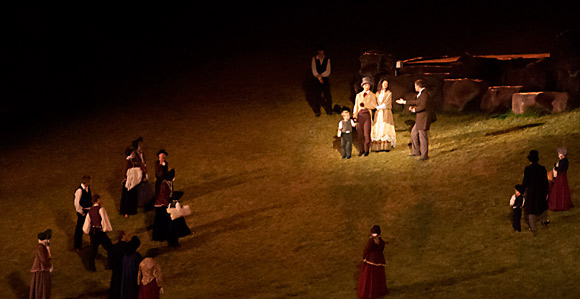 The annual Mormon Miracle Pageant in Manti, Utah, intertwines the Restoration with the stories of the pioneers and the people of the Book of Mormon, to bring viewers a free, inspiring production.

On June 16–18 and 21–25 at the foot of the Manti Utah Temple, the Mormon Miracle Pageant historical drama will reenact the Restoration of the Gospel, the Book of Mormon story, and the pioneers’ journey to the Sanpete Valley, where the Manti temple stands.

A cast of more than 900 will represent Church history events that occurred in the Americas, including the early Saints’ persecution, the martyrdom of Joseph Smith, and the Nephites’ experience seeing the resurrected Christ.

During the past few years, major enhancements have been made to the production: all the sets have been replaced; every scene in the pageant has been newly staged, and most costumes have been redesigned. The scene of the resurrected Christ's appearance to the people on the American continent has also been added to the pageant.

Admission to the pageant is free and available on a first-come, first-served basis. Weekends are more crowded than weeknights. Plan on arriving early for the best seats. Gates open at 6 p.m. The performance begins at 9:30 p.m. and runs for two hours.

More than 14,000 seats will be available, with additional room on temple grounds for blankets. Personal chairs may be set up outside the seating area, but are not permitted on the temple grounds.