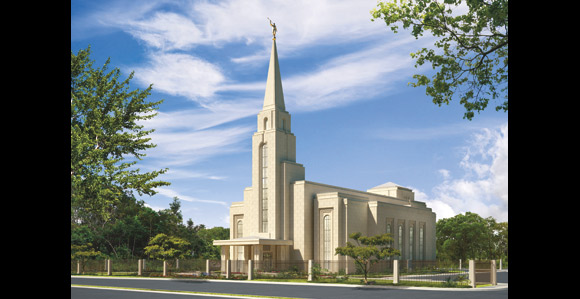 The Manaus Brazil Temple will be the sixth temple built in Brazil.

The First Presidency invites members and the public to visit the Manaus Brazil Temple between May 18 and June 2, 2012, excluding Sundays, prior to its dedication on June 10, 2012.

Free tickets are available for those interested in touring the 137th temple of the Church during the public open house.

First announced in May 2007, the temple will be formally dedicated in three sessions, which will be broadcast to meetinghouses throughout Brazil. The dedication will occur just 10 days before the fourth anniversary of the groundbreaking ceremony for the temple.

The temple will open for all patrons the Tuesday following the dedication, on June 12, 2012.

This will be the sixth temple built in Brazil. Other temples are located in Campinas, Curitiba, Porto Alegre, Recife, and São Paulo, and construction has begun on the Fortaleza Temple.