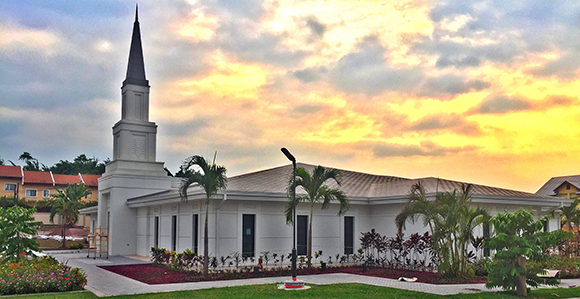 A free open house for the Kinshasa Democratic Republic of the Congo Temple in Africa will begin Tuesday, March 12, 2019, and continue through Saturday, March 30, 2019, except for the Sundays of March 17 and 24.

Current information about reservations for the open house can be found at ChurchofJesusChrist.org/temples/open-houses

The temple will be dedicated on Sunday, April 14, 2019. A youth devotional with leaders of The Church of Jesus Christ of Latter-day Saints is planned for Saturday, April 13, 2019. It will be broadcast to all congregations of the Church in the Kinshasa Democratic Republic of the Congo Temple District.

Additional details regarding the temple dedication will be announced at a future date in the dedication event article.

President Thomas S. Monson announced the temple during the October 2011 general conference. The groundbreaking ceremony February 12, 2016, was attended by Elder Neil L. Andersen of the Quorum of the Twelve Apostles. The temple will serve more than 42,000 Church members living in the country.

This will be the fourth temple in Africa; three others are currently operating in Johannesburg, South Africa; Accra, Ghana; and Aba, Nigeria. The Durban South Africa Temple is under construction and the Abidjan Ivory Coast (Côte d’Ivoire) Temple, Nairobi Kenya Temple, and the Lagos Nigeria Temple have been announced.

The Church currently has 189 temples either in operation, announced, under construction, or being renovated around the world. The Kinshasa Temple will be the 163rd operating temple.