As the Joseph Smith Memorial Building, formerly the Hotel Utah, turns 100 this year, those with memories of the historic building are invited to share their experiences and recollections.

“My family and I have reverence and respect for this grand building where my grandfather dedicated his whole life’s work, culinary talent, and passion for the reputation of the Hotel Utah. We are pleased to participate in this 100th anniversary celebration.” —Joanne Milner

Giovanna Fortunata Furano remembers going to the Hotel Utah as a small child to see and visit her father, Antonio “Tony” Furano, in the kitchen, where he worked for 45 years as a culinary artist. Tony’s granddaughter Joanne R. Milner recalls her mother’s stories from the past century about birthday and Easter treats from the Hotel Utah kitchens, as well as delectable wedding receptions held in beautiful rooms of the hotel. 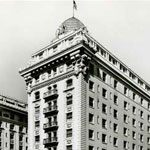 View a photo gallery of the Hotel Utah and Joseph Smith Memorial Building.

With the 100th anniversary of the Hotel Utah/Joseph Smith Memorial Building approaching, Temple Square Hospitality is inviting the public to share Hotel Utah memories like this one at hotelutah100.com.

The elegant edifice turns 100 on June 9, 2011. The 10-story white building served as the gathering place in Salt Lake City—hosting locals, travelers, celebrities, and every U.S. president from William Taft to Ronald Reagan—from the time it first opened in 1911.

Tony Furano first discovered the hotel in 1919 when hotel Chef Louis hired him as a chicken butcher due to his experience working on the family farm in Savuto di Cleto, Italy. Tony eventually became “King of the soups and sauces with a title of “Saucier.”

“Tony had never read or consulted a cookbook,” the old hotel newsletter read. “Born with the instinctive flair for seasoning and most sensitive and discriminating taste buds, plus his habit of writing everything that was taught him about cooking in a small notebook he always carried, he had no need for cookbooks.” Some of his recipes [link to recipe pages] have survived and are still used by family today.

It was during the 45 years Tony worked at the Hotel Utah that he met and married his wife, Matilda Mariani, after a courtship that included sitting on the front porch after work and eating sandwiches from the hotel.

Closed in 1987 for extensive redesign and renovation and then reopened in 1993 as the Joseph Smith Memorial Building, this historic building has since welcomed many to its three restaurants, multiple banquet rooms, FamilySearch center, and Legacy Theater, as well as served as office space for The Church of Jesus Christ of Latter-day Saints.

The timeless pioneer craftsmanship mingled with modern, state-of-the-art technology, equipment, and food is, and will continue to be, a legacy near and dear to the hearts of many in the Salt Lake Valley and beyond, whether their interaction with the building was as guest, visitor, or employee.

For Joanne R. Milner, it embodies 100 years of faith, family, friends, and food.

“My family and I have reverence and respect for this grand building where my grandfather dedicated his whole life’s work, culinary talent, and passion for the reputation of the Hotel Utah,” she writes in her blog post [link]. “We are pleased to participate in this 100th anniversary celebration.”

A number of events are being planned for the building’s centennial celebrations in June, but are yet to be announced.