President Russell M. Nelson, President of the Quorum of the Twelve Apostles, will address single adults worldwide on Sunday, January 8, 2017.

The worldwide devotional for young adults—originating from the Marriott Center on the campus of Brigham Young University in Provo, Utah—will be transmitted live on the Church satellite system, ChurchofJesusChrist.org, and other media at 6:00 p.m. (Mountain Standard Time).

All young single adults (ages 18–30), students who will be finishing high school or the equivalent by the end of April 2017, and married young adults are invited to attend.

Shortly after the live broadcast, a recording of the devotional will be archived on devotionals.ChurchofJesusChrist.org and on the Gospel Library app. That recording may be streamed or downloaded at any time.

For available languages and other details, please see the broadcast schedule. Recordings in all approved languages will be available by Friday, January 13, 2017. 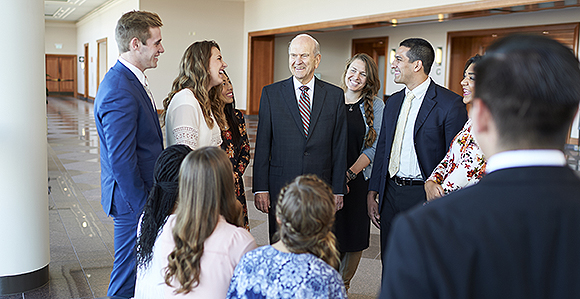 President Russell M. Nelson, President of the Quorum of the Twelve Apostles, will be the speaker at a worldwide devotional for young adults on January 8, 2017.