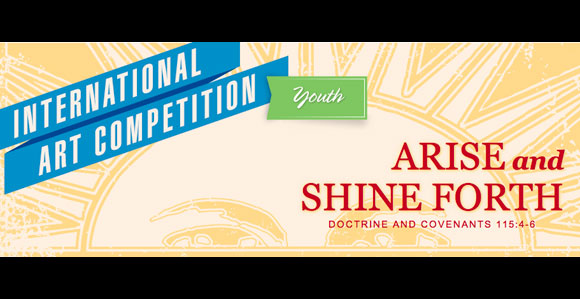 For the first time, an international art competition for youth ages 13 through 18 is being featured in an exhibition at the Church History Museum in Salt Lake City.

Some 80 pieces of fine art, including both two-dimensional and three-dimensional works, are included, reflecting the theme “Arise and Shine Forth.” Coinciding with this year’s Mutual theme for Young Men and Young Women, it is taken from this scriptural passage:

“Verily I say unto you all: Arise and shine forth, that thy light may be a standard for the nations;

“And that the gathering together upon the land of Zion, and upon her stakes, may be for a defense, and for a refuge from the storm, and from wrath when it shall be poured out without mixture upon the whole earth” (D&C 115:5–6).

“I was really impressed at the way the participants all took a different angle and a different direction and really found their own voice and way to express that concept,” said Angela Ames West, exhibit team coordinator.

She pointed out, for example, an entry titled “Choose You This Day” from Megan Warner Taylor, 18, of Utah. It is a digitally composed work of photography, a multifaceted self-portrait taking a modern approach to Christ’s parable of the ten virgins as recounted in Matthew 25:1–13.

“She has identified it as being about how the choices we make determine who and what we become spiritually,” Sister West noted. Each of the 10 images in the work are of the artist herself in various forms of costume and setting symbolizing five vices and five virtues that youth face today in the choices they make. Shown from left to right, the vices illustrated are a judging heart, noise and distractions of the world, extremes (no balance), materialism, and pride. The virtues, which coincide with the Church’s Young Women values, are knowledge, divine nature and individual worth, choice and accountability, good works, integrity, and faith and virtue.

A piece by 13-year-old Jacob Law of Washington was constructed from elements of a discarded computer motherboard placed on hardboard. It is based on the story of Shadrach, Meshach, and Abed-nego, who refused to bow to the idol that King Nebuchadnezzar built. The three are depicted in a fiery furnace with a fourth figure who looked “like the Son of God” (Daniel 3:24–25). “I want to do what is right and avoid addictions to things like computers, video games, and pornography,” the artist wrote in the description of his work. “Those are some of the idols of today. The young men were not touched by the fire around them because they chose the right.”

Sister West pointed out an interactive element of the exhibition.

“Our goal with this is to reach out to our visitors who maybe feel like they couldn’t contribute to this exhibit because they’re not fine artists,” she said. The interactive element features a shack with a lighthouse. Visitors will be invited to use available paper and colored pencils to draw sketches that reflect what the theme “Arise and Shine Forth” means to them. These will then be displayed on the lighthouse “that will become a work of art created by our visitors over time,” Sister West said.

The competition was publicized in the Church’s New Era magazine, international publications, and websites and through announcements made in local Church units, seminaries, and institutes. This attracted entries from the United States, Austria, Taiwan, Japan, the Philippines, Colombia, Guatemala, and Argentina, among other locales.

A six-member Youth Humanities Council selected by museum staff from applications sent in by youth helped with every part of the exhibition, including the jurying, curating, and display location. “It’s the first such community assistance we’ve received in curating an exhibit,” Sister West said.

The new exhibition opened November 16 and will be on display through June 17, 2013.