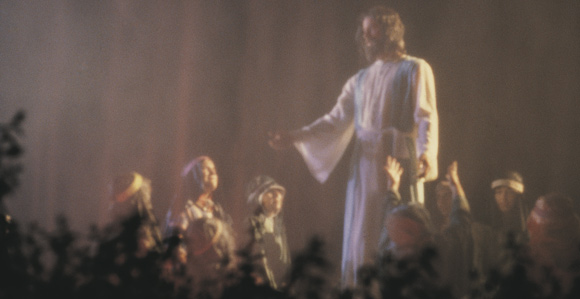 In one scene from the Hill Cumorah Pageant, the visit of Jesus Christ to the Nephites is reenacted.

In July 2012, “America’s Witness for Christ”—the Hill Cumorah Pageant of The Church of Jesus Christ of Latter-day Saints—will celebrate its 75th anniversary.

The pageant has been an annual event in Palmyra, New York, USA, since 1937. Each July, seven evening performances are presented on the Cumorah hillside, next to the visitors’ center. The pageant tells the story of the Book of Mormon: Another Testament of Jesus Christ on an enormous 10-level stage, with 12-tower lighting, a state-of-the-art sound system, Hollywood-style special effects, and a costumed cast of more than 650 volunteers.

Before each performance begins this season, there will be historical exhibits showcasing the pageant through the years. There will also be reunions for the cast and crew of previous pageants and reunions for missionaries who served in the upstate New York region.

The thousands of members who have participated in the pageant over the years are invited to contribute their memories and experiences to the anniversary blog.