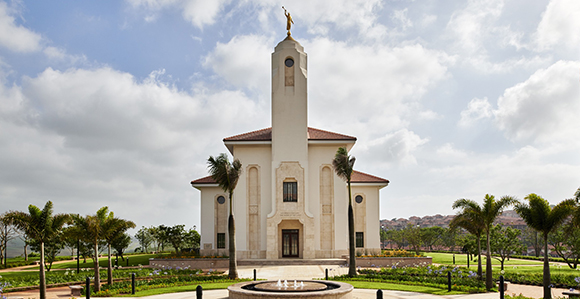 The Durban South Africa Temple, which will be dedicated on February 16, 2020.

The Durban South Africa Temple will be dedicated on Sunday, February 16, 2020, in three sessions: at 9:00 a.m., noon, and 3:00 p.m. Each session will be broadcast to meetinghouses throughout the temple district.

A youth devotional with Church leaders will be held the prior evening, Saturday, February 15, and broadcast to meetinghouses within the temple district.

The temple will be open for all ordinances on Tuesday, February 25, 2020.

Currently, the Church has 164 operating temples worldwide, with another 15 under construction and 30 more having been announced.

The Church has operating temples in Aba, Nigeria; Accra, Ghana; Johannesburg, South Africa; and Kinshasa, Democratic Republic of the Congo. A temple in Abidjan, Ivory Coast, is under construction, and temples in Harare, Zimbabwe, and Nairobi, Kenya, have been announced.