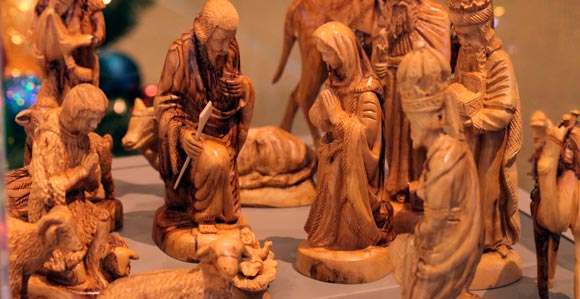 Nativities in the Church History Museum’s Christmas exhibit are made from materials including fired terra cotta, carved olive wood, marzipan, metal, and fabric, among others.

Visitors to the Church History Museum’s annual Christmas exhibit will be treated to a stunning array of crèche (nativity) scenes from around the world, which will be on display through January 8, 2012.

The items on display come from such diverse places as Germany, India, Nigeria, Poland, Sri Lanka, Sweden, and Zaire, to name a few.

“Almost all of them are from the museum collection,” said museum education manager Ray Halls, “and many are by Latter-day Saints.”

Brother Halls enjoys seeing how people of different cultures express themselves. “In these crèche scenes, you can see goats, turkeys, a lion, a jaguar, and even an ostrich participating in the event of the birth of Jesus,” he said.

He also pointed out the unique gifts given to the Savior, which include items like the bushel of corn and traditional blankets found in the Mayan tradition crèche scene.

The materials used to make the crèche sets include fired terra cotta, carved olive wood, marzipan, metal, and fabric, among others. “I love how each country takes the birth of the Savior and personalizes it into its own culture,” Brother Halls said.

Sculptures, paintings, and a quilt are also displayed to complement the crèche sets. “We have enhanced the exhibit with other works of art,” Brother Halls said. “Even our new MicroTiles screen is part of the display—we have people telling Christmas stories and the Mormon Tabernacle Choir singing to you as you enter the museum.” 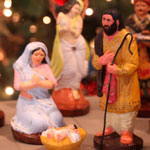 An Italian painting by an unknown artist is the oldest in the museum collection and depicts the baby Jesus with his mother, Mary. A Walter Rane painting shows the boy Jesus working with his carpenter father, Joseph.

One special item loaned to the museum for the seasonal display is a quilt titled Day of Joy and Mercy designed by Sara Morgan, a member of The Church of Jesus Christ of Latter-day Saints. The quilt was made in 2005 for the second annual St. Louis, Missouri, interfaith Crèches and Carols exhibit and was on display there for three years. It was shown later in a Christmas display at the Mesa Arizona Temple Visitors’ Center.

In describing the creative process for the quilt Sister Morgan said, “This was a spiritual journey for me, as I did not [originally] plan symbols into the quilt. About three months into the quilt [production] I was touched by the Spirit to see the symbols already there and was inspired to do the rest.”

Symbols in the quilt include three rings of light representing the three degrees of glory, thorn bush flowers representing Jesus’s atoning sacrifice, and a crying lamb representing the tears shed by those who have come to understand what Jesus has done for them.

“We’ve tried to tell the complete story from the Annunciation to birth to childhood,” Brother Halls said.

Special gallery tours conducted by volunteer docents are available Monday through Saturday for church, school, and private groups. Tours must be scheduled two weeks in advance. Call 801-240-4615 for reservations.