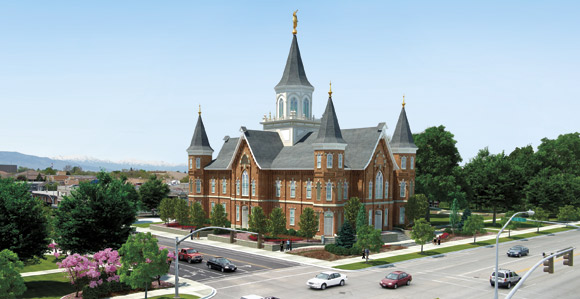 Architectural rendering of the Provo Tabernacle as it will appear when reconstructed as the Provo City Center Temple.

On April 5, 2012, The Church of Jesus Christ of Latter-day Saints announced that Elder Jeffrey R. Holland of the Quorum of the Twelve Apostles will preside over the groundbreaking for the Provo City Center Temple on May 12, 2012, at 9:00 a.m.

Similar to other groundbreakings, tickets will be required to attend the event, which will also be broadcast to stake centers in and around Provo. Tickets may be obtained through local Church leaders within the new temple district.

Following the groundbreaking, the Church will commence construction work on the new temple. The converted Provo Tabernacle will become the second temple in Provo and the sixteenth in the state. Construction of the original tabernacle took 15 years—from 1883 to 1898. The building is located on University Avenue between Center Street and 100 South.

This will be the second time the Church has converted an historic tabernacle into a temple. The Vernal Utah Temple, dedicated in 1997, was constructed within the brick exterior of the Uintah Stake Tabernacle, which was dedicated in 1907.

Historically, the Provo Tabernacle was used for Church meetings and cultural events. Since the 2010 fire, Church leaders have worked with architects, engineers, and historical experts to determine the future of the building. The project will include a complete restoration of the original exterior. To facilitate these plans the Church has recently acquired additional property near the tabernacle.