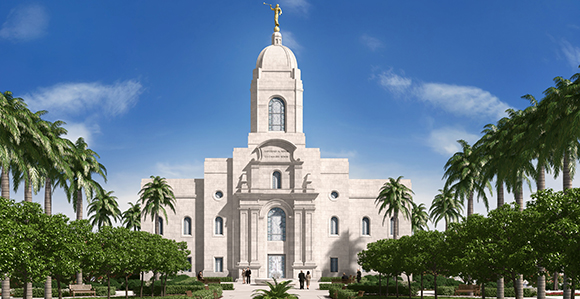 A rendering of the Arequipa Peru Temple, which will be dedicated December 15, 2019.

The Arequipa Peru Temple, the third temple in Peru, will be dedicated on Sunday, December 15, in three sessions.

The temple will open for patrons Thursday, December 19, 2019.

The Arequipa Peru Temple was announced in October 2012. Peru’s other two temples are in Lima, dedicated January 10, 1986, and in Trujillo, dedicated June 21, 2015. Ground was broken for a fourth temple in the country, the Lima Peru Los Olivos Temple, on June 8, 2019.

Peru is home to approximately 30 million people, including over a half million members of the Church. Missionary work officially began in 1956. Church members in Arequipa, Peru’s second most populous city, currently attend temple services in Lima, nearly 500 miles away.