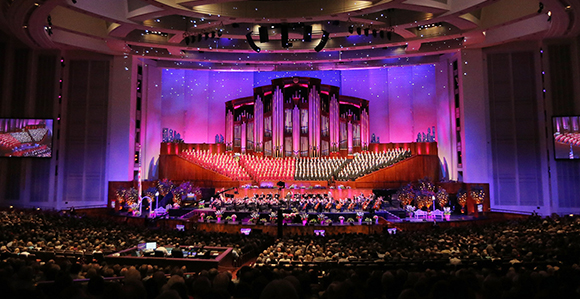 The Tabernacle Choir and Orchestra at Temple Square will present their annual concert held in conjunction with Pioneer Day celebrations marking the arrival of the Mormon pioneers to the Salt Lake Valley in Utah on July 24, 1847.

The Music for a Summer’s Evening: 2019 Pioneer Day Concert will be held on Friday and Saturday, July 19 and 20, at 8:00 p.m. (mountain daylight time) in the Conference Center in Salt Lake City, Utah. Additional information on ticket distribution will be available in mid-June.

Sissel, the world-renowned vocalist known for her ethereal arias throughout the Oscar-winning film Titanic, will be the featured guest artist.

Choir fans will remember Sissel’s performances at the 2006 Christmas concerts on Temple Square. The subsequent CD, Spirit of the Season (2007), was No. 1 on Billboard’s classical chart for nine weeks and was nominated for two Grammy Awards: best classical crossover album and best engineered classical album.

“We are honored to have Sissel perform with us again,” Wilberg said. “The sincerity and purity of her voice captivates everyone who hears it. We first met her when she appeared with the choir on Music and the Spoken Word in 2005, celebrating Norway’s 100th anniversary. We count her as one of the choir’s closest friends.”

In addition to the Spirit of the Season CD, Sissel can also be found on two other choir and orchestra recordings: Homeward Bound with Bryn Terfel (2013) and Mormon Tabernacle Choir & Friends (2017).

On July 20, the concert will be streamed live on thetabernaclechoir.org, the Tabernacle Choir YouTube page, ChurchofJesusChrist.org, mormonchannel.org, and BYUtv in English. It will also be live streamed on the Mormon Channel’s YouTube language channels in Spanish, Portuguese, French, and German.

The concert will be archived for on-demand viewing in English immediately following the live-stream concert. On-demand videos in Spanish, Portuguese, French, and German will be available by July 30 on motab.org/pioneerday.

Stake technology specialists may wish to refer to the Church broadcast schedule when it becomes available several weeks before the event.

Tickets for the concert are free and will be distributed on a first-come, first-served basis beginning on June 18 through ChurchofJesusChrist.org/events or by phone at 801-570-0080. Each patron may request four tickets, and admission is open to those ages eight and older. Patrons without tickets are encouraged to join the standby line by the flagpole on Temple Square for last-minute seating, which is often available.