The Mormon Tabernacle Choir and Orchestra at Temple Square will present their annual concert held in conjunction with community-wide Pioneer Day celebrations. Joining the choir and orchestra for this special “Music for a Summer Evening” concert will be The King's Singers, England’s six-man a cappella vocal ensemble.

The concert will be held on Friday and Saturday, July 22 and 23, at 8:00 p.m. in the Conference Center and will be conducted by Mack Wilberg, music director of the choir, and Ryan Murphy, associate music director. The Pioneer Day celebration commemorates the arrival of the Mormon pioneers in the Salt Lake Valley, July 24, 1847. The program will include songs from England, Scotland, Ireland, and Wales in honor of the British pioneers who journeyed to the Salt Lake Valley.

The concert will be streamed in on Saturday, July 23, at 8:00 p.m. in English on mormontabernaclechoir.org, the Mormon Tabernacle Choir YouTube page, ChurchofJesusChrist.org, mormonchannel.org, and BYUtv.

It will also be broadcast over the Church satellite system in English, Spanish, Portuguese, French, and German on July 23. Closed-captioning will be available in English only.

The concert will be archived for on-demand viewing in English immediately following the live-stream concert.  On-demand videos in Spanish, Portuguese, French, and German will be available on Wednesday, July 27, on motab.org/pioneerday.

The King’s Singers are acclaimed worldwide for their virtuosity, energy, and charm. The group was honored in 2009 for its Signum Classics release “Simple Gifts” and again in 2012 for its contribution to Eric Whitacre’s “Light and Gold” album on Universal/Decca.

The King’s Singers are one of the Mormon Tabernacle Choir’s most frequent collaborators. They have appeared on the “Music and the Spoken Word” broadcast. In fact, they will join the choir for the broadcast on Sunday, July 24, in the Conference Center at 9:30 a.m. The audience should be in their seats by 9:15 a.m. No tickets are required for that performance.

They were also the featured guests on the 2007 Christmas concerts with the choir and orchestra, as well as on one of the Cultural Olympiad concerts held in the Tabernacle during the 2002 Olympic Winter Games. 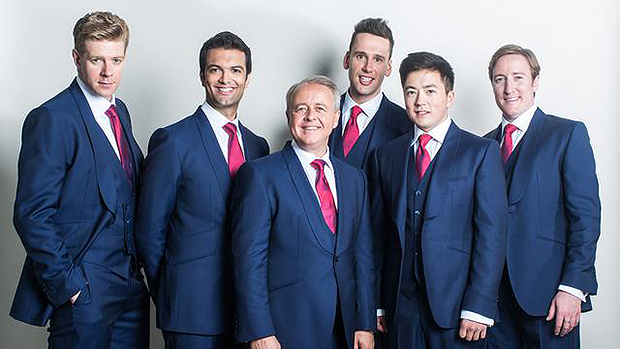 The King's Singers, England’s six-man a cappella vocal ensemble, will join the Mormon Tabernacle Choir and Orchestra on Temple Square for a pair of concerts to celebrate Utah's Pioneer Day festivities. The program also will be available via live stream and on demand.

Free tickets for the concert are required. Tickets are available on a first-come, first-served basis at ChurchofJesusChrist.org/events, by calling 801-570-0080, or at the Conference Center ticket office. Admission to this event is limited to those ages eight and older.

Standby tickets for those without tickets will not be issued. However, patrons are invited to stand by for last-minute seating each evening. The standby line will form at the north gate on Temple Square at 6:30 p.m. for the evening performances.

These summer concerts featuring music by the choir and ochestra have been a long-standing tradition. Recent guest artists have included Laura Osnes (2015), Santino Fontana (2014), Nathan Pacheco and Lindsey Stirling (2013), Katherine Jenkins (2012), and Linda Eder and Brian Stokes Mitchell (2011), Prior concerts have been filmed and later rebroadcast on BYU Television. The summer concert of 2012 with Katherine Jenkins won for the Choir its second Emmy Award. (The choir has since added a third Emmy Award for its Tanner Gift of Music concert with James Taylor.)