2014 Auditions Set for Salt Lake “Savior of the World” 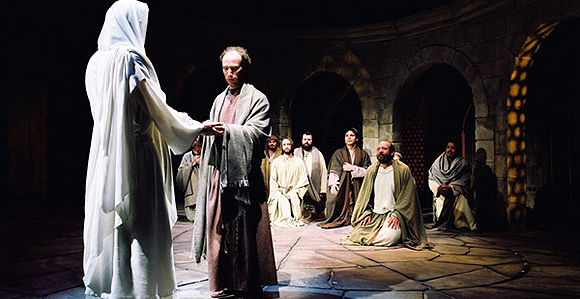 Producers of Savior of the World are seeking cast members for the 2014 production. Participants need not be professionals but should have a desire to share a witness of Jesus Christ.

The Music and Cultural Arts Division of the Church invites adults and families (with children ages 8 and older) to participate in the 2014 production of Savior of the World: His Birth and Resurrection. Members of the Church are encouraged to invite their friends or family of other Christian faiths to audition with them. We invite individuals from all ethnicities to audition.

Auditions for lead and ensemble roles are available by appointment by calling 801-240-2551 or sending an email to culturalarts@ChurchofJesusChrist.org. Walk-ins are also welcome.

Those interested in an ensemble role should prepare to sing a hymn or Primary song as an individual or as a family. For lead roles, please bring a résumé and prepare to sing 16 bars of a song that demonstrates your vocal range and ability.

Savior of the World is a two-hour musical production performed in the Conference Center Theater in Salt Lake City, Utah. It is based on the events surrounding the birth and Resurrection of Jesus Christ and was first performed in 2000 for the inauguration of the Church’s Conference Center Theater. Performances will begin November 21, 2014, and will run through January 3, 2015.