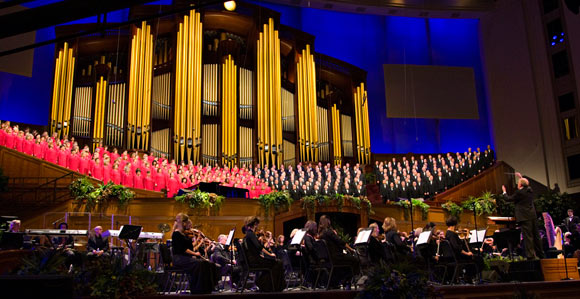 The Mormon Tabernacle Choir and Orchestra at Temple Square will present their annual concert held in conjunction with community-wide Pioneer Day celebrations on Friday and Saturday, July 20 and 21, at 8:00 p.m. in the Conference Center in Salt Lake City, Utah.

This year’s concert, entitled “The Joy of Song,” will be conducted by Mack Wilberg, music director for the choir and will feature British singing sensation Katherine Jenkins, who is known for being the most prolific classical crossover artist in the world.

“I am looking forward to singing with the 360 voices of this incredible choir,” said Miss Jenkins. “It will be an honor and a pleasure.”

The concert will open with a salute to the Mormon pioneers who settled the Salt Lake Valley and will then feature a variety of music showcasing the versatility of both the guest artist and the choir and orchestra, including songs from the Broadway stage and Hollywood screen.

“It’s like Christmas in July,” said Mac Christensen, president of the Mormon Tabernacle Choir. “It is our privilege to provide concerts with some of the world’s most talented performers for our community during the holiday season and Pioneer Day celebrations.”

The choir and orchestra will join with Miss Jenkins on several numbers, and the orchestra will accompany her on several solo numbers. Interspersed with the musical numbers will be multimedia presentations of well-known personalities discussing the joy they find in music.

Free tickets are required for these concerts. They will be distributed through a random selection process due to the high demand for them. Individuals may register for tickets between May 19 and May 28 at www.ChurchofJesusChrist.org/events.

Those without Internet access may register over the phone at (801) 570-0080 (local) or at 1-866-537-8457 (toll free). All registrations received during those two weeks will have an equal chance at receiving tickets in the random selection process. Only one registration per household can be accepted, and the maximum number of tickets that a household may request is four.

Standby tickets for those without tickets will not be issued. However, patrons are invited to stand by for last-minute seating each evening. The standby line will form at the North Gate on Temple Square at 6:00 p.m. for the evening performances.

The concert will also be shown at various LDS stake centers over the Church satellite system on Saturday, July 21, with subsequent rebroadcasts to many areas of the world.

Individuals not able to attend the concert in person may watch a broadcast of it (available in ASL, English, French, Portuguese, and Spanish) at ChurchofJesusChrist.org and mormonchannel.org on Saturday, July 21, 2012, at 7:00 p.m. MDT. This recording will be available until Sunday, July 22, at 9:30 p.m. MDT.