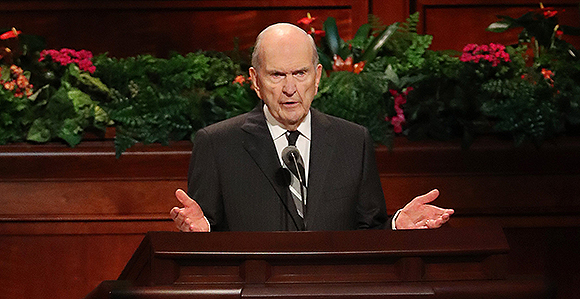 President Russell M. Nelson invited members find a way to regularly serve and worship in the temple before he announced plans to construct 12 temples, the largest number of temples ever announced on the same day. The Salt Lake Temple and other pioneer-era temples will be renovated in the coming months, he said.

President Russell M. Nelson explained that the August statement about a “course correction” for the name of the Church came “because the Lord impressed upon my mind the importance of the name He decreed for His Church, even The Church of Jesus Christ of Latter-day Saints.”

“Thus, the name of the Church is not negotiable. When the Savior clearly states what the name of His Church should be, and even precedes His declaration with, ‘Thus shall my church be called,’ He is serious. And if we allow nicknames to be used and adopt or even sponsor those nicknames ourselves, He is offended.”

President Nelson encouraged members to “be courteous and patient” in their efforts “to restore the correct name of the Lord’s Church” and promised that the Lord “will pour down His power and blessings upon the heads of the Latter-day Saints, the likes of which we have never seen. We will have the knowledge and power of God to help us take the blessings of the restored gospel of Jesus Christ to every nation, kindred, tongue, and people and to prepare the world for the Second Coming of the Lord.”

The Prophet Issues Four-Part Invitation to Women of the Church

Building on his invitation to youth to participate in “the greatest work on earth today” to “help gather Israel on both sides of the veil” the prophet called on the women of the Church to join the cause by doing four things:

The following General Authority Seventies were released and given emeritus status:

And the following General Authority Seventy was sustained:

The following Area Seventies were released:

Changes Help Balance Gospel Instruction at Home and at Church

As part of ongoing efforts to help Latter-day Saints “learn doctrine, fortify faith, and foster heartfelt worship,” President Russell M. Nelson announced adjustments to help balance the unique and essential ways members worship and learn and live the Savior’s gospel both at church and at home.

Church leaders are encouraging individuals and families to improve gospel learning and living at home and have released a new home-centered, Church-supported curriculum. They have also announced changes to the Sunday meeting schedule, beginning in January 2019. For more information, visit sabbath.ChurchofJesusChrist.org.

The Mormon Tabernacle Choir announced October 5 that it is changing its name to The Tabernacle Choir at Temple Square. The Choir’s announcement follows a statement by the Church in August 2018 encouraging the use of the full name of the Church. (See related story.)