Coverage of the April 2015 General Conference 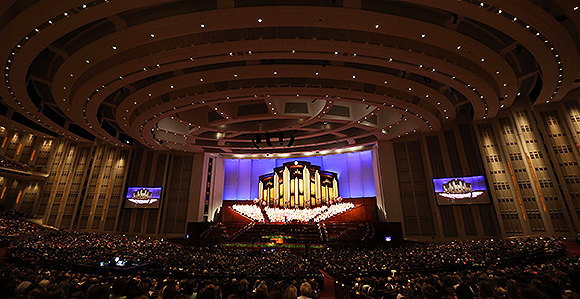 Use this page to find news summaries of conference addresses and photo galleries from each session.

► Rafael E. Pino: The Eternal Perspective of the Gospel

► Jorge F. Zeballos: If You Will Be Responsible

► Joseph W. Sitati: Be Fruitful, Multiply, and Subdue the Earth

► Russell M. Nelson: The Sabbath Is a Delight

General Authorities from a variety of nationalities gave sermons, some of them in languages other than English, at the closing session of the Church’s 185th Annual General Conference Sunday afternoon.

President Thomas S. Monson presided, as he had done throughout the conference. President Dieter F. Uchtdorf, Second Counselor in the First Presidency, conducted the session, with Elders S. Gifford Nielsen and Koichi Aoyagi of the Seventy giving the invocation and benediction respectively.

Topics included religious freedom, enduring to the end, the eternal perspective of the gospel, the spreading forth of the kingdom of God, fulfilling divinely given responsibilities, multiplying and subduing the earth, and Sabbath observance.

The Mormon Tabernacle Choir, directed by Mack Wilberg and Ryan Murphy, with Linda Margetts and Bonnie Goodliffe as organists, provided music for the session.

On this Easter Sunday, the selections pertained directly to the Lord Jesus Christ: “My Redeemer Lives,” “He Sent His Son,” “Tell Me the Stories of Jesus,” and “Lord, I Would Follow Thee.” The congregation sang “Come, O Thou King of Kings.”

► José A. Teixeira: Seeking the Lord

► Gérald Caussé: Is It Still Wonderful to You?

On a sunny Easter morning, thousands of people filled the Conference Center on Temple Square to celebrate the Savior’s Resurrection and listen to the inspiring words of Church leaders.

“For the past two years as we have concentrated our efforts on completing previously announced temples, we have held in abeyance plans for any additional temples,” President Monson explained. “This morning, however, I am very pleased to announce three new temples. … What marvelous blessings are in store for members in these areas and indeed wherever temples are located through the world.”

The Mormon Tabernacle Choir, under the direction of Mack Wilberg and accompanied by Clay Christiansen and Richard Elliott, provided the music for the morning’s session. The choir performed “Rejoice, the Lord Is King,” “He Is Risen,” “Consider the Lilies,” “Jesus Has Risen,” and “Christ the Lord Has Risen Today.” The congregation joined in to sing “I Know That My Redeemer Lives.”

► Ulisses Soares: Yes, We Can and Will Win!

Thousands gathered in the Conference Center Saturday night for the priesthood session of the 185th Annual General Conference.

President Thomas S. Monson presided at the event and spoke of the sacred gift of the priesthood.

“Let us consider our callings,” President Monson said. “Let us reflect on our responsibilities; let us determine our duty; and let us follow Jesus Christ, our Lord. While we may differ in age, in custom, or in nationality, we are united as one in our priesthood callings.”

Topics of the evening’s sermons included fatherhood, personal righteousness, and personal prayer. One highlight of the session was when Elder Ulisses Soares spoke in his native tongue, Portuguese.

A priesthood choir from Brigham Young University, under the direction of Ronald Staheli and accompanied by Richard Elliott and Andrew Unsworth, provided music for the session. Among the hymns performed by the choir were “For the Strength of the Hills,” “On This Day of Joy and Gladness,” and “Master, the Tempest Is Raging.” The congregation joined in for the hymn “Hark, All Ye Nations!”

► Elder David A. Bednar: Therefore They Hushed Their Fears

► Wilford W. Andersen: The Music of the Gospel

► Quentin L. Cook: The Lord Is My Light

The Saturday afternoon session of the 185th Annual General Conference began with a Church auditing report given by Kevin R. Jergensen and a statistical report given by Brook P. Hales.

Speakers included Elder David A. Bednar and Elder D. Todd Christofferson of the Quorum of the Twelve. Elder Wilford W. Andersen of the Seventy related the gospel message to listening to music and stressed the importance of allowing it to play through all phases of life. Elder Dale G. Renlund of the Seventy directed his comments to Latter-day Saints and told them to keep trying and not to give up. Elder Michael T. Ringwood of the Seventy counseled people to not seek after titles, positions, and authority but to serve God and their fellowmen. Elder Quentin L. Cook of the Quorum of the Twelve counseled listeners to remember Jesus Christ, keep their covenants, and follow His example.

A combined choir from young single adult stakes in Davis and Weber Counties provided the music.

► Henry B. Eyring: “Is Not This the Fast That I Have Chosen?”

► Dallin H. Oaks: The Parable of the Sower

► L. Tom Perry: Why Marriage and Family Matters—Everywhere in the World

A sunlit, Easter weekend morning welcomed thousands to the Conference Center for the Saturday morning session of the 185th Annual General Conference.

General conference is, once again, a global event. The proceedings are being transmitted to nations around the world via television, radio, and the Internet.

President Henry B. Eyring, First Counselor in the First Presidency, was the morning’s first speaker and focused his remarks on the law of the fast. He was followed by President Boyd K. Packer, Sister Linda K. Burton, Elder Dallin H. Oaks, Elder L. Whitney Clayton, and Elder L. Tom Perry.

► Cheryl A. Esplin: Filling Our Homes with Light and Truth

► Carole M. Stephens: The Family Is of God

► Video presentation: The Family Is Ordained of God

► Henry B. Eyring: The Comforter

During a year when the Church is celebrating the 100th anniversary of family home evening and the 20th anniversary of “The Family: A Proclamation to the World,” speakers for the general women's session of the 185th Annual General Conference focused on homes and families.

Thousands filled the Conference Center in downtown Salt Lake City for the meeting, which was translated into 65 languages and sent to millions around the world via television, radio, and the Internet.

President Henry B. Eyring, First Counselor in the First Presidency, spoke of the Comforter during a time when many are praying for relief—for help in carrying their burdens of grief and loneliness.

“My message to you tonight is that you can and must be an important part of His giving comfort to those who need comfort,” said President Eyring to LDS women gathered across the globe.

President Thomas S. Monson presided at the broadcast, which was also attended by President Dieter F. Uchtdorf, Second Counselor in the First Presidency; other Church leaders; and members of the Relief Society, Young Women, and Primary general presidencies and boards.