Cheryl A. Esplin: Filling Our Homes with Light and Truth

Highlight video from Sister Cheryl A. Esplin's address at the April 2015 General Conference. 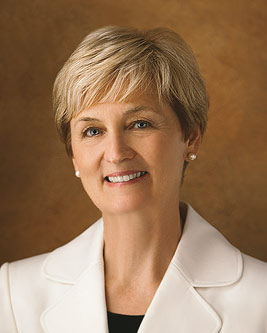 SisterCheryl A. Esplin of the Primary general presidency spoke on filling lives with the light and truth of the gospel in her address at the general women's session of conference on March 28.

Several years ago, Sister Esplin attended a meeting where a Young Women leader demonstrated the importance of being filled with the gospel by squeezing two soda cans. One had been opened and emptied, while the other was unopened and filled. She crushed the empty one easily while the full one held firm.

“When filled with the Spirit and with gospel truth,” Sister Esplin said, “we have the power to withstand the outside forces of the world that surround and push against us. However, if we are not filled spiritually, we don't have the inner strength to resist the outside pressures and can collapse when forces push against us.”

One of the best places for an individual to receive the strength from the gospel is within the family, Sister Esplin noted. “Families are the Lord's workshop on earth to help us learn and live the gospel. We come into our families with a sacred duty to help strengthen each other spiritually,” she said. Because of this, she added, Satan does everything he can to distort and separate us from the truth of the gospel.

“Strong eternal families and Spirit-filled homes do not just happen,” Sister Esplin said. They take work and each member of the family contributing to their collective strength, she declared and added that even an individual can strengthen the family by seeking truth. “We are continually counseled to increase our spiritual knowledge through prayer and through studying and pondering the scriptures and the words of the living prophets,” she said.

Sister Esplin recounted the history of her great-grandfather's sister, Elizabeth Staheli Walker, as she struggled to maintain and strengthen her testimony. After being married, Elizabeth and her family lived in Utah near the Nevada border and ran a mail station. Travelers would stay the night at their home, where Elizabeth spent days and nights cooking and serving meals for them. Some of the travelers were educated, well-read men who would talk about the “sly fraud” Joseph Smith who wrote the Book of Mormon to make money.

“All this talk made Elizabeth feel isolated and alone,” Sister Esplin said. “She was too frightened to say anything to those who ridiculed her religion. … She felt she could not have defended her belief if she had tried.”

Her family moved and Elizabeth found time to think and pray to Heavenly Father about the doubts about Joseph Smith and the Book of Mormon that troubled her. One night, she had a dream of two men on a hill. One man was speaking to another who knelt on the ground and reached into a hole with a stone lid next to it. Years later in 1893, Elizabeth went to the dedication of the Salt Lake Temple. There she saw a stained glass window depicting the scene in her dream. Elizabeth said, “In there I saw the same picture that I had seen in my dream. … I feel satisfied that I was shown in a dream a picture of the angel Moroni giving Joseph Smith the gold plates.”

Shortly before her death, Elizabeth recorded in her journal, “The thought came to me as plain as if someone had said to me, ‘Do not bury your testimony in the ground.’”

Sister Esplin said, “The answers to our prayers may not come dramatically, but we must find quiet moments to seek greater light and truth. And when we receive it, it is our responsibility to live it, to share it, and to defend it.”

Photo of Cheryl A. Esplin by Busath.com.