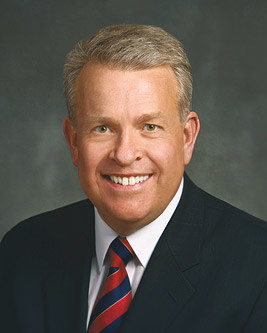 During the Sunday morning session of general conference, Elder Brent H. Nielson of the Seventy spoke about the parable of the prodigal son. “Through the parable, what does the Savior teach us about how to respond when a family member loses his or her way?” he asked.

Elder Nielson then shared a personal story about his sister, with her permission. He said, “In 1994 our sister, Susan, became disenchanted with the Church and some of its teachings. She was persuaded by those who mocked the early leaders of the Church. She allowed her faith in living prophets and apostles to diminish. Over time, her doubts overcame her faith, and she chose to leave the Church.”

Seeking heavenly guidance, Elder Nielson, his two brothers, and his widowed mother followed the example of the prodigal son’s father. “Susan had made her choice, and we had to figuratively let her go—but not without her knowing and feeling our sincere love for her,” he said.

Sharing examples of how they expressed their love, Elder Nielson said, “Every time my mother attended the temple, she placed Susan’s name on the prayer roll and never lost hope. My older brother and his wife, who lived closest to Susan in California, invited her to all family events. They prepared dinner in their home each year on Susan’s birthday. They made sure they were always in touch with her and that she knew of their genuine love for her.”

In 2009, Elder Nielson was to be sustained as a General Authority and, following the inspiration of his wife and daughter, called his sister and invited her to watch general conference. “To our delight, she felt impressed to watch all the sessions of conference,” he said. “The words of prophets and apostles and the love of her family moved her to turn and begin the walk back home.”

He then added, “When the lost one is your son or your daughter, your brother or your sister, and he or she has chosen to leave, we learned in our family that, after all we can do, we love that person with all of our hearts and we watch, we pray, and we wait for the Lord’s hand to be revealed.”