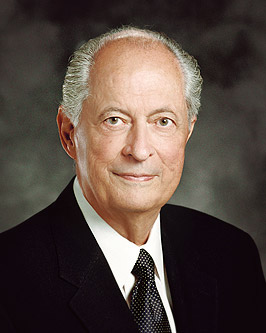 Elder Robert D. Hales of the Quorum of the Twelve Apostles began his Sunday afternoon conference address noting, “This is Easter Sunday, a day of gratitude and remembrance honoring our Savior Jesus Christ’s Atonement and Resurrection for all mankind. We worship Him, grateful for our freedom of religion, freedom of assembly, freedom of speech, and our God-given right of agency.”

He said that prophets foretold that in the latter days evil would be called good and good evil. “As those around us make choices about how to respond to our beliefs, we must not forget that moral agency is an essential part of God’s plan for all His children,” Elder Hales said during the Sunday afternoon session of general conference on April 5.

“As we walk the path of spiritual liberty in these last days, we must understand that the faithful use of our agency depends upon our having religious freedom,” he said. Satan doesn’t want any men to have this freedom, so as he did in the War in Heaven, he tries to confuse, undermine, and oppose it, he said.

“There are four cornerstones of religious freedom that we as Latter-day Saints must rely upon and protect,” Elder Hales said.

1. The freedom to believe. “No one should be criticized, persecuted, or attacked by individuals or governments for what he or she believes about God,” Elder Hales said.

2. The freedom to share beliefs and faith with others. The Lord commanded His disciples to “go ye into all the world, and preach the gospel to every creature” (Mark 16:15). Therefore, “we rely on religious freedom in order to teach the Lord’s doctrine in our families and throughout the world,” Elder Hales said.

3. The freedom to form a religious organization, which is declared in the eleventh article of faith: “We claim the privilege of worshiping Almighty God according to the dictates of our own conscience, and allow all men the same privilege, let them worship how, where, or what they may.”

4. The freedom to exercise faith not just in the home and chapel but also in public places. This freedom is currently under fire as those who demand their viewpoints to be heard are slow to allow the same tolerance for religious believers to do the same, he said.

In the Book of Mormon, Amlici, a cunning and wicked man, sought to deprive the people of their political and religious liberties and force them to bow to his secular standards. The people, who had been taught by King Mosiah, raised their voices for what they felt was right, Elder Hales said. “In these discussions, members of the Church and others had the opportunity to come together, experience the spirit of unity, and be influenced by the Holy Ghost,” he said. Amlici was not made king.

“As disciples of Christ we have a responsibility to work together with like-minded believers, to raise our voices for what is right,” Elder Hales said.

He gave three steps for members to practice to safeguard religious freedoms. “First, we can become informed.” Second, “join with others who share our commitment to religious freedom.” Third, “live your life to be a good example of what you believe—in word and deed.”