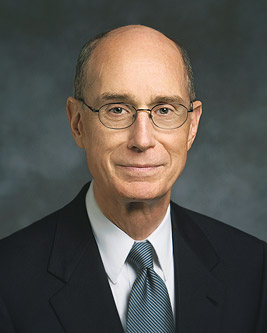 The right of priesthood holders to speak and act in the name of God “will only become a reality as you receive inspiration from God,” President Henry B. Eyring, first counselor in the First Presidency, said in his address at the priesthood session of general conference.

“You might have made the mistake of thinking, ‘Oh, that isn’t so difficult. I could get inspiration if I’m ever asked to give a talk, or if I ever need to give a priesthood blessing.’ Or, the young teacher or deacon might take comfort in the thought, ‘When I am older, or when I am called as a missionary, then I will know what God would say and what God would do.’

“Think of the day when you must know what God would say and what He would do. It has already come for us all—wherever you are in your calling in the priesthood.”

President Eyring turned to a personal reminiscence as an illustration.

Soon after his family moved to Utah, he went on an Aaronic Priesthood assignment to collect fast offerings. He knocked on a door with confidence but was met by a man who scowled and barked at him to go away.

“That was nearly 70 years ago, but I still remember the feeling I had that day on the doorstep that there was something I was supposed to have said or done,” he reflected. “If only I had prayed in faith as I went out that day, I might have been inspired to stay a moment longer on that doorstep, smile and say something like: ‘It’s good to meet you. Thank you for what you and your family have given in the past. I look forward to seeing you next month.’

Often the need to speak and act in the name of God comes where unaided judgment will not be enough without inspiration, President Eyring observed.

Such an occasion came to him many years ago in a hospital where he was asked to give a priesthood blessing. A father said doctors had told him his critically injured 3-year-old daughter would die within minutes.

“The words came to my mind and my lips that she would live,” he said. “The doctor standing by me snorted in disgust and asked me to get out of the way. I walked out of that hospital room with a feeling of peace and love. The little girl lived and walked down the aisle into a sacrament meeting on my last day in that city. I still remember the joy and satisfaction I felt from what I had said and done in the Lord’s service for that little girl and her family.”

The difference between the above two experiences came from what he had learned about the connection of prayer to priesthood power, President Eyring said. Weeks before the latter experience, he had followed a pattern of prayer that allowed God to give inspiration necessary to have power in the priesthood, he explained.

“It is not a matter so much of which words to use, but it will take some patience,” he said. “It is an approach to your Heavenly Father with the intent to be recognized by Him personally.”

While it is easy to get the proper feeling of reverence when kneeling or bowing one’s head, it is possible to feel one is approaching Heavenly Father in less formal and even in silent prayer, as is often necessary, he added.

For home teachers, human judgment and good intentions will not be enough for them to fulfill their duty, President Eyring said.

“So you will pray for a way to know their hearts, to know what things are amiss in the lives and hearts of the people you don’t know well. ... You will need to know what God would have you do to help them, and to do it all as nearly as you can, feeling of God’s love for them.”

President Eyring said that because the Spirit is so essential to fulfilling one’s priesthood duties, a priesthood holder is a personal target “for the enemy of all happiness. If he can tempt you to sin, he can lessen your power to be led by the Spirit and so reduce your power in the priesthood.”

Receiving guidance from the Holy Ghost as one studies the words of prophets “will take more than casual listening and reading,” he said. “You will need to pray and work in faith to put the words of truth down into your heart. You must pray that God will bless you with His Spirit, that He will lead you into all truth and show you the right way.”