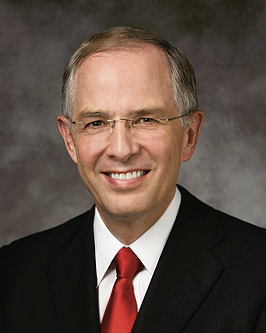 Seeing and believing the Lord’s miracles as He establishes His kingdom on earth can help Latter-day Saints see and believe that the Lord’s hand is at work in their own lives, said Elder Neil L. Andersen of the Quorum of the Twelve Apostles.

“We each try to do our part, but He is the grand architect,” he said. “Under the direction of His Father, He created this world. … As we are spiritually awake and alert, we see His hand across the world and we see His hand in our own personal lives.”

“We each try to do our part, but He is the grand architect,” he said. “Under the direction of His Father, He created this world. … As we are spiritually awake and alert, we see His hand across the world and we see His hand in our own personal lives.”

“We have taken His name upon us, and each week as we partake of the sacrament, we pledge that we will remember Him and keep His commandments. We are far from perfect, but we are not casual in our faith. We believe in Him. We worship Him. We follow Him. We deeply love Him. His cause is the greatest cause in all the world.”

“We rejoice in these days and pray that we will be able to courageously face our struggles and uncertainties. The difficulties of some are more severe than those of others, but no one is immune.”

Elder Andersen said although the Lord has reassured His children again and again that they need not fear, keeping a clear perspective and seeing beyond this world is not always easy.

Elder Andersen said he learned an important lesson about keeping an eternal point of view from President Thomas S. Monson.

“Eighteen years ago while traveling on a train in Switzerland with President Monson, I asked him about his heavy responsibilities. His response strengthened my faith. ‘In the First Presidency,’ he said, ‘we do everything we can to move this work forward. But this is the Lord’s work and He directs it. He is at the helm. We marvel as we watch Him open doors we cannot open and perform miracles we can scarcely imagine.’”

Elder Andersen said three beautiful examples of the Lord's hand in establishing His kingdom are the new temples announced in the Sunday morning session by President Monson. “Only a few decades ago, who could have imagined temples in Haiti, Thailand, and the Ivory Coast?”

Elder Andersen spoke of continued growth of the Church in Haiti after a devastating earthquake in 2010; the faithful example of Sathit Kaivalvatana, a faithful member in Thailand who overcame an accident in which he was paralyzed and who now serves as president of the Bangkok Thailand North Stake; and the growth of the Church in the Ivory Coast, where two couples started a Sunday School 30 years ago and there are now eight stakes and 27,000 members.

“As you keep the commandments and pray in faith to see the Lord’s hand in your life, I promise you that He will open your spiritual eyes even wider and you will see more clearly that you are not alone.”