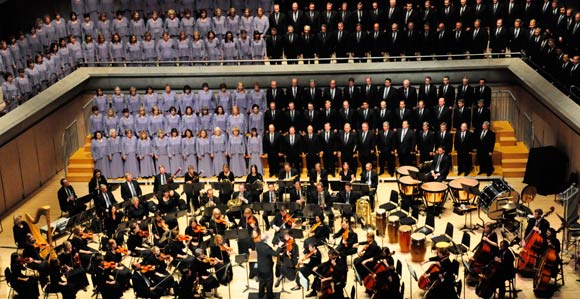 More than 5,200 people heard the choir and orchestra during two concerts at Roy Thomson Hall on Monday, June 27, 2011, at the close of their 2011 tour, which crossed three U.S. states and Canada.

“There is nothing like going on the road to connect with our audiences in the Midwest who know the pure joy music can bring to the hearts and minds of its listeners.” —Ron Jarrett, choir president

The Mormon Tabernacle Choir and Orchestra at Temple Square will visit six cities in America’s heartland next summer—their first visit to the upper Midwest since 2009. The tour will include stops in Columbus, Indianapolis, Chicago, Milwaukee, Madison, and Minneapolis from June 12 through June 20, 2013, and will feature the 360-voice world-renowned choir and 65 members of the Orchestra at Temple Square.

“The choir performs before a live audience every week for its Music and the Spoken Word broadcast,” said Ron Jarrett, president of the choir. “But there is nothing like going on the road to connect with our audiences in the Midwest who know the pure joy music can bring to the hearts and minds of its listeners.”

The choir’s repertoire will cover everything from Bach and Broadway to American folk hymns and spirituals. Tickets for the concerts are now available (see the schedule below), with the exception of the concert at the Ravinia Music Festival, where tickets go on sale (via Internet only) on November 12, 2012.

Since its first tour outside of Utah in 1893, the choir has toured extensively across the United States and abroad. It has performed throughout Europe and in music capitals from Israel and Russia to Japan and Australia. The all-volunteer choir and orchestra usually tour every other year since all of the performers must take vacation time from their jobs and leave their families to undertake the travel.