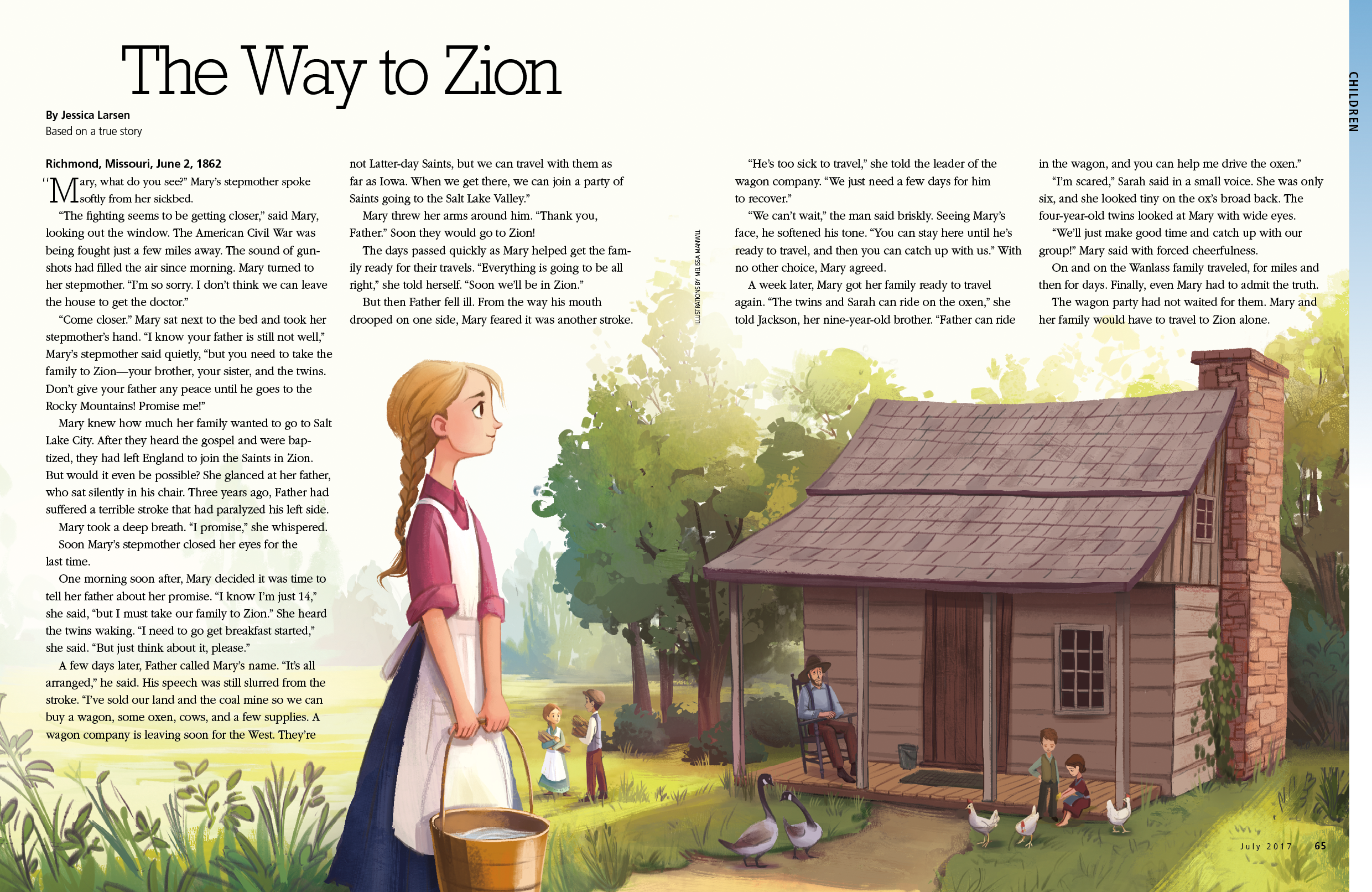 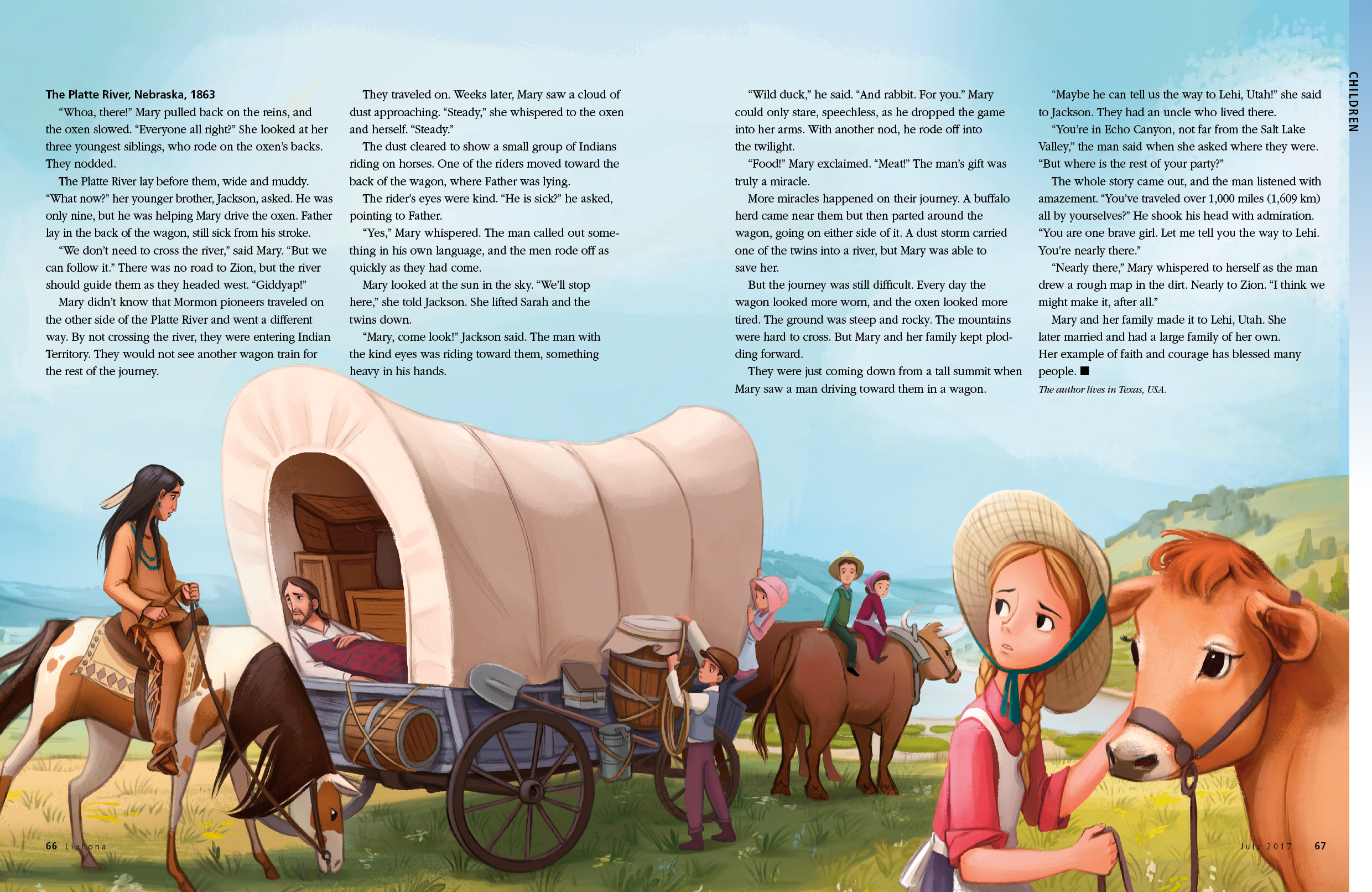 “Mary, what do you see?” Mary’s stepmother spoke softly from her sickbed.

“The fighting seems to be getting closer,” said Mary, looking out the window. The American Civil War was being fought just a few miles away. The sound of gunshots had filled the air since morning. Mary turned to her stepmother. “I’m so sorry. I don’t think we can leave the house to get the doctor.”

“Come closer.” Mary sat next to the bed and took her stepmother’s hand. “I know your father is still not well,” Mary’s stepmother said quietly, “but you need to take the family to Zion—your brother, your sister, and the twins. Don’t give your father any peace until he goes to the Rocky Mountains! Promise me!”

Mary knew how much her family wanted to go to Salt Lake City. After they heard the gospel and were baptized, they had left England to join the Saints in Zion. But would it even be possible? She glanced at her father, who sat silently in his chair. Three years ago, Father had suffered a terrible stroke that had paralyzed his left side.

Mary took a deep breath. “I promise,” she whispered.

Soon Mary’s stepmother closed her eyes for the last time.

One morning soon after, Mary decided it was time to tell her father about her promise. “I know I’m just 14,” she said, “but I must take our family to Zion.” She heard the twins waking. “I need to go get breakfast started,” she said. “But just think about it, please.”

A few days later, Father called Mary’s name. “It’s all arranged,” he said. His speech was still slurred from the stroke. “I’ve sold our land and the coal mine so we can buy a wagon, some oxen, cows, and a few supplies. A wagon company is leaving soon for the West. They’re not Latter-day Saints, but we can travel with them as far as Iowa. When we get there, we can join a party of Saints going to the Salt Lake Valley.”

Mary threw her arms around him. “Thank you, Father.” Soon they would go to Zion!

The days passed quickly as Mary helped get the family ready for their travels. “Everything is going to be all right,” she told herself. “Soon we’ll be in Zion.”

But then Father fell ill. From the way his mouth drooped on one side, Mary feared it was another stroke.

“He’s too sick to travel,” she told the leader of the wagon company. “We just need a few days for him to recover.”

“We can’t wait,” the man said briskly. Seeing Mary’s face, he softened his tone. “You can stay here until he’s ready to travel, and then you can catch up with us.” With no other choice, Mary agreed.

A week later, Mary got her family ready to travel again. “The twins and Sarah can ride on the oxen,” she told Jackson, her nine-year-old brother. “Father can ride in the wagon, and you can help me drive the oxen.”

“I’m scared,” Sarah said in a small voice. She was only six, and she looked tiny on the ox’s broad back. The four-year-old twins looked at Mary with wide eyes.

“We’ll just make good time and catch up with our group!” Mary said with forced cheerfulness.

On and on the Wanlass family traveled, for miles and then for days. Finally, even Mary had to admit the truth.

The wagon party had not waited for them. Mary and her family would have to travel to Zion alone.

“Whoa, there!” Mary pulled back on the reins, and the oxen slowed. “Everyone all right?” She looked at her three youngest siblings, who rode on the oxen’s backs. They nodded.

The Platte River lay before them, wide and muddy. “What now?” her younger brother, Jackson, asked. He was only nine, but he was helping Mary drive the oxen. Father lay in the back of the wagon, still sick from his stroke.

“We don’t need to cross the river,” said Mary. “But we can follow it.” There was no road to Zion, but the river should guide them as they headed west. “Giddyap!”

Mary didn’t know that Mormon pioneers traveled on the other side of the Platte River and went a different way. By not crossing the river, they were entering Indian Territory. They would not see another wagon train for the rest of the journey.

They traveled on. Weeks later, Mary saw a cloud of dust approaching. “Steady,” she whispered to the oxen and herself. “Steady.”

The dust cleared to show a small group of Indians riding on horses. One of the riders moved toward the back of the wagon, where Father was lying.

The rider’s eyes were kind. “He is sick?” he asked, pointing to Father.

“Yes,” Mary whispered. The man called out something in his own language, and the men rode off as quickly as they had come.

Mary looked at the sun in the sky. “We’ll stop here,” she told Jackson. She lifted Sarah and the twins down.

“Mary, come look!” Jackson said. The man with the kind eyes was riding toward them, something heavy in his hands.

“Wild duck,” he said. “And rabbit. For you.” Mary could only stare, speechless, as he dropped the game into her arms. With another nod, he rode off into the twilight.

More miracles happened on their journey. A buffalo herd came near them but then parted around the wagon, going on either side of it. A dust storm carried one of the twins into a river, but Mary was able to save her.

But the journey was still difficult. Every day the wagon looked more worn, and the oxen looked more tired. The ground was steep and rocky. The mountains were hard to cross. But Mary and her family kept plodding forward.

They were just coming down from a tall summit when Mary saw a man driving toward them in a wagon.

“Maybe he can tell us the way to Lehi, Utah!” she said to Jackson. They had an uncle who lived there.

“You’re in Echo Canyon, not far from the Salt Lake Valley,” the man said when she asked where they were. “But where is the rest of your party?”

The whole story came out, and the man listened with amazement. “You’ve traveled over 1,000 miles (1,609 km) all by yourselves?” He shook his head with admiration. “You are one brave girl. Let me tell you the way to Lehi. You’re nearly there.”

“Nearly there,” Mary whispered to herself as the man drew a rough map in the dirt. Nearly to Zion. “I think we might make it, after all.”

Mary and her family made it to Lehi, Utah. She later married and had a large family of her own. Her example of faith and courage has blessed many people.