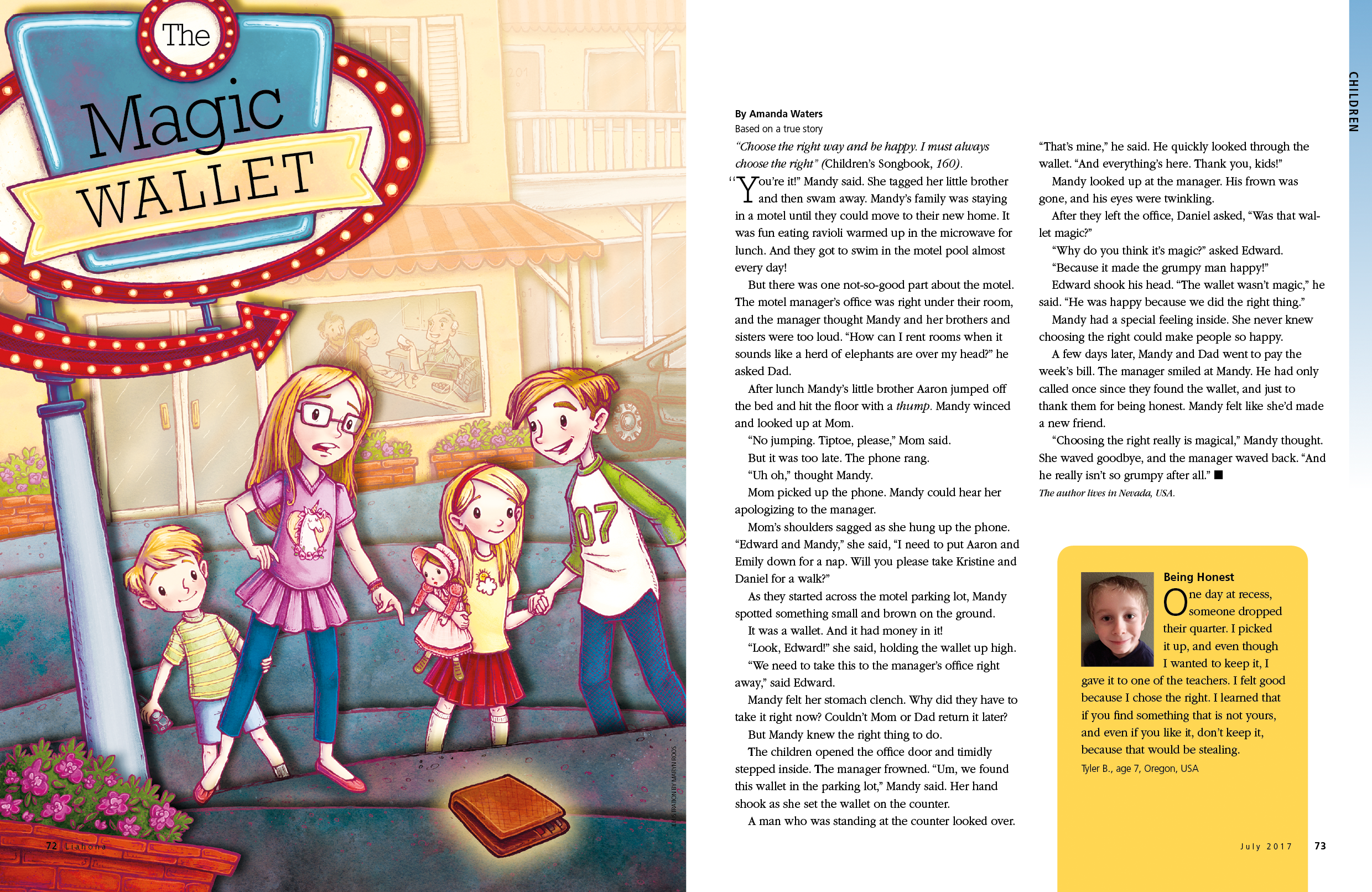 “You’re it!” Mandy said. She tagged her little brother and then swam away. Mandy’s family was staying in a motel until they could move to their new home. It was fun eating ravioli warmed up in the microwave for lunch. And they got to swim in the motel pool almost every day!

But there was one not-so-good part about the motel. The motel manager’s office was right under their room, and the manager thought Mandy and her brothers and sisters were too loud. “How can I rent rooms when it sounds like a herd of elephants are over my head?” he asked Dad.

After lunch Mandy’s little brother Aaron jumped off the bed and hit the floor with a thump. Mandy winced and looked up at Mom.

But it was too late. The phone rang.

Mom picked up the phone. Mandy could hear her apologizing to the manager.

Mom’s shoulders sagged as she hung up the phone. “Edward and Mandy,” she said, “I need to put Aaron and Emily down for a nap. Will you please take Kristine and Daniel for a walk?”

As they started across the motel parking lot, Mandy spotted something small and brown on the ground.

It was a wallet. And it had money in it!

“Look, Edward!” she said, holding the wallet up high.

“We need to take this to the manager’s office right away,” said Edward.

Mandy felt her stomach clench. Why did they have to take it right now? Couldn’t Mom or Dad return it later?

But Mandy knew the right thing to do.

The children opened the office door and timidly stepped inside. The manager frowned. “Um, we found this wallet in the parking lot,” Mandy said. Her hand shook as she set the wallet on the counter.

A man who was standing at the counter looked over. “That’s mine,” he said. He quickly looked through the wallet. “And everything’s here. Thank you, kids!”

Mandy looked up at the manager. His frown was gone, and his eyes were twinkling.

After they left the office, Daniel asked, “Was that wallet magic?”

“Why do you think it’s magic?” asked Edward.

“Because it made the grumpy man happy!”

Edward shook his head. “The wallet wasn’t magic,” he said. “He was happy because we did the right thing.”

Mandy had a special feeling inside. She never knew choosing the right could make people so happy.

A few days later, Mandy and Dad went to pay the week’s bill. The manager smiled at Mandy. He had only called once since they found the wallet, and just to thank them for being honest. Mandy felt like she’d made a new friend.

“Choosing the right really is magical,” Mandy thought. She waved goodbye, and the manager waved back. “And he really isn’t so grumpy after all.”

One day at recess, someone dropped their quarter. I picked it up, and even though I wanted to keep it, I gave it to one of the teachers. I felt good because I chose the right. I learned that if you find something that is not yours, and even if you like it, don’t keep it, because that would be stealing.