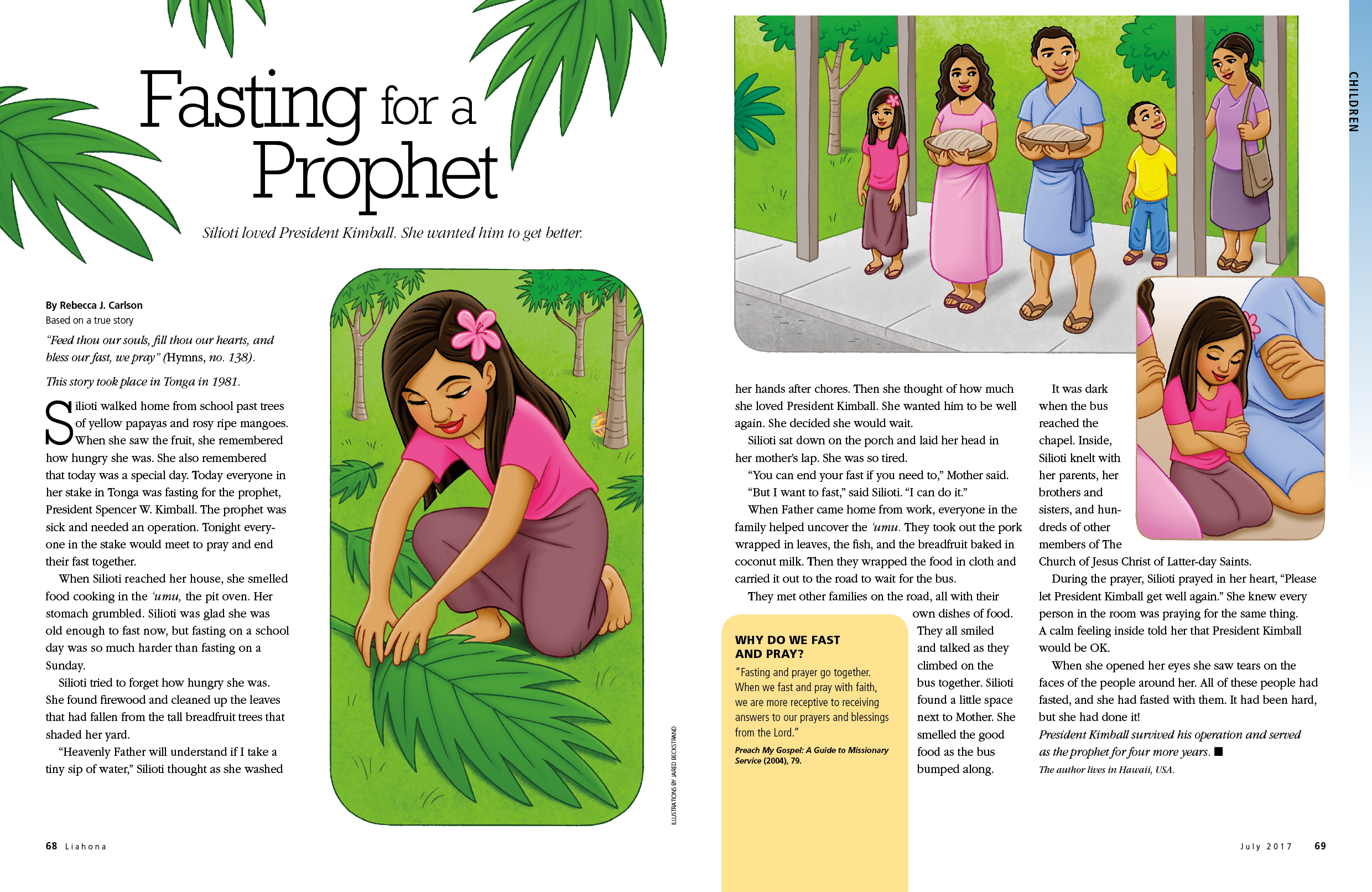 Silioti walked home from school past trees of yellow papayas and rosy ripe mangoes. When she saw the fruit, she remembered how hungry she was. She also remembered that today was a special day. Today everyone in her stake in Tonga was fasting for the prophet, President Spencer W. Kimball. The prophet was sick and needed an operation. Tonight everyone in the stake would meet to pray and end their fast together.

When Silioti reached her house, she smelled food cooking in the ‘umu, the pit oven. Her stomach grumbled. Silioti was glad she was old enough to fast now, but fasting on a school day was so much harder than fasting on a Sunday.

Silioti tried to forget how hungry she was. She found firewood and cleaned up the leaves that had fallen from the tall breadfruit trees that shaded her yard.

“Heavenly Father will understand if I take a tiny sip of water,” Silioti thought as she washed her hands after chores. Then she thought of how much she loved President Kimball. She wanted him to be well again. She decided she would wait.

Silioti sat down on the porch and laid her head in her mother’s lap. She was so tired.

“You can end your fast if you need to,” Mother said.

When Father came home from work, everyone in the family helped uncover the ‘umu. They took out the pork wrapped in leaves, the fish, and the breadfruit baked in coconut milk. Then they wrapped the food in cloth and carried it out to the road to wait for the bus.

They met other families on the road, all with their own dishes of food. They all smiled and talked as they climbed on the bus together. Silioti found a little space next to Mother. She smelled the good food as the bus bumped along.

It was dark when the bus reached the chapel. Inside, Silioti knelt with her parents, her brothers and sisters, and hundreds of other members of The Church of Jesus Christ of Latter-day Saints.

When she opened her eyes she saw tears on the faces of the people around her. All of these people had fasted, and she had fasted with them. It had been hard, but she had done it!

President Kimball survived his operation and served as the prophet for four more years.

“Fasting and prayer go together. When we fast and pray with faith, we are more receptive to receiving answers to our prayers and blessings from the Lord.”