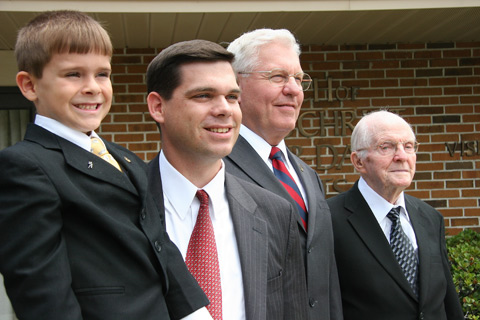 “A family needs a father to anchor it,” Elder L. Tom Perry of the Quorum of the Twelve Apostles said. The role of fathers, as taught in “The Family: A Proclamation to the World,” is to “preside over their families in love and righteousness” as equal partners with mothers.

Modern prophets and apostles have often expressed appreciation for their parents, and here are several examples of lessons they learned from their fathers.

“He Yielded His Time”

President Thomas S. Monson said: “As I reflect on my own father, I remember he yielded his minuscule discretionary time to caring for a crippled uncle, aged aunts, and his family. He served in the ward Sunday School presidency, always preferring to work with the children. He, like the Master, loved children. I never heard from his lips one word of criticism of another. He personified in his life the work ethic. I join you in an expression of gratitude for our fathers.”

“I Wasn’t There for the Weeds”

President Henry B. Eyring, First Counselor in the First Presidency, shared a story about his father, the scientist Henry Eyring, who served on the Utah Bonneville Stake high council. He was responsible for the welfare farm, which included a field of onions that needed to be weeded. At that time, he was nearly 80 and suffering from painful bone cancer. He assigned himself to do weeding even though the pain he felt was too great to allow him to kneel, so he pulled himself along on his stomach with his elbows. Yet he smiled, laughed, and talked happily with the others who were there that day.

President Eyring said of the incident:

"After all the work was finished and the onions were all weeded, someone [said to my father], 'Henry, good heavens! You didn't pull those weeds, did you? Those weeds were sprayed two days ago, and they were going to die anyway.'

"Dad just roared. He thought that was the funniest thing. He thought it was a great joke on himself. He had worked through the day in the wrong weeds. They had been sprayed and would have died anyway. …  I [asked] him, 'Dad, how could you make a joke out of that?' … He said something to me that I will never forget. … He said, 'Hal, I wasn't there for the weeds.'”

“We Would Do What the President Asked”

“We were miserable performers as children. We could do all kinds of things together while playing, but for one of us to try to sing a solo before the others was like asking ice cream to stay hard on the kitchen stove. In the beginning, we would laugh and make cute remarks about one another’s performance,” President Hinckley said. “But our parents persisted. We sang together. We prayed together. We listened quietly while Mother read Bible and Book of Mormon stories. Father told us stories out of his memory. …

“Out of those simple meetings in our home came something indescribable. Our love for our parents, brothers, and sisters was enhanced. Our love for the Lord increased. An appreciation for goodness grew in our hearts. I learned that wonderful things came about because our parents followed the counsel of the President of the Church.”

Elder David A. Bednar of the Quorum of the Twelve Apostles spoke of an important lesson about priesthood authority that he learned from his father, though his father was not at that time a member of the Church. Elder Bednar shared a conversation that occurred between him and his father after a Sunday meeting his father attended with him.

“My dad [said], ‘David, your church teaches that the priesthood was taken from the earth anciently and has been restored by heavenly messengers to the Prophet Joseph Smith, right?’ I replied that his statement was correct. Then he said, ‘Here is my question. Each week in priesthood meeting I listen to the bishop and the other priesthood leaders remind, beg, and plead with the men to do their home teaching and to perform their priesthood duties. If your church truly has the restored priesthood of God, why are so many of the men in your church no different about doing their religious duty than the men in my church?’ My young mind immediately went completely blank. I had no adequate answer for my dad.”

“I believe my father was wrong to judge the validity of our Church’s claim to divine authority by the shortcomings of the men with whom he associated in our ward. But embedded in his question to me was a correct assumption that men who bear God’s holy priesthood should be different from other men. Men who hold the priesthood are not inherently better than other men, but they should act differently. Men who hold the priesthood should not only receive priesthood authority but also become worthy and faithful conduits of God’s power. ‘Be ye clean that bear the vessels of the Lord’ (D&C 38:42).

“I have never forgotten the lessons about priesthood authority and power I learned from my father, a good man not of our faith, who expected more from men who claimed to bear God’s priesthood. That Sunday afternoon conversation with my dad many years ago produced in me a desire to be a ‘good boy.’ I did not want to be a poor example and a stumbling block to my father’s progress in learning about the restored gospel. I simply wanted to be a good boy. The Lord needs all of us as bearers of His authority to be honorable, virtuous, and good boys at all times and in all places.”

“We Prayed Together in the Grove”

While living in Long Island, New York, and shortly after receiving the Aaronic Priesthood, Elder Robert D. Hales of the Quorum of the Twelve Apostles was influenced by his father.

"When I was a twelve-year-old deacon, … [my father] took me to the Sacred Grove. … We prayed together in the grove and expressed our desire to be true and faithful to the priesthood which we held. Father later painted a picture of the place where we had prayed and gave it to me as a reminder of our promises made that day together. It hangs in my office today and serves as a reminder each day of my sacred experience and promises made with my earthly father as well as my Heavenly Father."

A father’s righteous example, Elder Hales said, has influenced him throughout this entire life.

Examples from the Scriptures

The scriptures offer many examples of the influence of righteous fathers. Here are three from the Book of Mormon. Can you think of others?

Enos, son of Jacob: “And the words which I had often heard my father speak concerning eternal life, and the joy of the saints, sunk deep into my heart” (Enos 1:3; emphasis added).

Nephi, son of Lehi, speaking of his wayward brothers, Laman and Lemuel: “And it came to pass that my father did speak unto them … with power, being filled with the Spirit. … Wherefore, they did as he commanded them” (1 Nephi 2:14).

Alma the Younger, son of Alma: “Behold, the Lord hath heard … the prayers of his servant, Alma, who is thy father; for he has prayed with much faith concerning thee that thou mightest be brought to the knowledge of the truth; therefore, for this purpose have I come to convince thee of the power and authority of God” (Mosiah 27:14).

For additional examples from the scriptures, see “A Latter-day Father’s Guidebook,” Ensign, February 1995.

Watch a video about fathers.

Listen to a Mormon Channel episode about fathers, featuring Elder Perry as a guest.

Read what “The Family: A Proclamation to the World” says about the role of fathers.

“An Attitude of Gratitude,” President Monson

“Waiting upon the Lord,” President Eyring

“How Will Our Children Remember Us?” Elder Hales

“The Powers of Heaven,” Elder Bednar

“Lessons I Learned as a Boy,” President Hinckley