Calling an Apostle of the Lord

During Jesus’s mortal ministry, He went into a mountain to pray. After a night of continual prayer, He called twelve disciples who would ensure the continuation of the Church He had established by giving it a “foundation of … apostles and prophets” (see Ephesians 2:19–20).

This foundation of living apostles and prophets—chosen and called through prophecy and revelation by priesthood authority, serving in love and unity under the direction of the resurrected Christ—continues today.

Who calls a new Apostle?

“All leaders in the Lord’s Church are called by proper authority,” President Russell M. Nelson taught. “No prophet or any other leader in this Church, for that matter, has ever called himself or herself. No prophet has ever been elected. The Lord made that clear when He said, ‘Ye have not chosen me, but I have chosen you, and ordained you’ (John 15:16). You and I do not ‘vote’ on Church leaders at any level. We do, though, have the privilege of sustaining them” (“Sustaining the Prophets,” Oct. 2014 general conference).

“What process he goes through exactly, I'm not sure. That’s, again, something private he pursues,” Elder Christofferson said. “He then brings back, when he’s reached his decision and had the inspiration he needs, the name or names to the council that we have of the First Presidency and the Quorum of the Twelve Apostles to sustain it. That goes forward to general conference” (in Tad Walch, “Elder Christofferson Talks about How President Monson Calls a New Apostle, Reflects on Elder Scott,” Deseret News, Sept. 24, 2015). 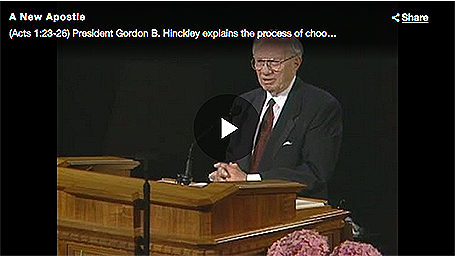 Who can be called as an Apostle?

“The new member of the Twelve may be called from one of the Quorums of the Seventy (which are made up of General Authorities who are senior leaders in the Church) or from general Church membership around the world” (MormonNewsroom.org).

What does an Apostle do?

The Lord called His Twelve Apostles to preach and “freely” bless others. 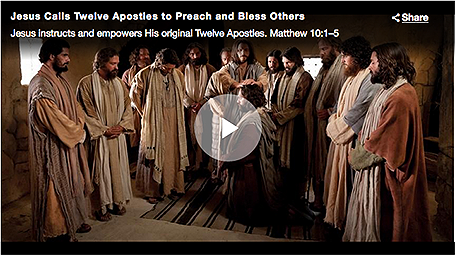 The Doctrine and Covenants teaches that Apostles serve as “special witnesses of the name of Christ in all the world” (D&C 107:23).

“Though mortal and subject to human imperfection,” President M. Russell Ballard, Acting President of the Quorum of the Twelve Apostles, said, “the Lord’s servants are inspired to help us avoid obstacles that are spiritually life threatening and to help us pass safely through mortality to our final, ultimate, heavenly destination” (“God Is at the Helm,” Oct. 2015 general conference).

The Prophet Joseph Smith established the importance of apostolic witnesses when he said, “The fundamental principles of our religion are the testimony of the Apostles and Prophets, concerning Jesus Christ, that He died, was buried, and rose again the third day, and ascended into heaven; and all other things which pertain to our religion are only appendages to it” (History of the Church, 3:30).

“The First Presidency and the Council of the Twelve Apostles, called and ordained to hold the keys of the priesthood, have the authority and responsibility to govern the Church, to administer its ordinances, to expound its doctrine, and to establish and maintain its practices,” taught President Hinckley (“God Is at the Helm,” Apr. 1994 general conference).

"The Lord directs His Church through living prophets and apostles,” said President Ballard. “This is the way He has always done His work. Indeed, the Savior taught, ‘Verily, verily, I say unto you, He that receiveth whomsoever I send receiveth me’ (John 13:20). We cannot separate Christ from His servants” (“God Is at the Helm,” Oct. 2015 general conference).

“The calling of 15 men to the holy apostleship provides great protection for us as members of the Church,” says President Nelson. “Why? Because decisions of these leaders must be unanimous. Can you imagine how the Spirit needs to move upon 15 men to bring about unanimity? These 15 men have varied educational and professional backgrounds, with differing opinions about many things. Trust me! These 15 men—prophets, seers, and revelators—know what the will of the Lord is when unanimity is reached! They are committed to see that the Lord’s will truly will be done. The Lord’s Prayer provides the pattern for each of these 15 men when they pray: ‘Thy will be done on earth as it is in heaven’” (“Sustaining the Prophets").

“The Lord always has and always will instruct and inspire His prophets," President Nelson said. “The Lord is at the helm. We who have been ordained to bear witness of His holy name throughout the world will continue to seek to know His will and follow it” (“A Message from the First Presidency,” Jan. 16, 2018).

How long does an Apostle serve?

Members of the First Presidency and Council of the Twelve Apostles serve for the remainder of their lives. As President Dallin H. Oaks of the First Presidency explained, “It is up front a calling to spend the rest of your life, full-time, in His service and to spend your life testifying of His plan and His authority and His Atonement and His Resurrection and to participate, as assigned, in the leadership of the Church” (“Elder Dallin H. Oaks,” ChurchofJesusChrist.org).

President Russell M. Nelson said: “Each day of an Apostle’s service is a day of learning and preparing for more responsibility in the future. It takes decades of service for an Apostle to move from the junior chair to the senior chair in the circle. During that time, he gains firsthand experience in each facet of the work of the Church. He also becomes well acquainted with the peoples of the earth, including their histories, cultures, and languages, as assignments take him repeatedly across the globe (“A Message from the First Presidency,” Jan. 16, 2018).

How can we sustain the Apostles?

President Henry B. Eyring of the First Presidency said we can sustain the Lord’s servants through our faith, prayers, service, and family and temple work. “We must examine our lives, repent as necessary, pledge to keep the Lord’s commandments, and follow His servants” (“The True and Living Church,” Apr. 2008 general conference).

Hear Elder David A. Bednar speak about the role of an Apostle today.

Learn more about how you can sustain our prophets and apostles.