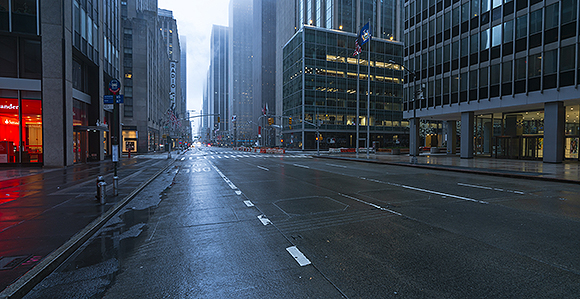 People and traffic have disappeared from Midtown Manhattan 6th Avenue for impact of COVID-19 in the rainy morning New York City, NY, on March 29, 2020. Photo by Toshi Sasaki, GettyImages.com.

“President Nelson has helped us understand ministering in a better way. Without this program, this moment would be really hard.” —President Robert Shull, Brooklyn New York Stake president

Even while dutifully caring for his congregants during a once-a-century pandemic, Woodside New York Stake President Jason Glass was reminded of a fact most local priesthood and Relief Society leaders know well:

“For 11 days, I was sick and in bed with respiratory issues, a high temperature, coughing, aches, and pains, and everything you read about that comes with the coronavirus.”

His wife, Kristina, and their daughter battled similar bouts. They’re all feeling quite a bit better, although Kristina Glass still can’t taste or smell anything.

While never officially diagnosed with COVID-19 because of local testing limitations, the Glass family is almost assuredly numbered among the tens of thousands of New York City residents to have been infected by the disease—including many Latter-day Saints.

Scores of members have been or are currently sick. A few have died. And many more have lost jobs or have been furloughed.

President Glass’s stake covers sections of Queens and Brooklyn. The Woodside members are reflective of the community’s vast diversity of people from Latin America, Eastern Europe, and parts of Asia.

The stake also includes several neighborhoods being hit hardest by the virus.

“We believe there are about 40 members who have had symptoms and suffered from COVID-19,” he said. “It’s very difficult to get tests in New York, so I strongly believe that the numbers that are being reported are much lower than what’s actually happening.”

One Woodside member—a man in his 60s—died last week.

“We’ve been hit hard,” added Brooklyn New York Stake President Robert Shull. “We’ve had four people who have passed away, have more than 50 people who have been diagnosed, and have probably another 100 or more people who have symptoms without being formally diagnosed.”

Meanwhile, the two Spanish-language units from the New York New York Stake, which stretches across the borough of Manhattan, have been severely impacted by the pandemic.

“We’ve had about 25 confirmed cases, and probably three times that number unconfirmed,” said President Colin Cropper. “Some are still sick, but many others have made it through.”

Two members of the New York New York Stake have died from coronavirus.

Meanwhile, the disease is exacting a heavy economic toll on many Latter-day Saints living in the United States’ largest city. Hit hardest are members working in restaurants or other service-industry jobs who can’t simply work from home.

“The job losses have been significant,” said President Glass. “I used to have bishop’s storehouse orders once a month, … but they have increased six times.”

President Shull from the Brooklyn stake offers a similar report.

“The economic impact is pretty dire. In one of our Spanish-language wards, about half the people have been laid off,” he said.

Fortunately, most of the city’s bishops and Relief Society leaders have stayed healthy—although a few elders quorum presidents from the Woodside stake have been ill.

“And we do have priesthood leaders in different units that have definitely been affected economically with job losses,” said President Glass.

But even during the darkest day of the pandemic in New York City, members have been uplifted and sustained through the care and shepherding of others. The recent general conference and worldwide fasts also provided spiritual uplift.

Some wards in the area have “congregated” for online worship—including special devotionals for missionaries who have recently returned home and were unable to deliver traditional reports in their respective wards or branches.

President Shull said the past few weeks have increased his gratitude for the prophetic leadership of President Russell M. Nelson and the ministering program the Church president implemented over a year ago.

Such well-established ministering practices have proven priceless during the citywide health crisis.

“President Nelson has helped us understand ministering in a better way,” he said. “Without this program, this moment would be really hard.”

In a period defined by social distancing and stay-at-home orders, loneliness is a sober byproduct of the disease. Ministering is proving an effective remedy.

“We’re just trying to maintain contact and make sure everybody’s OK and that they have somebody to talk to,” said President Shull.

The Manhattan New York Temple is, of course, closed during the virus outbreak. But President Cropper said he’s encouraging his stake members to remain “temple people” by keeping a current temple recommend and offering generous fast offerings “to meet the needs across our stake.”

Given their frontline experience, the New York City-area stake presidents are now seasoned resources for local priesthood and Relief Society leaders in other parts of the world who may be facing their own coronavirus challenges in the coming weeks and months.

“Over-communicate with your leaders as much as possible,” counseled President Glass. “Know that it could affect you and know that it’s real. … When it does hit, it hits hard.

“As an ecclesiastical leader, it’s just important to communicate and check in often.”