How Venezuelan Saints Deal with Change, Isolation, and Affliction 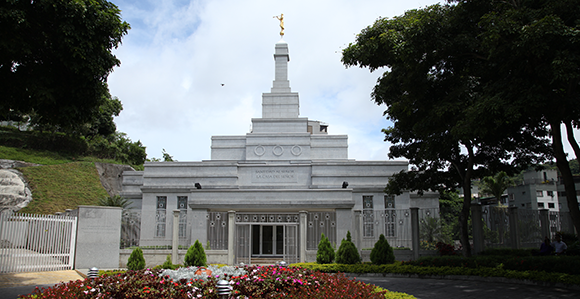 Listen to President Russell M. Nelson deliver a conference-like address via technology in the uncertain times of 2020? Support a nation’s ongoing missionary work by using only native missionaries?

To what Latter-day Saints face today because of the Church’s adjustments due to the COVID-19 pandemic, those in Venezuela can say, “Check and check—been there, done that.”

With the April 2020 general conference now a series of digital-only sessions, the prophet and other Church leaders spoke directly to a video camera for transmission, rather than in front of a Conference Center congregation.

Earlier this year, President Nelson and Elder D. Todd Christofferson of the Quorum of the Twelve Apostles did something similar for the February 2 Venezuela devotional, imparting words of comfort, encouragement, and eternal perspective to those in the struggling, strife-torn South American country.

Travel restrictions and security concerns prevented them from personally going and meeting with Latter-day Saints there. So President Nelson and Elder Christofferson prerecorded videotaped messages, which were transmitted to Venezuela, copied onto thumb drives, and delivered to each stake and district to be shown locally. Collectively, nearly 24,000 viewed the Sunday devotional in meetinghouses across the country.

Messages from that devotional ring true today as Saints worldwide participated in general conference while confronting restrictions and stay-at-home mandates due to the global coronavirus contagion.

“When we face challenges and afflictions, we may feel discouraged or perhaps forgotten,” President Nelson said. “I assure you that God has not forgotten you. . . . I testify that the Lord knows you. You are engraved upon the palms of the hands of the Son of God. He will not abandon you.”

Elder Christofferson added a second witness of the personal peace possible for the Venezuelan Saints, as both he and President Nelson delivered their remarks in Spanish.

“Although we cannot be present with you physically at this moment, we are grateful at least to be able to send you a message of hope and encouragement,” he said. “Our prayer is that the Holy Spirit, the Comforter, will inspire us and you and carry our words into the heart of each one.”

For years, Venezuela has been besieged with economic and social destabilization, safety and security concerns, travel bans, sanctions, and hyperinflation. The Church there has had to be self-reliant with local leadership and membership growth, with no missionaries assigned from outside.

Currently, worldwide, nonnative full-time missionaries are returning to their home countries as a precaution during the COVID-19 pandemic. In most cases, the Church’s ongoing adjustments to missionary work result in only native missionaries remaining in each country to carry on the work.

Meanwhile in Venezuela, missions composed solely of native missionaries have been the norm for years. It started in 2005, when, due to the adverse political climate, North American missionaries were removed from the country.

Elder Quentin L. Cook of the Quorum of the Twelve Apostles cited that experience when he visited Venezuela in August 2013—the first time in 14 years an Apostle could meet with members and conduct large-scale meetings in the country. No other senior Church leader has done the same since.

Elder Cook—the Missionary Department’s executive director in 2005—noted that because native Venezuelan missionaries made up only about 50 percent of the country’s missionary force then, the Church considered consolidating the four missions headquartered in Caracas, Maracaibo, Valencia, and Barcelona.

The Apostle recalled: “The leadership in Venezuela said, ‘We know that the Venezuelan missionaries left could only fill two normal-size missions, but please don’t do that. We will rise up, and we will call additional young people, and we will fill those missions.’”

Venezuela did rise up. That attitude prevailed again in 2014, when, because of ongoing political unrest, the Church withdrew from the nation 152 non-Venezuelan missionaries hailing from various Latin American countries and reassigned them to other missions throughout South America.

Today, Venezuela still claims four missions—staffed by Venezolanos—along with 167,000 members in 24 stakes and 231 congregations. And throughout the years of challenges and uncertainties, local Saints have enjoyed the blessings of the Caracas Venezuela Temple until it recently joined the Church’s other temples in a temporary closure due to coronavirus restrictions.

When the COVID-19 pandemic is over and conditions allow, general conferences once again will return to a more normal setting and missionaries will be assigned to missions other than their home country. In Venezuela, that time will be both post-pandemic and after a stabilization of political and economic upheaval. Until then, Venezuelan Latter-day Saints will continue to serve as examples of faith, perseverance, and growth during uncertain and unstable times.