“Shelter in Place” Spiritually and Physically, Elder Holland Says as Isolation Orders Continue around the World

Elder Jeffrey R. Holland speaks during a meeting at the Hyde Park Chapel of The Church of Jesus Christ of Latter-day Saints in London on Thursday, April 12, 2018. Photo by Ravell Call, Deseret News.

“Such times invite us to look into our soul and see if we like what we see there.” —Elder Jeffrey R. Holland

The continuing and growing COVID-19 pandemic is an opportunity for soul-searching and self-examination, the kind of personal reflection that refines faith, strengthens character, and “increases our humility before the Lord,” said Elder Jeffrey R. Holland.

“This is a rare time of enforced solitude when we don’t have a lot of trivia or superficial busyness distracting us from considering the truly important things in life,” said the member of the Quorum of the Twelve Apostles. “Such times invite us to look into our soul and see if we like what we see there.”

Elder Holland spoke to the Church News on March 28 as millions of Latter-day Saints worldwide respond to government mandates aimed to flatten the spread of the coronavirus that has caused illness and death, stifled economies, closed schools, and curtailed daily routines across the globe. In response to the pandemic, Church leaders have suspended meetings, closed temples, and transported thousands of missionaries to their home countries.

The result is a “kind of mandatory Sabbath—a time when we step away from our normal routine, from life as usual, and consider our dependence on God and the blessings from Him we so often take for granted,” said Elder Holland.

Quoting a favorite British phrase, he reassured the Church News audience that “things are going to ‘come right.’ They are undoubtedly on their way to ‘coming right’ already. But we owe it to our Father in Heaven to be a little more grateful, a little more thankful, and a little more inclined to remember how many problems are resolved because of God, angels, covenantal promises, and prayer.”

“The opportunity to respond to trouble and turmoil with ever-greater faith is documented over and over again in scripture—where the love of God, the sacrifice of Christ, and their many manifestations of mercy are the great constants when we face adversity of one kind or another,” said Elder Holland.

This present pandemic presents a “precious opportunity to demonstrate faith,” he said. “Often those opportunities seem rare. In our modern age we don’t have to worry about parting the Red Sea, because we have engineers that can build a bridge over it. We need some reminders from time to time that those beautifully engineered bridges can collapse, so to speak. This pandemic is just such a collapse.”

As millions across the world face “shelter-in-place” orders, Elder Holland noted that the term has both spiritual and physical implications. He said the verses in Psalm 61:1–4 summarize the opportunity Latter-day Saints have to look to the Lord for shelter:

“Hear my cry, O God; attend unto my prayer.

“From the end of the earth will I cry unto thee, when my heart is overwhelmed: lead me to the rock that is higher than I.

“For thou hast been a shelter for me, and a strong tower from the enemy.

“I will abide in thy tabernacle for ever: I will trust in the covert of thy wings.”

That is “shelter at its best,” Elder Holland said, noting that society should also be obedient to the governmental directives regarding temporal sheltering as well.

“The Lord is our ultimate shelter,” he explained. “He is our tower. He lifts us out of troubled waters and places us on the rock of our Redeemer. He covers us with His wings, poetically speaking.”

Pausing to reflect on this verse of scripture, Elder Holland said quietly, “We are always talking about not having enough time to think about such things,” said Elder Holland. “Well, we have some time now.”

With that time, members can be “immersed in things of the soul that we always want to address, and know very well that we should, but sometimes in the hubbub of daily life don’t seize the opportunity to do.”

Lamenting the pace of our modern era, Elder Holland recalled, “Ralph Waldo Emerson said once, ‘Things are in the saddle and ride mankind.’”

“Let’s realize this is one of the times we can take the saddle off our backs, a time when not quite so many demands are made and we can address edifying, eternally important things.” 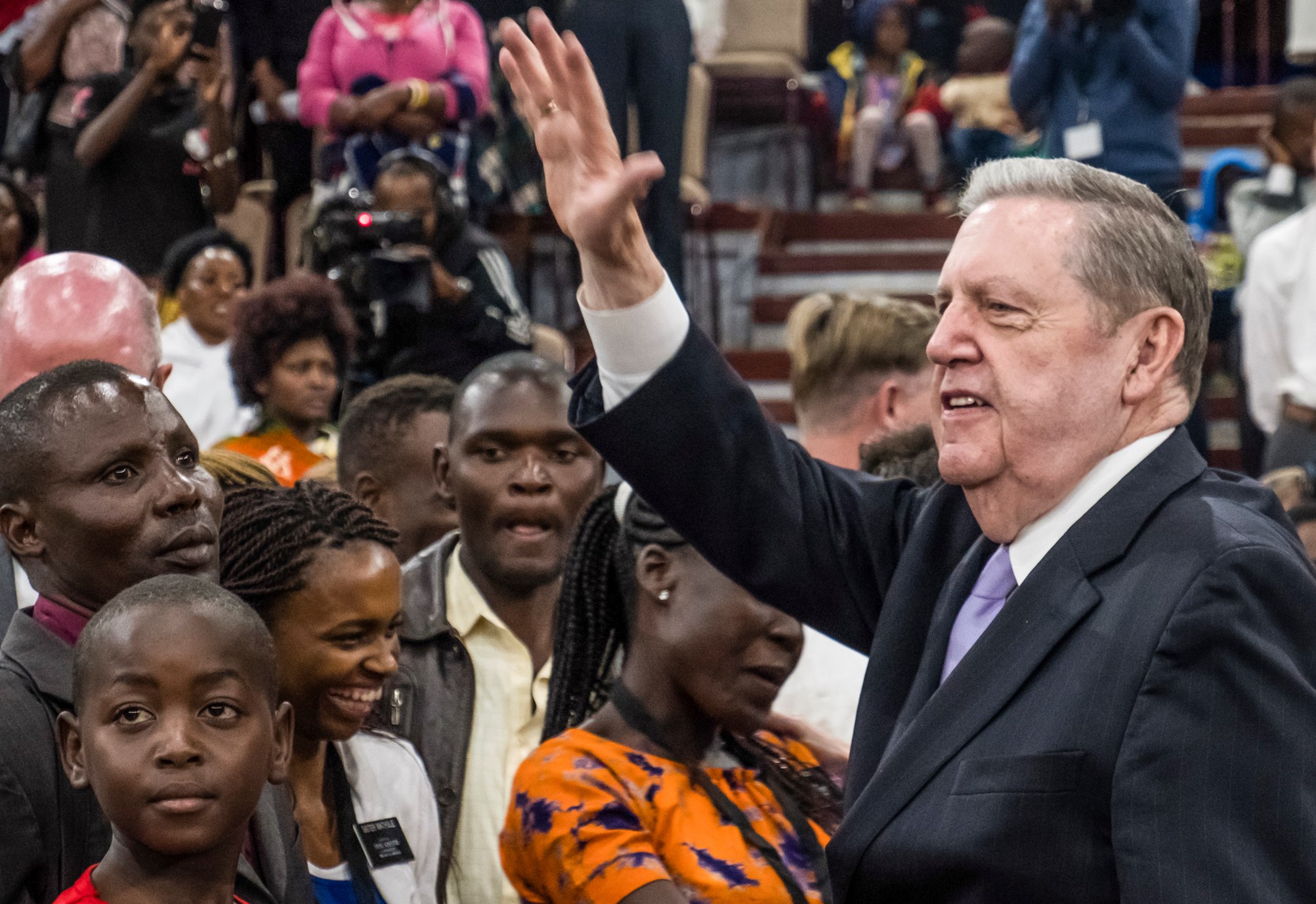 Elder Jeffrey R. Holland of the Quorum of the Twelve Apostles greets members in Harare, Zimbabwe, on April 17, 2018, as part of the global ministry tour.

“Things of the Heart”

One of those things is looking to the needs of others, said Elder Holland. Members can find joy as they share the “things of the heart”—provide, care for, and reach out to another in ways that are consistent with the physical distance we are supposed to maintain. “It is a tremendously joyful thing to lift somebody else spiritually.”

Through ministering, the Lord makes sure every individual is cared for. At a time when physical contact is limited, members can rely on technology such as social media, email, Skype, and FaceTime, he said. “We ought to dedicate a certain part of our day to communicating with people who need a boost. Of course, we get a boost from doing that, so everyone is ‘lifted up,’ as the Savior said He was sent to earth to do.” 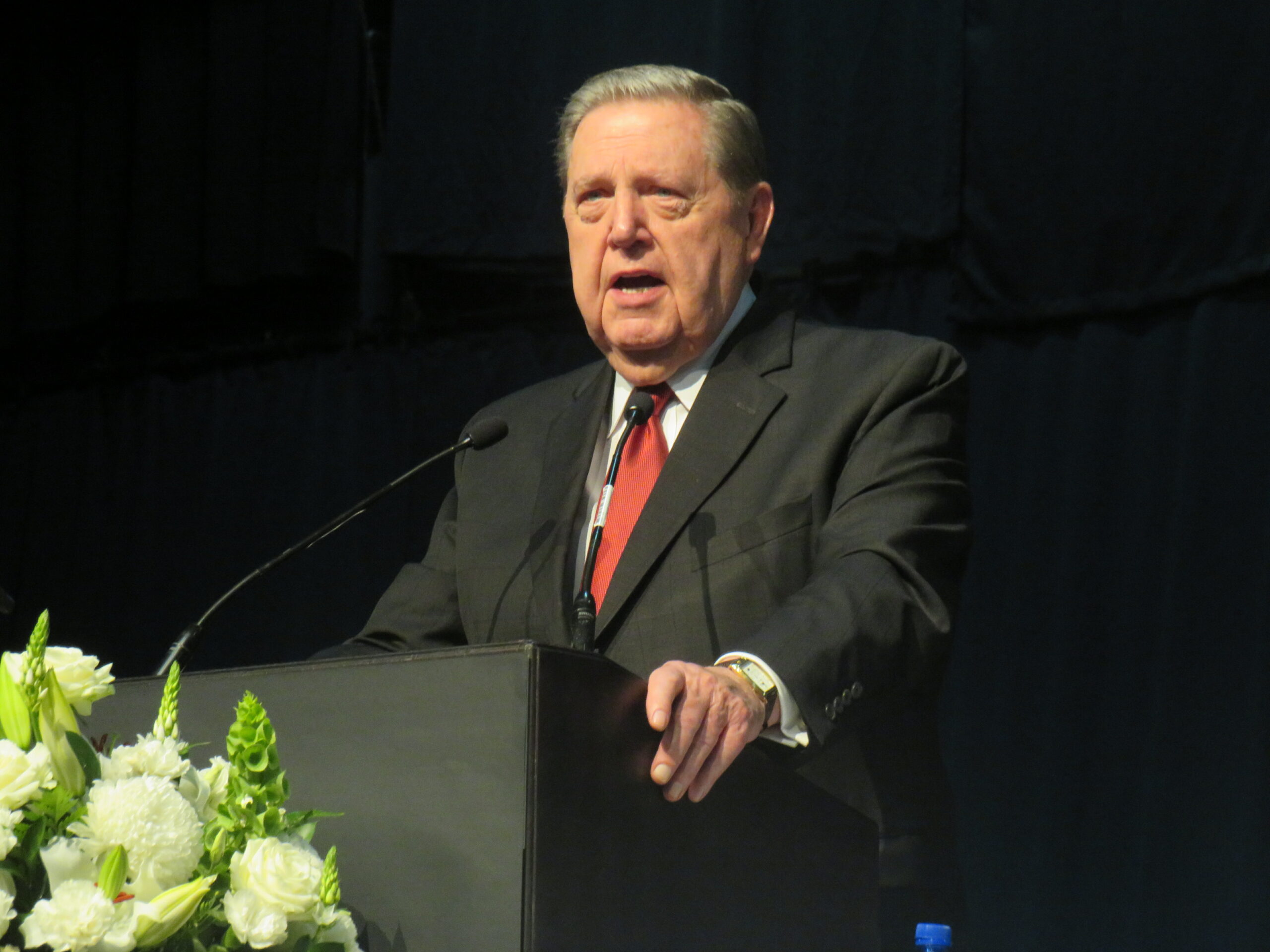 Elder Jeffrey R. Holland of the Quorum of the Twelve Apostles speaks during a multistake conference at the Gallagher Convention Center, near Johannesburg, South Africa, on Sunday, November 10, 2019.

Elder Holland said he is trying to take advantage of his reduced travel schedule by sending notes or making phone calls, “doing the unexpected—but much-appreciated and sometimes truly needed—thing to brighten someone’s day,” he said.

There “is no particular merit in wringing our hands about the visit we cannot make or the face-to-face presence we cannot create,” he warned. “Let’s do the best we can.”

Latter-day Saints should lead the way in being “positive and optimistic, doing the things they can do and trusting the Lord for the rest.” 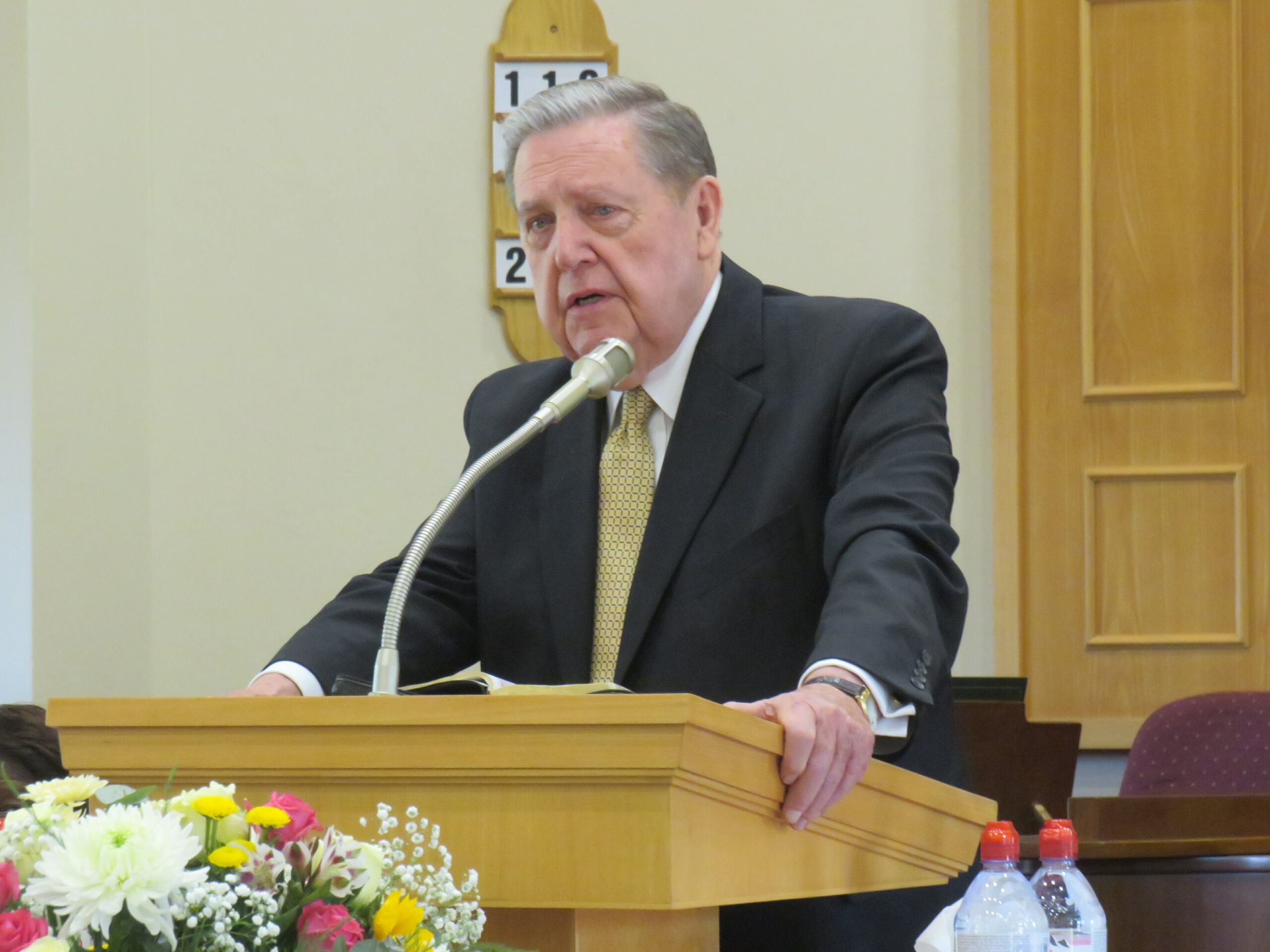 As the Prophet Joseph Smith said in Liberty Jail, “Let us cheerfully do all things that lie in our power; and then may we stand still, with the utmost assurance, to see the salvation of God, and for his arm to be revealed” (Doctrine and Covenants 123:17).

Elder Holland said this time of not being able to be with the Saints across the globe and with his Brethren “is a tremendous loss” for him personally.

“I am an Irish backslapper,” he said. “I really do love people. So I do miss being with the members.” 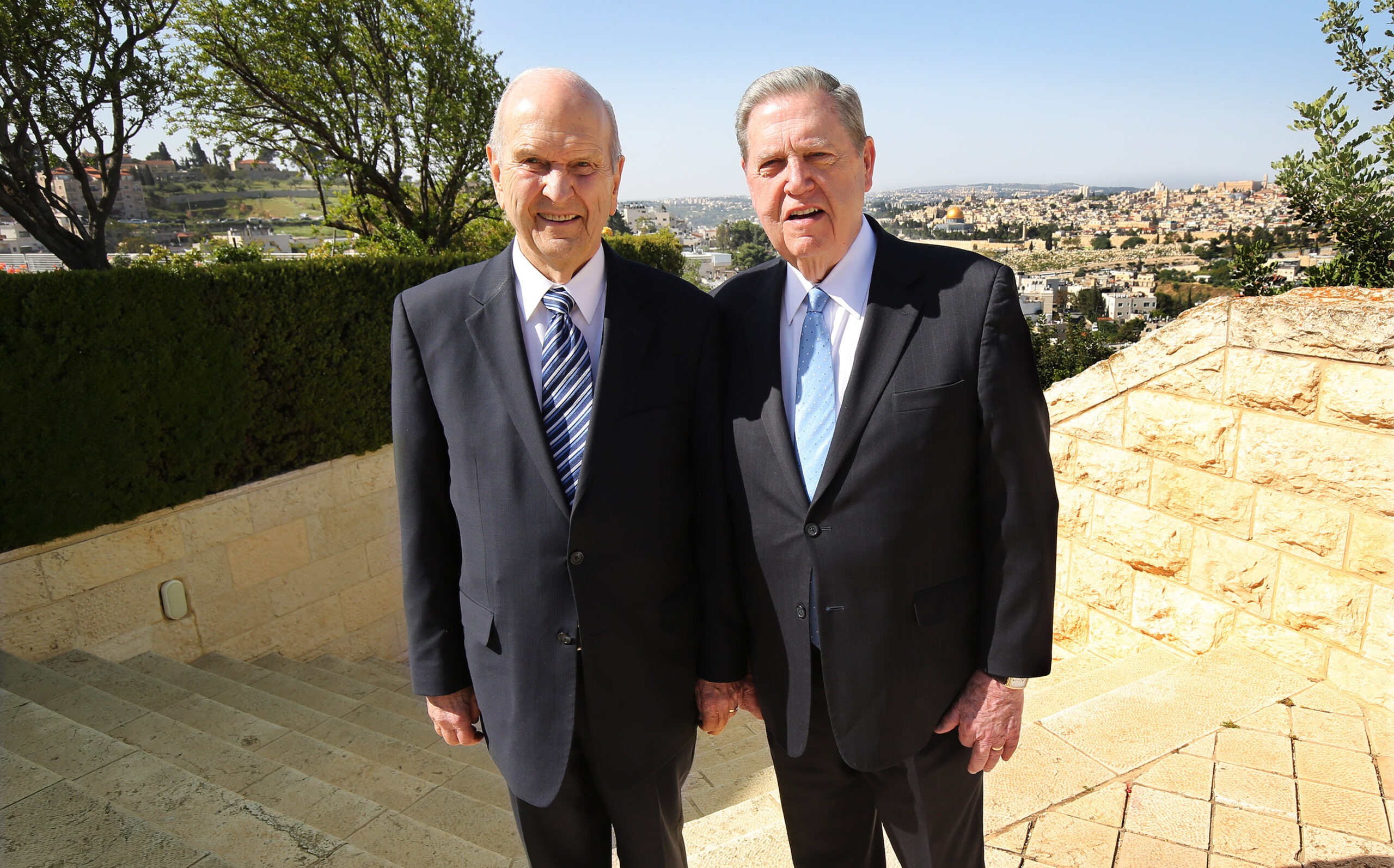 President Russell M. Nelson of The Church of Jesus Christ of Latter-day Saints, left, and Elder Jeffrey R. Holland of the Quorum of the Twelve Apostles stand together at the BYU Jerusalem Center in Jerusalem on Saturday, April 14, 2018. Photo by Jeffrey D. Allred, Deseret News.

The other side of the coin, he added, “is how rewarding it has been for me to have a little more quiet time” to “do a little more searching of my own soul rather than somebody else’s.”

When we are engaged in society, a person’s mind is often consumed with matters of current affairs and chatty conversation, he said.

“But when we’re alone, those are times of character assessment. That’s when you think about who you really are and what really matters.” It is “a sobering exercise to be quiet, to be alone with yourself. The obvious question then is, Do you like the company you are keeping when you are the only one in the room?” 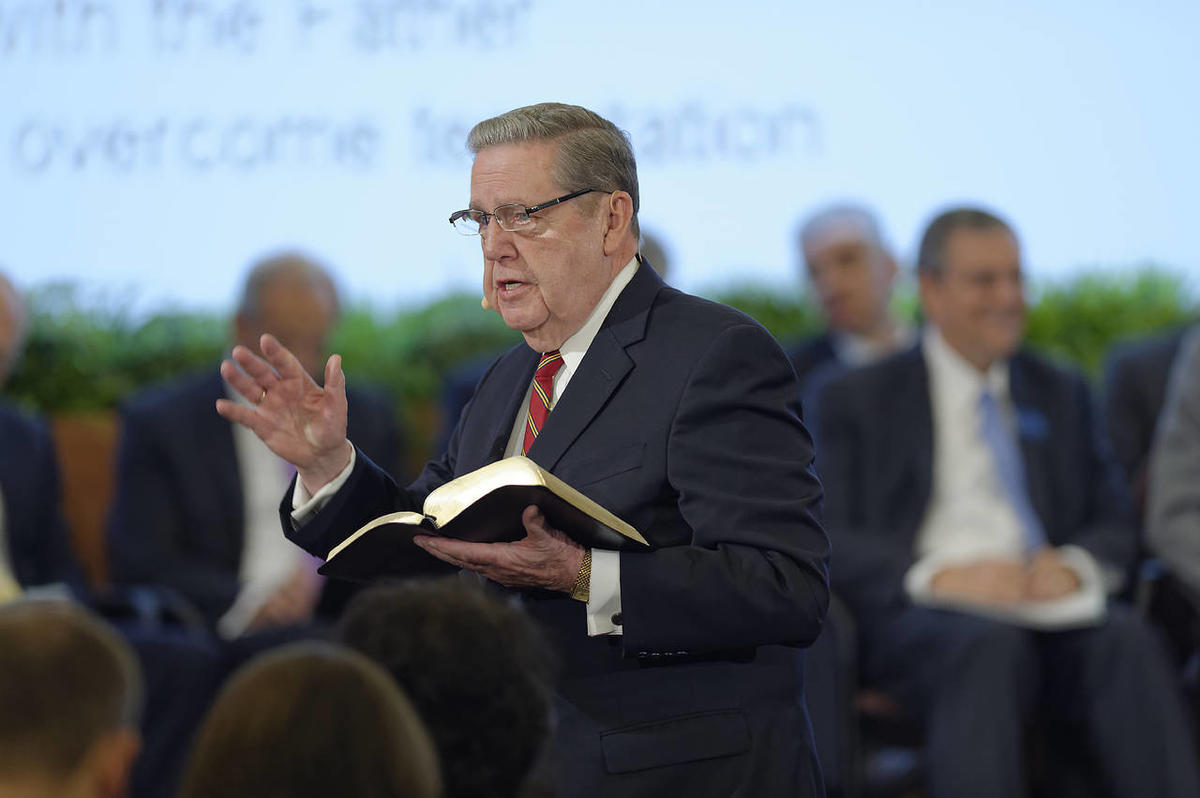 Elder Jeffrey R. Holland of the Quorum of the Twelve teaches from the scriptures during a large group interactive session of the 2015 Seminar for New Mission Presidents. Photo courtesy of the Deseret News.

“A Lot to Be Encouraged About”

Elder Holland said Latter-day Saints can learn much from looking back to past turmoil. One such time in the Church was “much more wrenching than anything we are facing now.”

Latter-day Saints in both Kirtland, Ohio, and Jackson County, Missouri, were suffering great persecution. Apostasy was beginning in the former location and mobs had driven the Saints from their homes in the latter. In both places, the members had lost homes, farms, livestock, and personal possessions.

In that wretched circumstance, the Lord sent a message to them in a revelation given to Joseph Smith in Kirtland on December 16–17, 1833:

“Therefore, let your hearts be comforted concerning Zion; for all flesh is in mine hands; be still and know that I am God.

“Songs of everlasting joy” in the middle of such tribulation? “Yes! And why not? There is a lot to be joyful about as we refine our faith, trust more in the Lord, and see the miracle of His deliverance,” said Elder Holland. 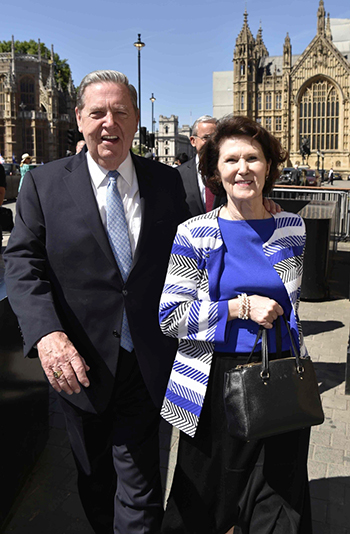 Elder Jeffrey R. Holland of the Quorum of the Twelve Apostles and Sister Patricia Holland arrive at Parliament, London, England, on July 2.

There are repeated declarations in the scriptures where we have the Lord’s promises He “will be with us in all of our circumstances—good, bad, and otherwise.” For example, Alma said, “I have been supported under trials . . . of every kind, yea, and in all manner of afflictions . . . I do put my trust in him, and he will still deliver me” (Alma 36:27).

That reassurance can be a source of hope and encouragement, said Elder Holland. “Whatever else happens, we will never be separated from the Savior’s love and His companionship, even if we don’t recognize it at the time.”

“The Spirit is not blocked by a virus or by national boundaries or by medical forecasts.” There are “gifts from heaven that are not limited by trouble in the land or illness in the air. . . .

“He who created this marvelous world in which we live can say to any of the elements in it, ‘This far and no farther.’ That is what He will say to this blight we are facing. In the presence of His majesty, even subatomic-sized creations must bend—if only figuratively—and each in its own way ‘confess’ that Jesus is the Christ, the Son of God, the great Redeemer of all. Under the direction of His Father, the Savior is in charge of the destiny of this world. We are in very sure and loving hands.” 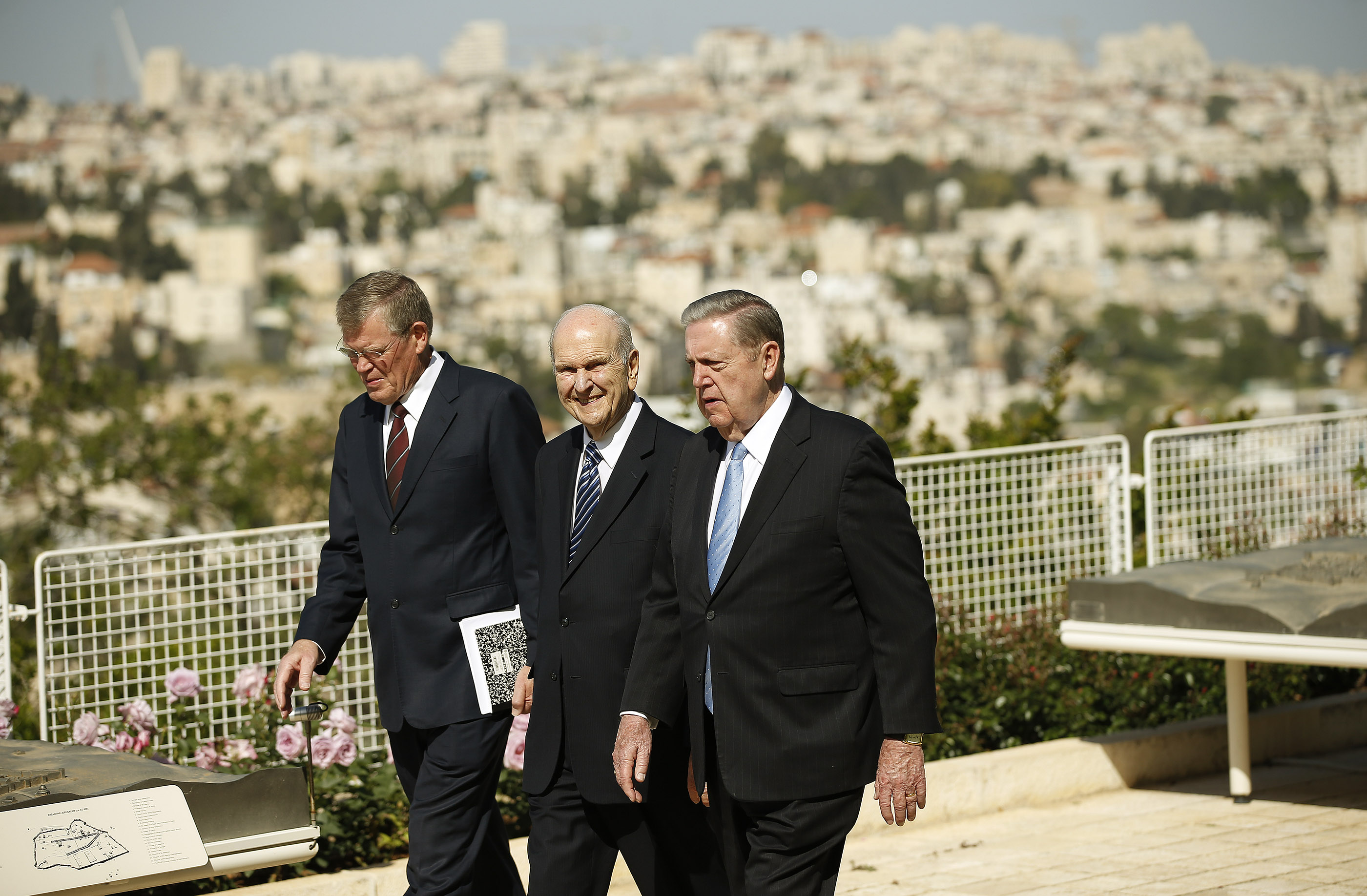 Elder Jeffrey R. Holland of the Quorum of the Twelve Apostles speaks during an event for young adults at the Stanford Memorial Church on the Stanford University campus in Stanford, California, on Sunday, February 9, 2020. Photo by Ramin Rahimian for the Deseret News.