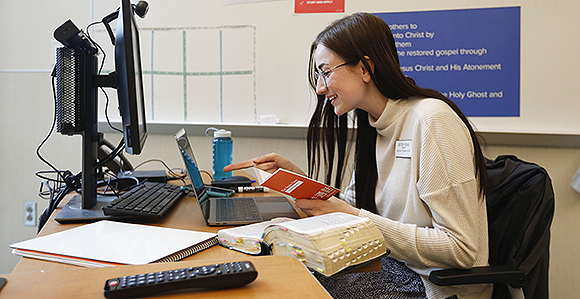 In an attempt to control the spread of COVID-19, missionaries are being trained by remote video conference rather than travel to the The Church of Jesus Christ of Latter-day Saints’ 10 missionary training centers. Photo by Laura Seitz, Deseret News.

“The work goes on irrespective of whether there is an epidemic or smooth sailing.” —Elder Dieter F. Uchtdorf

As the COVID-19 pandemic accelerated across the world, leaders of The Church of Jesus Christ of Latter-day Saints turned their attention to the health and safety of 67,000 full-time missionaries and those they teach and serve.

The First Presidency and the Quorum of the Twelve Apostles—with information directly from and in close coordination with area presidencies and local leaders, the missionary department, and an army of volunteers—counseled and prayed for solutions.

“When we decided about moving missionaries from or to certain countries in the morning, we had to change it in the afternoon,” said Elder Dieter F. Uchtdorf of the Quorum of the Twelve Apostles and chairman of the Church’s Missionary Executive Council. “When we evaluated governmental or other travel restrictions in a meeting, the situation had already changed when we left the meeting.”

With information and circumstances in constant flux, Church leaders and “especially the missionary department staff and our precious volunteers” had to adapt quickly, he said.

The prospect of returning thousands of missionaries to their home countries caused great heartache, explained Elder Uchtdorf. All involved learned quickly that is was not enough to ponder only with their heads, but also with their hearts, and the Lord expanded their vision of the great opportunities and possibilities for missionary work to go forward under these stressful circumstances.

“We have to accept there is a lesson in all of this,” said Elder Uchtdorf.

Facing increasing health risks and nations about to close their borders, wherever necessary Church leaders began returning missionaries to their home nations; some 30,000 missionaries were on the move at one specific time. Others had traveled before them and more would follow.

It was “almost heartbreaking,” said Elder Uchtdorf, “because you see that these missionaries wanted to stay and you feel that they are needed there.”

For months the Church had been tracking the progression of COVID-19. Leaders realized immediately that the illness would have “a worldwide effect on missionary work as we knew it,” said Elder Uchtdorf.

This is occurring in countries and missions where this is the safest and best way to serve or where travel restrictions do not allow a return. But most missionaries who had to return to their country of origin have now returned. They are either continuing their service in their home country, have been released or are awaiting reassignment.

“COVID-19 accelerated our thinking about this tremendously and opened our eyes for new ways,” including the use of technology, said Elder Uchtdorf. “The Spirit can work wonderfully as we use new and unfamiliar ways of communicating with each other.”

Elder Uchtdorf said all missionaries, regardless of their circumstances, “have the wonderful opportunity of going forward by finding, teaching, baptizing, and making disciples” with the aid of technology and social media. “The work goes on irrespective of whether there is an epidemic or smooth sailing.”

The gospel “is a message of peace and hope; it is a message of healing and joy. Using technology to share this message with the help of the Spirit is the opportunity of our time.” The transition from sharing the gospel by technology, to eye-to-eye personal contact is an important step in this process and will be much easier when the pandemic is better under control. But missionary work will continue to move forward—in spite of the pandemic. “It is the fulfillment of the great commission given to us by the Savior based on the two great commandments showing our love for God and His children by ministering to all.”

Missionary recommendations continue to arrive at headquarters. Calls continue to be extended and assignments made, said Elder Uchtdorf.

“We had to learn and find our way because we wanted to keep the missionaries safe and happy and also keep their families happy,” he said. “Of course, that is not always easy to do at the same time.”

Similar to experiences of Samuel Smith—Joseph Smith’s brother and the Church’s first missionary who endured many hardships—this is a time of great learning for missionaries, their families and those who oversee missionary work, said Elder Uchtdorf. Samuel Smith “was frustrated almost from the first day until the last day.” In spite of wonderful successes (he gave away a copy of the Book of Mormon that led to the baptism of both Brigham Young and Heber C. Kimball), his mission was one of constant frustration. “Now we recognize him as one of the hero missionaries.”

Elder Uchtdorf mentioned that even President Gordon B. Hinckley—when he was a struggling young missionary in England—had to learn from his father the need to “forget yourself and go to work.”

“This was true then; it is true now,” Elder Uchtdorf said.

The First Presidency and the Quorum of the Twelve Apostles pray for and care deeply about the Church’s full-time missionaries, said Elder Uchtdorf. Decisions that impact this group are made only after senior leaders have sought out and received inspiration and guidance.

Speaking to the missionaries whose missions were cut short, Elder Uchtdorf emphasized two key points in missionary service—the decision to serve a mission and the acceptance of the missionary call extended by the prophet of God.

“Many of our missionaries have prepared themselves from childhood on to serve a mission. They decided on their own free will, they wanted to go. And then they accepted the call from the Prophet of God to serve as a disciple of Jesus Christ, as a representative of the Savior, wherever the Lord would assign them for however long.” 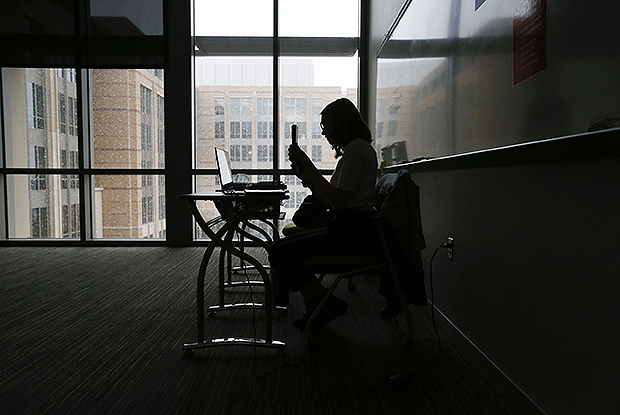 Kimber Young teaches Mandarin Chinese via video conferencing at the Provo Missionary Training Center to training missionaries in their homes on Wednesday, March 25, 2020. In an attempt to control the spread of COVID-19, missionaries are being trained by remote video conference rather than travel to the The Church of Jesus Christ of Latter-day Saints' 10 missionary training centers. Photo by Laura Seitz, Deseret News.

There have been other times in history when missionaries have had unexpected releases—due to health concerns, accidents, war or other circumstances, Elder Uchtdorf added. “The key points are the decision to go and the decision to accept.” 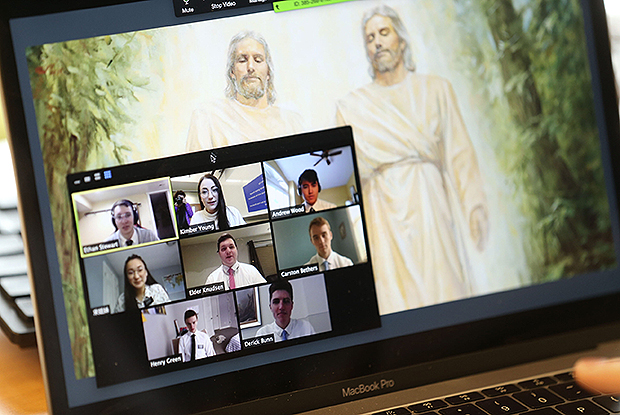 Addie Rutter uses a laptop at the Provo Missionary Training Center to teach French to training missionaries at home on Wednesday, March 25, 2020. In an attempt to control the spread of COVID-19, missionaries are being trained by remote video conference rather than travel to the The Church of Jesus Christ of Latter-day Saints' 10 missionary training centers. Photo by Laura Seitz, Deseret News.

The Lord, he promised, accepts the sacrifices and service of every missionary who served with all their heart, might, and strength even if they had to be released earlier than anticipated. “Be the best missionary you can be now and make the best out of the time in front of you,” he said. “And remember, you will be a missionary for the rest of your life.”

Elder Uchtdorf said there are many things missionary parents can also learn in this process. “Sometimes you have to let your sons or daughters go and let them find their way … . Give them courage and trust that they are sons and daughters of Heavenly Father and will do the right things.”

He continued, “In your phone calls, emails, or letters, strengthen the faith of your missionaries. Help them to focus on the things they can influence and not be distracted or discouraged by things they cannot change. Ask for and listen to their spiritual experiences during these challenging times. Share your own testimonies of how your lives are blessed because of their service as missionaries.”

All missionaries need that kind of support, he said. “It will greatly help the missionary to grow in spirituality and become more mature, but also help families feel part of this marvelous work and a wonder.”

Mission presidents and their wives are always a wonderful source of strength and direction to the missionaries but especially during this special time, said Elder Uchtdorf. “It is amazing how creative mission leaders are in strengthening and motivating the missionaries even though they are not able to see them in person so often. It is just amazing.” 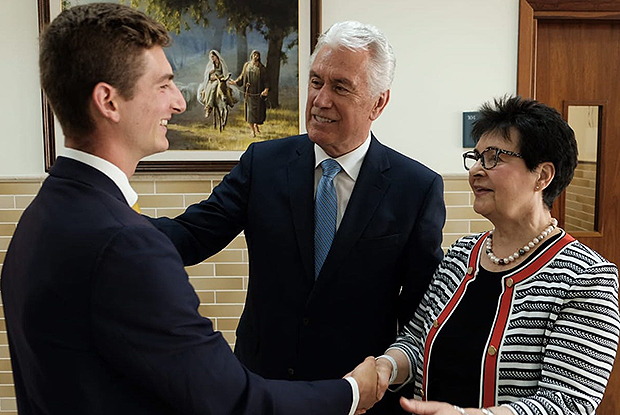 Elder Uchtdorf said the answer to the challenges ahead is the gospel of Jesus Christ. Because of that, missionary work for the Church has a bright future.

Members of the Church of Jesus Christ—as do all in the human race—will continue to face challenging times, said Elder Uchtdorf. They will be different for every person, in every location, and in every circumstance.

Still, as Latter-day Saints “we are living in a time when we need to learn” and find new approaches for sharing and proclaiming the gospel in more creative and productive ways, he added.

Members are connecting “at this moment” through technology. Missionaries are doing the same. “We have to use our creativity, our hearts, our minds, our experiences, our great potential of counseling together.”

The Church and its members will still share God’s truths with His children, he emphasized. Just as the Apostle Paul traveled by boat, and missionaries centuries later took planes, missionaries of tomorrow may connect with others through many different and often very new means.

“We are continuing to learn how to improve missionary work now and for the future,” said Elder Uchtdorf. “The Lord has promised to ‘hasten His work’ for the blessing of all of God’s children. I feel that we are right in the middle of this process while living through this challenging time. Our precious missionaries are the pioneers of our day, blazing a trail of sharing the gospel message in new ways fitting to our circumstances, so that the Church of Jesus Christ will continue to roll forth until it fills the whole earth.” 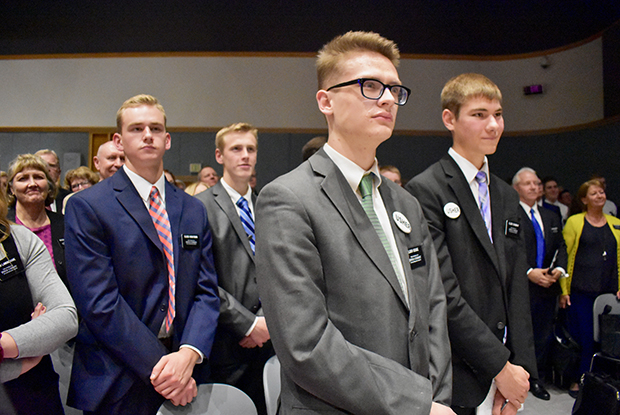 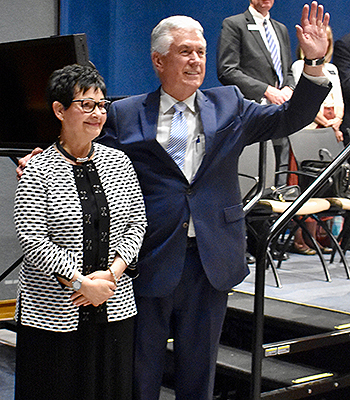 Elder Dieter F. Uchtdorf waves to missionaries as he and Sister Harriet Uchtdorf prepare to depart following a November 5, 2019, devotional at the Provo Missionary Training Center. Photo by Cheryl Taylor. 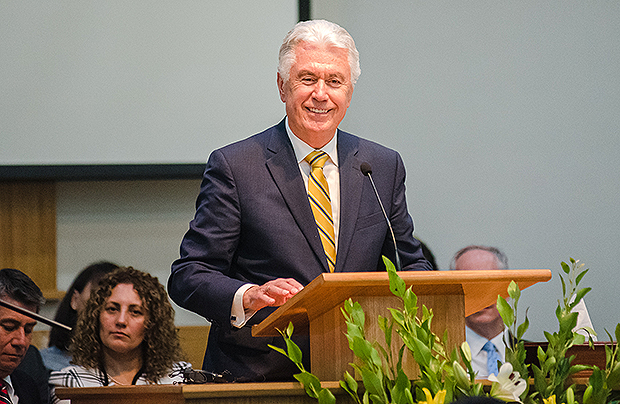 Elder Dieter F. Uchtdorf spoke of the importance of effective ward councils and instilling confidence in youth during a February 15, 2020, leadership conference in Santiago, Chile. Photo courtesy of the South America South Area. 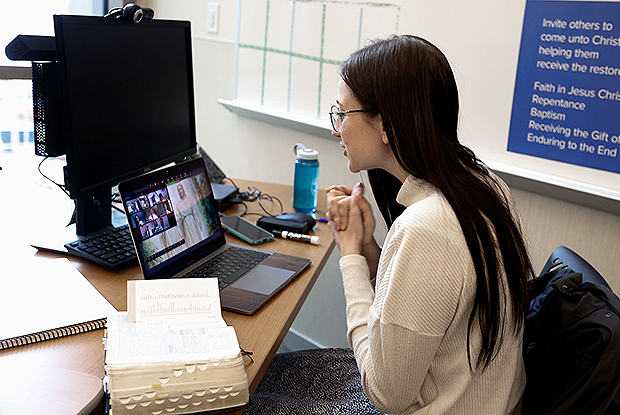 Addie Rutter uses a laptop at the Provo Missionary Training Center to teach French to training missionaries at home on Wednesday, March 25, 2020. In an attempt to control the spread of COVID-19, missionaries are being trained by remote video conference rather than travel to The Church of Jesus Christ of Latter-day Saints' 10 missionary training centers. Photo by Laura Seitz, Deseret News. 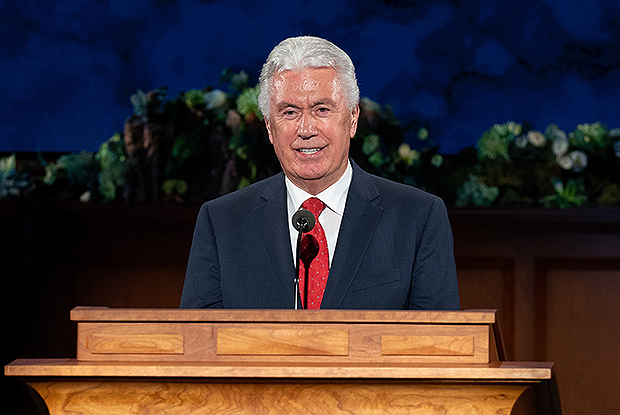