Watch Out for Singles’ Well-Being, Elder Christofferson Says As He Shares Ways to Survive Isolation of COVID-19

“God will support you if you will turn to Him. No one is excluded from this promise.” —Elder D. Todd Christofferson

The COVID-19 pandemic has created “a great season of opportunity” for members of The Church of Jesus Christ of Latter-day Saints to “contemplate belonging,” said Elder D. Todd Christofferson.

Now is a time that requires “a constant consciousness of the well-being of those around you,” said the member of the Quorum of the Twelve Apostles.

This especially includes those who are single or who don’t have traditional family networks to sustain them in this period of illness and death, stifled economies, and oft-altered daily routines.

Speaking to the Church News via videoconferencing weeks after the First Presidency suspended meetings, closed temples, and transported thousands of missionaries to their home countries in response to the COVID-19 pandemic, Elder Christofferson reflected on those dealing with present challenges alone.

“There is a lot we can do for each other,” he said.

As the human race deals with social distancing, travel restrictions, and uncertain access to the necessities of life and financial security, individuals and families worldwide share similar concerns for their safety and well-being, he said. “We all wonder, ‘Am I going to have what I need? . . . Am I going to have access to medical care if I need it?’”

In a Church context, they may have less access to priesthood blessings and less access to ordinances, particularly the sacrament. And they have “a greater challenge in dealing with isolation,” he added.

“In all of this, we have to be more sensitive to the isolation and other challenges that single adults face, more than most of us do—especially single parents, who are carrying such a huge load. It is incumbent on us to give some added attention to creating a sense of inclusion, to be thoughtful about the help that they might need.” 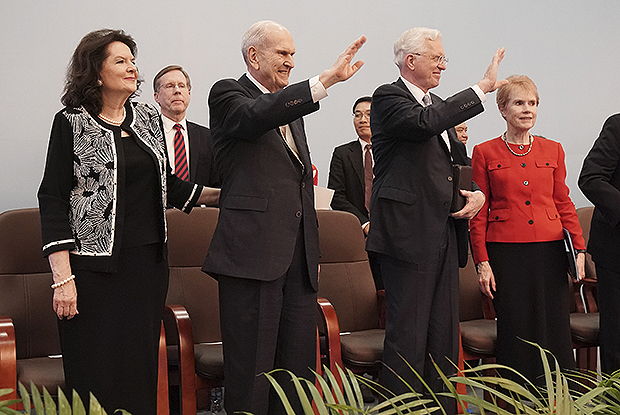 President Russell M. Nelson of The Church of Jesus Christ of Latter-day Saints; his wife, Sister Wendy Nelson; and Elder D. Todd Christofferson of the Quorum of the Twelve Apostles and his wife, Sister Kathy Christofferson, wave after a devotional in Ho Chi Minh City, Vietnam, on November 18, 2019. Photo by Jeffrey D. Allred, Deseret News.

The organization of the Lord’s Church has provided Relief Societies and priesthood quorums to look out and care for one another—in good and hard times, said Elder Christofferson.

“Consider what it means to belong, what it feels like. There is a lot we can do for one another if we have a sense of belonging and brotherhood and sisterhood.”

Challenging times like these create specific opportunities when Relief Society and priesthood quorums “can come into their own and provide what they are uniquely organized to do.”

In spite of social distancing, quorums and Relief Societies should look for “creative interactions” to help their members—including single members—feel this sense of belonging.

Personal revelation can guide these interactions, he added.

“President Nelson said, ‘I renew my plea for you to do whatever it takes to increase your spiritual capacity to receive personal revelation’ [“Hear Him,” Ensign or Liahona, May 2020, 90]. That is powerful.”

When the Lord describes the law of consecration, He talks about “every man seeking the interest of his neighbor” (Doctrine and Covenants 82:19), Elder Christofferson said. “That’s the underlying philosophy or sense that there needs to be in a quorum or in a Relief Society and a family.” 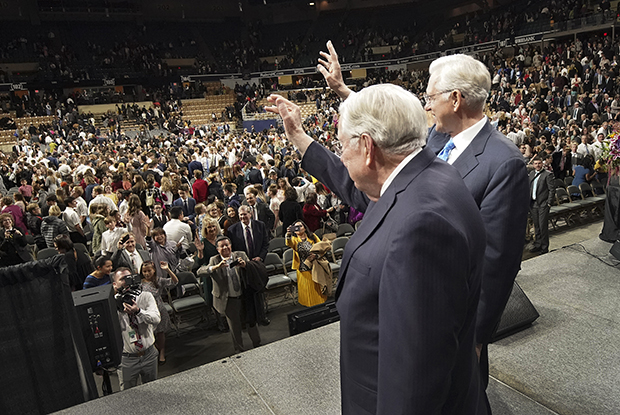 That “constant consciousness of another’s welfare” represents a “coming to Zion or establishing Zion.”

This is countercultural in today’s world, where there is a natural tendency to look inward and question, “What about me? What do I need? How am I going to be happy?” said Elder Christofferson.

Turning outward to others is the concept behind ministering, “that it is higher and holier than simply fulfilling an assignment or checking off a visit box.”

He called for Latter-day Saints to “reorient ourselves a little more toward one another and the well-being of one another.”

While leaders can provide some opportunities for that, it also has to “be something that surfaces within us, without assignment,” he added.

“It is a natural way of living and thinking. It is a matter of growing in our awareness of each other.” 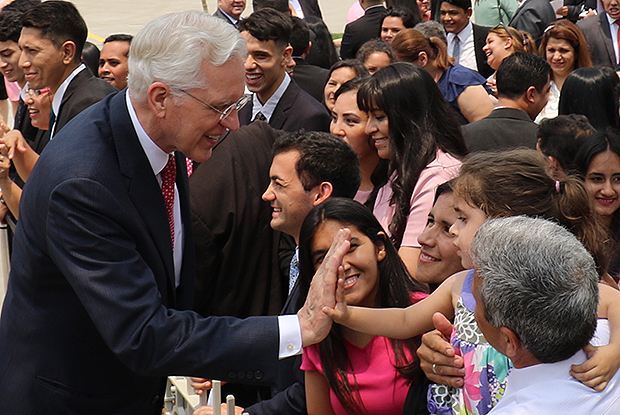 Elder Christofferson said forced solitude can lead to loneliness and can have negative physical and mental health consequences.

The Apostle suggests the following advice for single adults wondering how to deal with the challenges of solitude:

Serve: Looking outside of oneself can lessen isolation, he said. Look at community opportunities, some of which can be found on the Church-sponsored website JustServe.org. “Find a way to contribute. Look for a chance to help, to be kind.”

There are things that can be done online, or there are ways to safely don a mask, gloves, and other protective gear and offer community service, he explained. Many in the Utah community, for example, are participating in ProjectProtect and sewing masks for local frontline medical care providers.

Work: “If you have the opportunity to work from home, do it.” If work is not an option now, “plan for ways to further your career.” Perhaps take online courses.

“Once things open up again, you will be grateful you took the time, while you had the time, to look at career options and career growth. Just because things are on hold for the moment doesn’t mean we can’t prepare for what could be in the future.”

Interact: Call someone, he said. Find ways “to interact as human beings, as brothers and sisters.”

“Just call to talk. You don’t need a particular message or request; just converse,” he said.

Look for missionary and family history opportunities: In current circumstances, some may be a little more open to thinking about religion than in the past, he said. Share the gospel with them. Help the full-time missionaries find those they can teach. Take advantage of extra time to learn about family history, and teach others to do the same.

Read: “I suppose everyone has a list of books they want to read and have not been able to get to,” he said, noting that he enjoys biographies.

Look for things that are ennobling and feed your soul. “Some entertainment as seasoning is also very good.”

Exercise: “This is something I would recommend to anyone but especially someone who is isolated. Go on a walk, inside or outside.”

Develop spiritually: This is a key time for personal spiritual development, to “feast on the words of Christ,” said Elder Christofferson.

“We have a little more quiet time,” he said. “This is the time to learn to ‘hear Him.’”

The prophet has asked Latter-day Saints to develop increased capacity to recognize and receive personal revelation.

“It takes discipline—and intentionality. Take personal responsibility for that. As Brigham Young said, we can be ‘as clay in the hands of the potter.’”

Hold on: For those who are waiting to receive the sacrament, attend the temple, or gather often with others, Elder Christofferson promised the current situations will change. “We won’t be without these things forever,” he said. 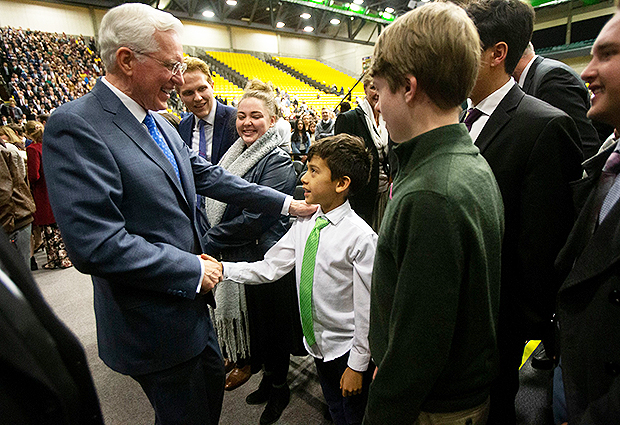 “None of Us Are Forgotten”

During the 1918 global influenza epidemic, George Goates was a farmer who raised sugar beets in Lehi, Utah, said Elder Christofferson. As George began a slow and difficult harvest, the flu claimed four members of his family in the course of six days. At the end of the terrible interlude of building caskets, he headed back to the beet field—past his neighbor’s fields that had already been harvested.

On the way to his fields, he watched wagonload after wagonload of beets being hauled to the factory, driven by neighborhood farmers. It wasn’t until George arrived at his fields, seeing them now harvested, that he learned the beets were his.

As he wept, “he looked up to heaven and said, ‘Thank you, Father, for the elders of our ward.’”

Every member of the Lord’s Church ought to feel like there are a lot of people supportive and mindful of him or her even in unanticipated matters, said Elder Christofferson.

Sometimes single Latter-day Saints feel that “nobody has their back.” But for the Lord “none of us are forgotten,” he added. “Nobody can say, ‘The Lord is not looking for me.’ . . . No one can say that.”

Elder Christofferson recalled a time in his life when an ongoing challenge over an extended period turned his focus to the Lord.

The current pandemic—or any hardship—can “turn us more to Him,” the Apostle said. 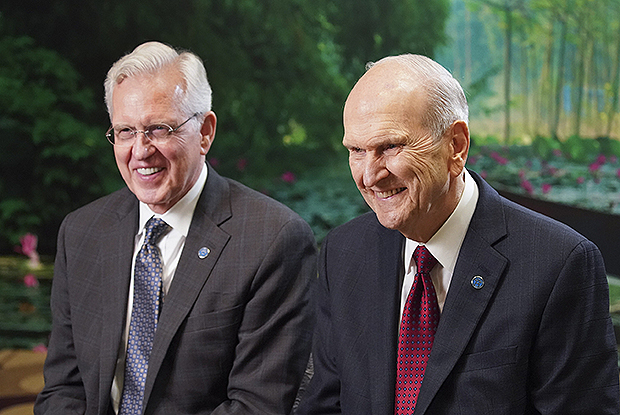 In return, the Lord has promised His children peace. “You don’t know how it’s going to work out or what is going to happen or how you are going to do it, but it will. And you can be at peace.”

Alma, in speaking to his son Helaman, said: “I do know that whosoever shall put their trust in God shall be supported in their trials, and their troubles, and their afflictions, and shall be lifted up at the last day” (Alma 36:3).

Elder Christofferson said those promises also apply “to the here and now.”

That is also his message. “God will support you if you will turn to Him. No one is excluded from this promise.”

That will sustain Latter-day Saints in this great season of opportunity as they are conscious of others and produce a harvest of souls, including their own. Ministering alongside the Savior—and in His way—“will help bring all, including the lonely, safely in.” 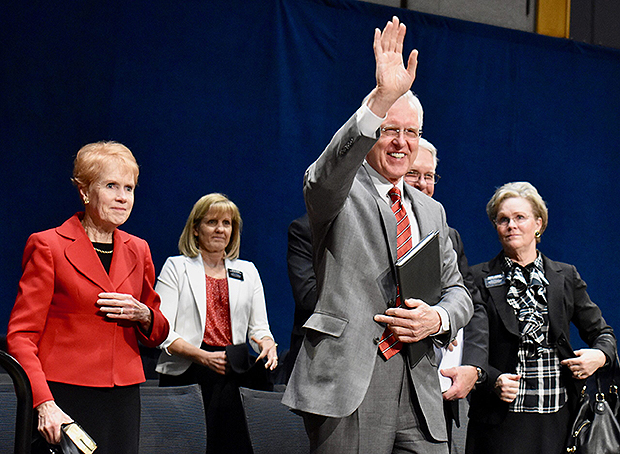 Elder D. Todd Christofferson of the Quorum of the Twelve Apostles waves to missionaries following a Christmas Day devotional at the Provo Missionary Training Center on December 25, 2019, in Provo, Utah. Photo by Scott Taylor, Church News. 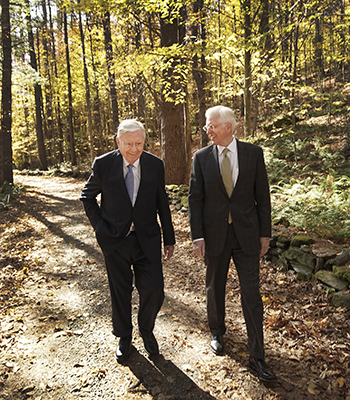