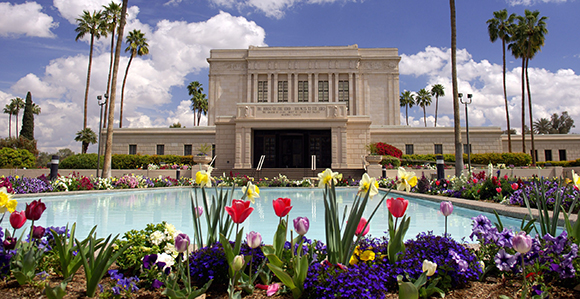 Mesa Arizona Temple. The First Presidency announced March 25 that all temples worldwide are now closed due to continued COVID-19 concerns.

All temples of The Church of Jesus Christ of Latter-day Saints will close today in response to growing restrictions related to COVID-19, the First Presidency announced this evening.

“After careful and prayerful consideration, and with a desire to be responsible global citizens, we have decided to suspend all temple activity Churchwide at the end of the day on March 25, 2020,” wrote the Church leaders in a letter with the same date. “This is a temporary adjustment, and we look forward to the day when the temples will reopen.”

Assuring members of their love and appreciation for their devotion and faith, the First Presidency further explained:

At the time of the announcement, the Church had already closed 111 temples. The remainder of the 168 operating Latter-day Saint temples—located mostly in North America—were open during limited hours to provide living sealing, initiatory, and endowment ordinances.

The First Presidency announced on May 6, 2019, that the Church had discontinued a policy requiring couples who marry civilly to wait one year before being married or sealed in the temple. The change means Latter-day Saint couples whose temple-marriage plans will now be disrupted by temple closures could marry civilly and then have a temple marriage as soon as temples reopen.

In a letter dated Friday, March 13, announcing temporary adjustments to temple work, the First Presidency and Quorum of the Twelve Apostles wrote that they “look forward with great anticipation to the time when temples can again operate at full capacity and extend the blessings of temple work to members and their ancestors.”