Members of the auxiliary presidencies say teaching modesty starts in the home and at a young age. Mothers set an example, but fathers and priesthood leaders can also encourage modesty.

“[Modesty] is a condition of the heart. It is an outward manifestation of an inner knowledge and commitment. It is an expression that we understand our identity as daughters of God.” —Elaine S. Dalton, Young Women general president

Teaching modesty starts in the home and is a reflection of our discipleship, said Sister Linda K. Burton, Relief Society general president. “If we are really deeply converted to the principle of modesty, then it influences not only what we choose to wear but also what we say or view or read. Modest Latter-day Saint women view themselves as ‘distinct and different in happy ways’ from the ways of the world.”

Sister Rosemary M. Wixom said children learn in Primary a strong message of identity: “I am a child of God.”

It is time, she added, to start talking about the responsibilities that come with that knowledge. “Because you are a child of God, then what? With that comes the answer: ‘It is how I dress, it is how I talk, it is my relationship with Heavenly Father and Jesus Christ. Because I am a child of God I will reflect His will in all I do.”

That is not so easy in a world where children see messages that threaten that identity at a very young age.

In fact, the average young person views more than 3,000 ads per day on television, on the Internet, on billboards, and in magazines, according to the official journal of the American Academy of Pediatrics. And children ages 2 to 11 average 32 hours of television viewing a week; those 12 to 17 average 23 hours, according to a study by the University of Michigan Health System.

Sister Dalton said it is important that young people live in a way that they can have the companionship of the Holy Ghost so they can process the media messages that bombard them and sort good messages and examples from false ones.

She said a major problem is that the definition of modesty has changed over the years. “Modesty helps [us] qualify for the companionship of the Holy Ghost,” she said. “We should become sensitive to how we feel in certain clothes.”

Instead of drawing a “line in the sand” regarding what young women should or should not wear, Sister Dalton said it is time that Latter-day Saints draw “a line in their heart. It is believing your body is a temple for your spirit.”

She wants Latter-day Saint young women to come to know they “are precious.”

“Our message is ‘Love who you are. You don’t need to be like the world. You matter. You are important,’” she said.

Sister Ann M. Dibb, second counselor in the Young Women general presidency, said it is important for young women—and their mothers—to ask themselves what they want to be known for. Too much focus on outward appearance can “hide all the inner beauty each woman possesses,” she said.

Sister Dibb said it also helps if dads and priesthood leaders encourage modesty. “An appropriate word of encouragement and acknowledgement of modesty from a father to a daughter makes a big difference,” she explained.

Sister Mary N. Cook, first counselor in the Young Women general presidency, said it is important for mothers to remember that whatever behaviors they adopt, their children will not only adopt but also amplify.

Sister Jean A. Stevens, first counselor in the Primary general presidency, said parents cannot start teaching modesty too early. She said most children have cemented their views of the world by age 5. “The time to teach children is when they are young.”

Families can look to the standards found in For the Strength of Youth. “When moms and dads themselves live it, it’s natural for children to follow.”

Sister Stevens said families should talk about their standards: “Who are we? What is our family going to do? What are we going to choose?”

Sister Cheryl A. Esplin, second counselor in the Primary general presidency, said, “It is refreshing to see girls and young women who stand up for modesty.”

Sister Wixom said, “Dressing modestly can be a creative challenge, but young women today are up to it.” 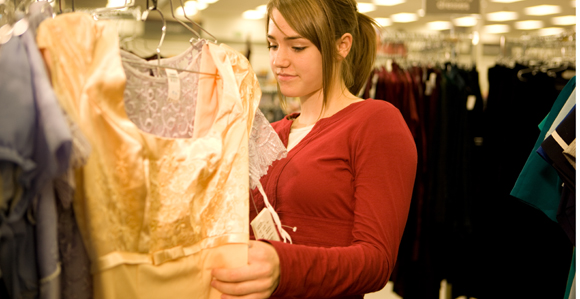 “Teach the why,” advised Sister Burton. “The reason why we do these things is we want to be with and become like our Heavenly Father. You can show you are disciples of Jesus Christ and that you love Him by how you treat your body.”

Sister Wixom emphasized that Church members cannot delegate to the media the teaching of modesty to their children.

One study said that young women and girls lack the tools to validate themselves. “They look outside themselves for validation,” said a 2007 study by the Women’s Foundation of California on the impact of pop culture on girls and young women. “It affects,” the study said, “identity, behavior, and opportunity.”

And in 2002, fifth graders told researchers they were dissatisfied with their bodies after watching a popular music video and television sitcom. And a 2009 study of adolescents and young adults showed that 11- and 14-year-olds largely based their self-image on how they thought others viewed them (see “The End of Innocence,” Deseret News, Sept. 18, 2011).

She said that when a person walks out of the waters of baptism, they’ve made a covenant to “walk out of the world and into the kingdom of God.”

Sister Burton said it is important for parents to teach their children how it feels to have the Holy Ghost and how to respond to feelings He gives them—particularly regarding choices about modesty.

“Daily gospel habits in the home are the foundation,” said Linda S. Reeves, second counselor in the Relief Society general presidency. “They strengthen us and keep us close to the Spirit.”

She encouraged parents to involve themselves with their children by helping them fulfill the inspired programs of the Church—Faith in God, Personal Progress, and Duty to God.

Referencing the mothers of the 2,000 stripling warriors, whose story is recounted in Alma in the Book of Mormon, Sister Stephens said it is important that children understand that their parents “know it.” “We would hope that the best examples of modesty are found within our homes,” she said.

“We need to help connect the dots from what we believe to what we do,” said Sister Burton. “We need to ask, ‘What would Jesus do?’ and then answer, ‘I do only things that please Him.’ Modesty surely pleases the Lord. But it requires courage.”

And Sister Burton urges parents to help their children learn to make good choices. “Sometimes they will make mistakes. But we can help them learn from those mistakes,” she said.

Sister Dalton wants young women to focus on who they are rather than what they look like. Then their outward appearance will reflect their inner beauty.

“Modesty is often talked of in terms of dress and appearance, but modesty encompasses much more than the outward appearance,” said Sister Dalton. “It is a condition of the heart. It is an outward manifestation of an inner knowledge and commitment. It is an expression that we understand our identity as daughters of God. It is an expression that we know what He expects us to do. It is a declaration of our covenant keeping. A question in the For the Strength of Youth booklet really is the question each of us must consider: “Am I living the way the Lord wants me to live?”