Elaine Dalton was born and raised in Ogden, Utah. She received her bachelor's degree in English from Brigham Young University.

Sister Dalton married Stephen E. Dalton in the Salt Lake Temple. They are the parents of five sons and one daughter and the grandparents of 16 grandchildren.

Sister Dalton enjoys running and hiking with her family and dancing with her granddaughters. She loves to read, especially the scriptures, and she loves the Lord. She has a deep admiration for the young women around the world and firmly believes that one virtuous young woman, led by the Spirit, can change the world.

Her favorite scripture and life's motto is found in Proverbs 3:5-6: "Trust in the Lord with all thine heart; and lean not unto thine own understanding. In all thy ways acknowledge him, and he shall direct thy paths."

We Are Daughters of Our Heavenly FatherApril 2013 General Conference

Be Not Moved!April 2013 General Conference

Now Is the Time to Arise and Shine!April 2012 General Conference

Remember Who You Are!April 2010 General Conference

A Return to VirtueOctober 2008 General Conference 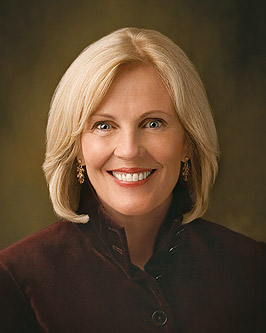