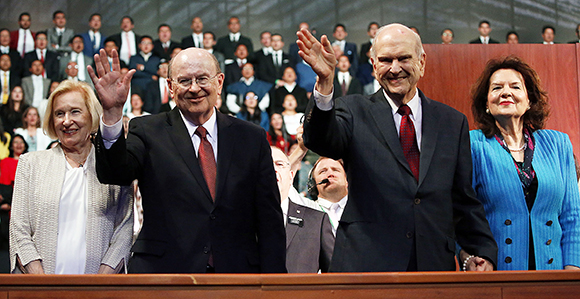 President Russell M. Nelson of The Church of Jesus Christ of Latter-day Saints and his wife, Sister Wendy Nelson, right, along with Elder Quentin L. Cook of the Quorum of the Twelve Apostles and his wife, Sister Mary G. Cook, say goodbye at the end of a Latin America ministry tour devotional in Quito, Ecuador, on Monday, August 26, 2019. Photo by Ravell Call, Deseret News.

“It’s the greatest blessing and opportunity of my life to travel the earth on the errand from the Lord to employ those keys in the blessing of individuals and families.” —Elder David A. Bednar

The Church News documented the travels of the First Presidency and Quorum of the Twelve Apostles this year as they traveled around the world and met with Latter-day Saints and government and civil leaders. Here is a look back at nine videos you might have missed from their travels.

In January, President Russell M. Nelson and his wife, Sister Wendy Nelson, visited Paradise, California, to mourn with the victims of the Camp Fire. Their visit came just two days after the death of the Nelsons’ second daughter, Wendy Nelson Maxfield.

“There’s nothing we’d rather do than try to be of help to others,” President Nelson said. “If you want to feel better, forget about yourself and serve somebody else.”

While in Rome for the Rome Italy Temple dedication in March, the 15 living prophets and apostles testified of the role of priesthood keys, both anciently and today.

“It’s the greatest blessing and opportunity of my life to travel the earth on the errand from the Lord to employ those keys in the blessing of individuals and families,” said Elder David A. Bednar of the Quorum of the Twelve Apostles.

Elder Gerrit W. Gong of the Quorum of the Twelve Apostles shared how “deeply touched” he was to see the way President Nelson ministered to large crowds, to single families, and to the one during the Pacific ministry tour.

“There’s a sense of connection and covenant belonging together that makes each one feel as though this is for them individually, for their families, and for large groups, countries at the same time. That’s a remarkable thing to feel and see,” said Elder Gong.

President Nelson traveled to Auckland, New Zealand, on May 21 to express his love for those impacted by the March 15 shootings in Christchurch and reiterated an unforgettable message of unity: “We’re brothers. We’re brothers.”

“It’s incomprehensible that anybody could do that to another human being,” he said. “So what can we do? We can pray, we can love, we can minister.” Each of the two mosques damaged in the attacks received a total of $50,000 from the Church.

Speaking at the 110th annual national convention for the National Association for the Advancement of Colored People (NAACP) in Detroit in July, President Nelson said, “Arm in arm and shoulder to shoulder, may we strive to lift our brothers and sisters everywhere, in every way we can.”

The Reverend Amos C. Brown, pastor of San Francisco’s Third Baptist Church, commented in this video on how he sees the hand of God between the two organizations.

“I do not consider it to be accidental. It was providential that the NAACP and The Church of Jesus Christ of Latter-day Saints will come together on common ground,” he said. “We need each other. We should not turn on each other in these difficult times. We should turn to each other. Each of us has something to offer.”

During the Latin America ministry tour, President and Sister Nelson and Elder Quentin L. Cook of the Quorum of the Twelve Apostles shared their thoughts about the impressive youth in Central and South America who are “hungry to hear the word of God” and “lift up above the mediocrity.”

“This personalization and connecting with them—I wish that you could be sitting where I am and see all the faces light up like Christmas trees,” said Elder Cook of President Nelson interacting with the youth.

Sharing their experiences of traveling with their husbands, Sister Nelson and Sister Mary Cook, wife of Elder Cook, sang a duet in this next video.

“When we travel, I think of a statement by President Kimball: ‘I should come and see this country sometime when I come back,’” said Sister Nelson. “It’s not about sightseeing. It is about Saint-seeing.”

The purpose of ministering is ultimately to help Latter-day Saints be ready for what lies ahead, said Sister Cook. “There’s nothing sweeter. And you feel safe that you’re doing what the Lord wants you to do and you’re helping to prepare for His Second Coming.”

They talked about the spirit of love within the First Presidency and Quorum of the Twelve Apostles. “We feel as brothers in the gospel of Jesus Christ charged and commissioned to carry the name of Jesus Christ and His Church to the world.”

President Nelson and Elder Christofferson embarked on a ministry through Southeast Asia in November. During their visits in Vietnam, Cambodia, Singapore, and Indonesia, they expressed their faith in the Latter-day Saints in each country and how they would help the Church grow.

“I think it was a particularly significant message at this point to have the President of the Church come see a relatively small group and by his presence say, ‘You matter. You’re in our hearts, you’re in our minds, in our prayers. The Lord is mindful of you. And we’re mindful of you,’” Elder Christofferson said.

“This is maybe a tender time, a new beginning for the Church here, but it will grow. It will be strong.”