“When we are guided by the prophets, we actually follow the counsel because of Him—the Savior. His grace is sufficient for each of us.” —Elder Paul V. Johnson of the Seventy

Three weeks after their wedding, Paul V. Johnson and his wife, Jill Johnson, attended a devotional where President Spencer W. Kimball offered counsel about marriage. Now 44 years into marriage, the couple still follows that guidance received from the former president of the Church.

The opportunity to be guided by living prophets is one blessing Elder Johnson, now a General Authority Seventy, has pondered as he has followed President Russell M. Nelson’s direction to consider the impact of the First Vision on his life.

Choosing to follow the prophet results in promised blessings, but it does not imply immunity from opposition or mockery, Elder Johnson told Brigham Young University–Hawaii students at a campus devotional Tuesday, February 18.

“Waiting and believing in future promised blessings can be a challenge in a day when we get frustrated if a computer search takes more than 0.62 seconds,” Elder Johnson said.

When he was younger, he added, he could not understand why people in the Book of Mormon chose to reject the prophets. He later studied accounts of people’s reactions to messages delivered by prophets.

Why Do People Reject Prophets?

As recorded in the 3 Nephi, manifestations of the prophet Nephi’s powerful ministry included raising his brother from the dead—an act that drew an angry response from the public. The people “were angry with [Nephi], even because he had greater power than they” (3 Nephi 7:18).

Thomas B. Marsh, the first President of the modern Quorum of the Twelve Apostles, became disaffected from the Prophet Joseph Smith because of jealousy, Elder Johnson said. After returning to the Church, Marsh explained his former feelings: “I got mad and I wanted everybody else to be mad.”

This type of jealousy is one of many reasons people reject the prophets. Scriptural records also tell of resistance to prophets’ invitations to repent. Samuel the Lamanite described the tendency to retaliate against leaders who identify the people’s sins: “You will say that he is a false prophet, and that he is a sinner, and of the devil, because he testifieth that your deeds are evil” (Helaman 13:26).

On the other hand, those who say individuals should do whatever they desire and there is no such thing as sin are hailed as prophets and rewarded by the people, Samuel taught. Such a person is publicly praised, and “because he speaketh flattering words unto you, and he saith that all is well, then ye will not find fault with him” (Helaman 13:28).

As a society drifts further from God’s commandments, Elder Johnson said, those who adhere to divine teachings become outliers, subject to derision and disdain. The human propensity to reject correction is exacerbated when social sensibilities grow increasingly secular.

Many of such drifting societies in the Book of Mormon, like the city of Ammonihah, were eventually destroyed in war, Elder Johnson added, noting that it is easier to see in hindsight the consequences of rejecting the prophets.

Social pressures do not remove an individual’s ability to choose, Elder Johnson said. Following the prophet is a personal choice.

He recounted a conversation he had with someone about a topic that has political implications but that has not been specifically addressed by the Church or the prophet. The person said that if the prophet told him to do what they were discussing, he would not do it and would no longer believe the prophet was called of God.

“I was taken aback and thought that that was a pretty rash decision,” Elder Johnson said. “But after the conversation, I wondered: Was there something that I felt strongly enough about or that society’s current trends were so powerfully against that could cause me to reject the prophet?

“When a prophet’s counsel clashes with our personal feelings, desires, or convictions or that counsel opposes widely held views of society, what is our reaction?” Elder Johnson asked, quoting the Prophet Joseph Smith: “I have tried for a number of years to get the minds of the Saints prepared to receive the things of God; but we frequently see some of them, after suffering all they have for the work of God, will fly to pieces like glass as soon as anything comes that is contrary to their traditions: they cannot stand the fire at all.”

Elder Johnson noted that Samuel the Lamanite asked the people of his time, “How long will ye suffer yourselves to be led by foolish and blind guides?” (Helaman 13:29). 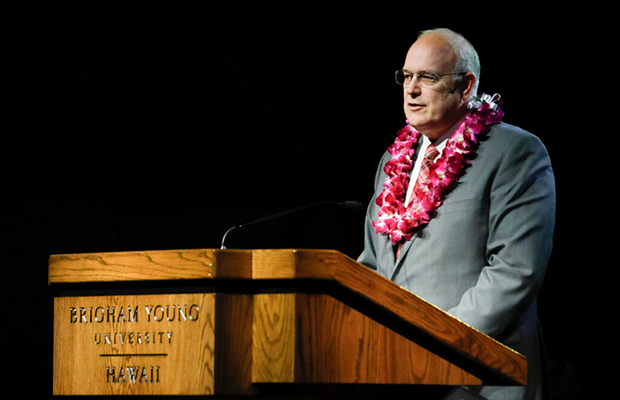 Those who rejected prophetic counsel in favor of appealing philosophies would not have thought of themselves as following “blind guides,” Elder Johnson said. Rather, those who misled people were likely viewed as “enlightened, forward-looking, brilliant, and socially aware.”

He imagined some of the “blind guides” from the Book of Mormon as social media users today. Perhaps Sherem, who flattered the people with eloquent language, would be popular on Twitter, Elder Johnson suggested: “He would have many catchy, clever tweets that would be retweeted because he knew just how to turn a phrase or place a barb.”

Nehor’s fashionable clothing and physical attractiveness might result in many Instagram followers, allowing him to model “the ‘good life’ without the constraints of commandments and use his pattern of bearing down on the Church and its teachings,” Elder Johnson said.

Meanwhile, Korihor would mock believers on his YouTube channel and “gather more subscribers as his message got out that ‘whatsoever a man did was no crime,’” (Alma 30:17), he added.

These patterns of flattery and falsehood are not unique, Elder Johnson taught: “The underlying current of all their communications would be that there is no Christ. Their teachings are not so modern or original. They are plagiarized from the author of lies.”

Such “alternate teachings” sought by individuals and societies allow them to reject the Lord’s way and adopt their preferred lifestyles without “pesky guilt,” Elder Johnson said.

He quoted Elder Jeffrey R. Holland of the Quorum of the Twelve Apostles, who said, “Sadly enough, my young friends, it is a characteristic of our age that if people want any gods at all, they want them to be gods who do not demand much, comfortable gods, smooth gods who not only don’t rock the boat but don’t even row it, gods who pat us on the head, make us giggle, then tell us to run along and pick marigolds.”

Elder Johnson added that those who choose to follow the prophet must be willing to accept scorn and unpopularity. 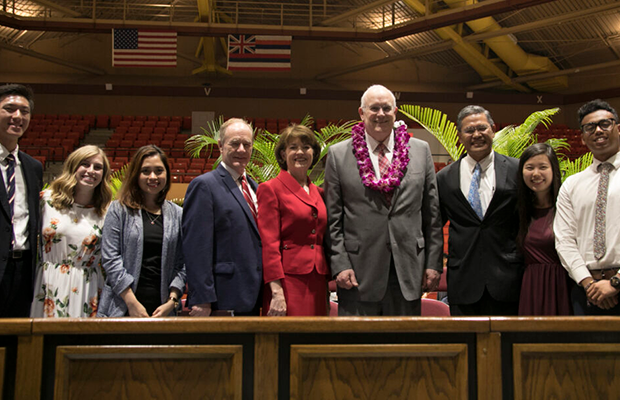 Prophets do not seek personal gain but rather beckon individuals to Jesus Christ.

In Lehi’s vision of the tree of life, after he ate the fruit, he motioned to his family members to come and partake of it as well, Elder Johnson said. “He wanted them to feel the love of God and the joy that came because of that love. He wasn’t interested in building a fan base or having people worship him. He was trying to lead them to the Savior.”

He recalled a recent conversation with President Nelson in which the prophet asked Elder Johnson and his wife if they would be willing to accept an assignment. Sister Johnson responded, “We’d do anything for you, President Nelson.” The prophet promptly replied, “Do it for Him.”

This experience taught him and his wife a valuable lesson, Elder Johnson said. Although President Nelson has always been loving, kind, and respectful toward them, they needed to be aware that they were following the Savior—not just taking advice from President Nelson.

“When we are guided by the prophets, we actually follow the counsel because of Him—the Savior. His grace is sufficient for each of us,” Elder Johnson taught.

President Nelson himself has provided a powerful example of acting on prophetic counsel. “He gave up a prestigious career opportunity as a result of counsel from a prophet,” Elder Johnson said. “As a very busy surgeon with a large family, he studied Chinese because the prophet made a comment about needing members of the Church who could speak Chinese.” He also enthusiastically followed President Thomas S. Monson’s directive to study the Book of Mormon.

Elder Johnson quoted Sister Wendy Nelson, who testified of her husband’s divine calling: “I can take any witness stand in any nation on the earth to tell you for sure that Russell Marion Nelson has been called by God to be the Lord’s prophet on the earth at this time.”

“Let’s have the courage to follow, sustain, and defend” the Lord’s guidance given through prophets, Elder Johnson said. “It won’t always lead to smooth sailing, but it will always lead to promised blessings and personal growth.” 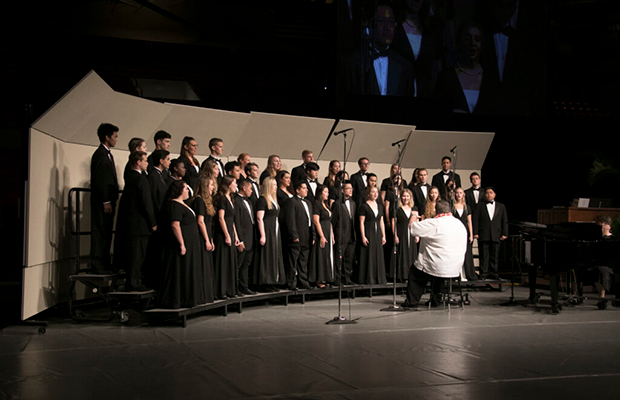 A student choir sings at a Brigham Young University–Hawaii devotional on campus in Laie, Hawaii, on Tuesday, February 18, 2020. Photo by Trisha Panzo, BYU–Hawaii. 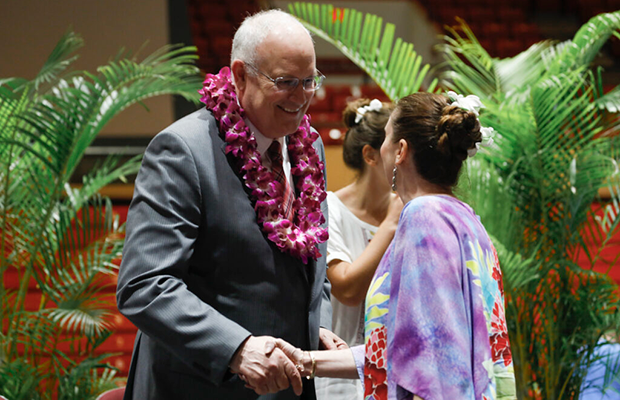 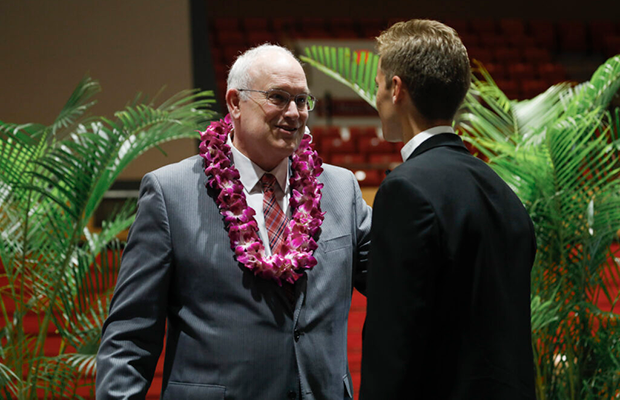