“The object of our prayers should be to secure for ourselves and for others blessings that God is eager to bestow, according to His will and timing.” —President Bonnie H. Cordon, Young Women General President

As she prayed for the students and faculty of Brigham Young University, President Bonnie H. Cordon felt a divinely granted awareness of their needs.

“I was given a small glimpse of the deep loneliness some of you are dealing with,” the Young Women General President said at the devotional held in the campus’s Marriott Center on Tuesday, February 4. “I felt great anticipation with those of you beginning a new adventure. And I became mindful of the anxiety of those carrying burdens or in transition.”

These insights taught her of God’s intimate knowledge of and love for each individual: “He cares about you in a way that human language cannot adequately express,” she said.

The universal human yearning for connection to the divine and others, President Cordon added, is what led the young Joseph Smith to kneel and pray, seeking answers, solace, and guidance from God. His solution to his yearning is the same for everyone, she said: “Ask of God.”

Consistently going to Heavenly Father in prayer, she added, “helps us see ourselves and Him in a clearer light.”

Prayer Is a Guide

President Cordon outlined the pattern for prayer taught by Jesus Christ, which she said allows the child’s will to be aligned with that of the Father.

She said that “recently as I uttered the familiar words to address my Heavenly Father in prayer, I was overcome with a sense of awe. I paused and thought, ‘Who am I to address God?’ But almost instantly, an innate knowledge was rekindled—He is my Father, and I am His daughter.”

President Cordon realized that God wants to connect with her as much as she desires to communicate with Him.

Having established a connection with Heavenly Father, she said, the next step of prayer is to offer thanks. “There is a power that comes as we are generous with our gratitude,” she added, sharing a childhood memory to explain.

When she was four years old, President Cordon was asked to bless her family’s dinner. She kept an eye open during the prayer to make sure she did not forget to bless any item of food or member of the family.

“I prayed for the mashed potatoes, the meat, the corn; then I prayed for Mom, Dad, Linda, and Glenn,” President Cordon said. As she was about to close her prayer, her mother whispered in her ear, reminding her to bless her brother Rodney.

“With the full wrath of a four-year-old,” President Cordon said, she answered, “No, and you know why!”

While she does not recall why she was upset with her brother, this memory has taught President Cordon about the value of expressing gratitude even when angry or hurting. “What if we offered thanks for those situations that bring us frustration, sorrow, or even anguish?” she asked. “Could we open our heart and offer thanks for a trial while still experiencing it?”

Sincerely thanking God during difficult times, President Cordon said, allows Him “to help us see our trials and ourselves in a different way. Thanking Him, rather than asking for something to be taken away, helps us accept His unceasing effort to mold us into who we are meant to become.”

After expressions of gratitude, a prayer typically includes requests for specific blessings. “The object of our prayers should be to secure for ourselves and for others blessings that God is eager to bestow, according to His will and timing,” President Cordon said.

She recently spoke with a BYU student who admitted she was struggling in her statistics course. President Cordon responded, “You know, God is really good at stats.”

Unlike Google, President Cordon said, “prayer may not offer you over 34 million results on a single topic, but through prayer you may be blessed with a clear mind and quickened understanding.”

President Cordon also acknowledged the perceived challenges of prayer: “There may be some of you who are thinking, ‘I have prayed and continue to pray, but the Lord doesn’t answer.’”

She, too, has questions and concerns that she prays about repeatedly. “There is a reason prayer is referred to as ‘a form of work,’” she added. “At some point, we all ‘wait upon the Lord.’”

Closing a prayer in the name of Jesus Christ means recognizing His role in one’s life, President Cordon said, and it “puts our gratitude and our asking in the context of the divine plan of happiness,” of which He is the center.

She then paused and asked the audience members to reflect on what they had received the previous week as they asked God in prayer, encouraging them to write down their answers after a few moments of silence.

Prayer Is a Source of Solace

When Hana was serving a mission in the United States, she was transferred to an area where the members invited the missionaries over for dinner four to five times a week. The first night, she was excited to be treated to pizza for dinner. The next night, another family served them pizza.

After two weeks of pizza for dinner, Hana began to dread dinner appointments and prayed to Heavenly Father for a meal of fresh vegetables.

To her surprise, the next dinner they were served was full of vegetables. She thanked Heavenly Father for the answer to prayer and then asked Him if they could be served curry and rice the next night. Her prayer was answered again.

After a week of praying for specific meals and receiving exactly what she asked for each time, Hana said she prayed and her “heart felt light, unburdened, and grateful for such a mindful and loving Father in Heaven.”

In December 2016, President Cordon said, “life sent me a hurricane of sorrow.” On a family vacation to a Disney theme park, her oldest grandson, 2½-year-old Derek, stopped breathing in the middle of the night.

President Cordon stayed with the family at the hotel while Derek’s parents rushed to the hospital. She knelt and prayed for him to recover so that he could continue having fun on their trip.

Instead, she received a shocking answer: “As I was praying, the Spirit gently but unmistakably impressed on my mind, ‘Little Derek has returned home to heaven.’”

Though she had not expected that response from the Spirit, President Cordon knew it was true. In the midst of her grief, she felt the “peace of God, which passeth all understanding.”

“I still have a hole in my heart for little Derek and will until I am able to see him again, but until then I gain solace in the Lord and keep moving forward, building on the sure foundation of our Savior Jesus Christ,” she said.

No matter what trials come in this life, President Cordon added, God knows each individual and offers comfort, blessings, and rest. 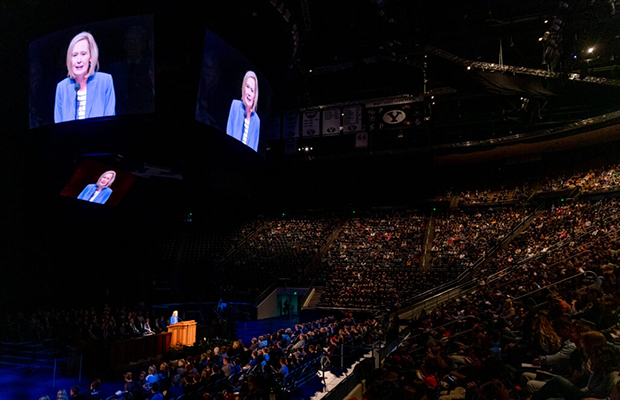 Prayer Is a Promised Stay

“With promised guidance and proven solace, you would think we would ask of God continually,” President Cordon observed. Yet it is easy to cease to pray, letting a once close relationship with God grow distant.

The brother of Jared in the Book of Mormon went to God often in prayer, asking Him to spare his people’s language and then asking for guidance about where they should move. However, once they had made it to the seashore, they stayed there for four years, and the brother of Jared allowed his commitment to prayer to lapse.

The Book of Mormon reads, “For the space of three hours did the Lord talk with the brother of Jared, and chastened him because he remembered not to call upon the name of the Lord” (Ether 2:14).

Drawing on the example of this account, President Cordon shared President Russell M. Nelson’s advice to someone who felt estranged from God: “Understand that in the absence of experiences with God, one can doubt the existence of God. So, put yourself in a position to begin having experiences with Him. Humble yourself. Pray to have eyes to see God’s hand in your life and in the world around you. Ask Him to tell you if He is really there—if He knows you. Ask Him how He feels about you. And then listen” (“Come, Follow Me,” Ensign or Liahona, May 2019, 90).

The story of the brother of Jared is hopeful because he chose to repent and be guided by the Lord again, President Cordon added.

“Our Heavenly Father and our Savior Jesus Christ love us,” she said. “Even if we’ve spent four years on the seashore and never called home, They are there, ready and waiting to bless us.

“How would our relationship with our Father change if the passion and sincerity of our prayers did not wane after the crisis has passed? Can you imagine the truths we will discover and the wonders we will achieve as we choose to ‘pray always’ with the same fervor we plead with when we are in need?”

Intentional, sincere prayer is an invaluable blessing, President Cordon testified, inviting students to “allow it to be your solace, guide, and stay.”

Seth Abrams, a BYU student from Spokane, Washington, said President Cordon’s message gave him “the courage to ask” for the blessings God is eager to give. “I learned that I . . . need to really figure out what to ask for,” he said, adding that he also wants to implement more gratitude in his prayers.

“I liked how she gave both examples of getting exactly what you want when you want it and also not getting what you want but still being OK with it,” said Allison Dunn, a student from Connecticut.

Cheyanne Green, a student from Iowa, said the devotional touched her because she has felt recently that she has not received the answers to prayer she wanted. President Cordon’s message that “prayer is considered work” and that a meaningful connection to God requires continual effort helped her better understand the purpose of prayer.

“She renewed my hope,” Green said of President Cordon. 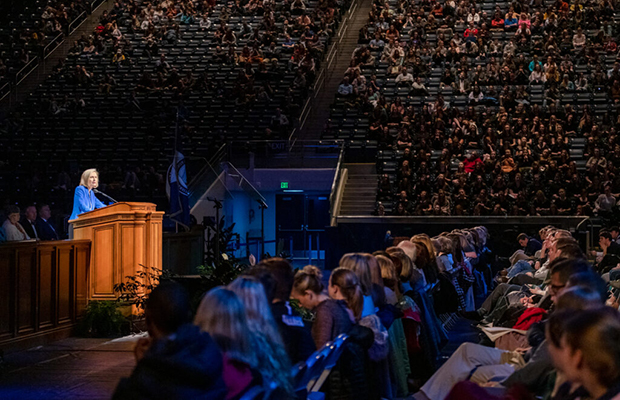 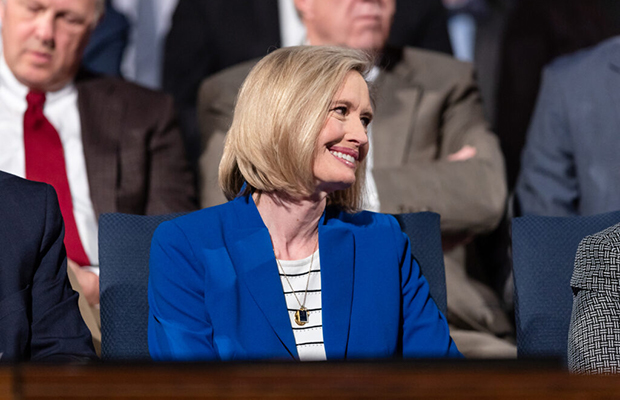 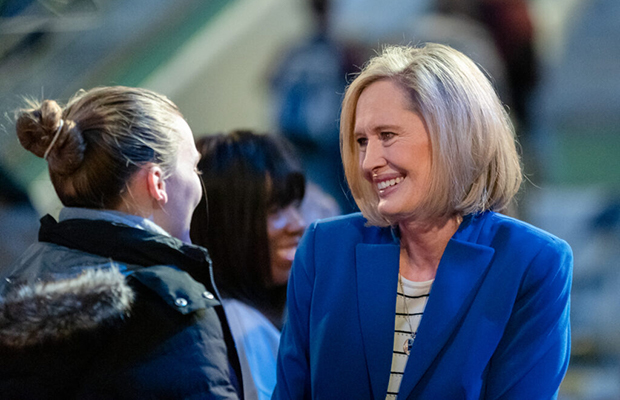