At the end of an April 2018 training meeting about the Church-wide shift to ministering, President Russell M. Nelson stood before the General Authorities and general officers of the Church and affirmed the divine injunction to love one’s neighbor—the second great commandment as taught by Jesus.

Speaking to Brigham Young University–Idaho students at a campus devotional Tuesday, January 28, Elder Rasband asked, “What was he trying to teach us?”

Though President Nelson did not elaborate on this reminder at the meeting, it has prompted Elder Rasband to consider the connection between loving others and loving God.

Serving others in any way is “a great gift” and an essential component of true discipleship, Elder Rasband said, but coupling love of others with love of God “is an invitation to love our neighbor with increased wisdom and impact. When our service is connected to the love of God, when our service is connected to the Savior, it has greater power; indeed, the power to save.”

Elder Rasband shared his conviction that President Nelson’s statement is “a manifestation of a key principle on which the Lord has been trying to focus us in ways small and large.” That principle, he said, is the need to center everything we do on Jesus Christ.

Not only does service become more meaningful when connected to the Savior, but paying attention to the vocabulary used to talk about beliefs can help Church members keep their sacramental covenant to take His name upon them and always remember Him.

“I want to identify a few examples where our gospel language sometimes develops patterns that can inadvertently distract or distance us from the Savior and the real source of power,” Elder Rasband said. “My goal is not to make anyone ‘an offender for a word,’” he added, acknowledging that all Church members use some of this imperfect word choice. “My hope is to extend an invitation to consider how our gospel vocabulary can help or hinder our ability to always remember Him.”

The Correct Name of the Church

Perhaps the most obvious adjustment to be made to gospel vocabulary is the one recently emphasized by President Nelson: the need to use the full, correct name of the Church.

Quoting the prophet’s October 2018 general conference talk “The Correct Name of the Church” on the subject, Elder Rasband said using the Church’s full name “is not a name change. It is not rebranding. It is not inconsequential.”

He then shared an experience that helped him realize why refocusing on the correct name of the Church is “consequential.” In December 2019, Elder Rasband and his wife, Mary, attended a training seminar required for prison volunteers as part of his stewardship over Church members incarcerated in Utah. As volunteers stated the organization with which they were affiliated, several of them said, “The Church of Jesus Christ of Latter-day Saints.” Eventually, the other Church members in the room began saying simply, “The Church of Jesus Christ.”

“It felt to me like a series of small but powerful testimonies,” Elder Rasband said. “These faithful volunteers were identifying themselves as followers of Christ, committed to his admonition to come unto those in prison.” 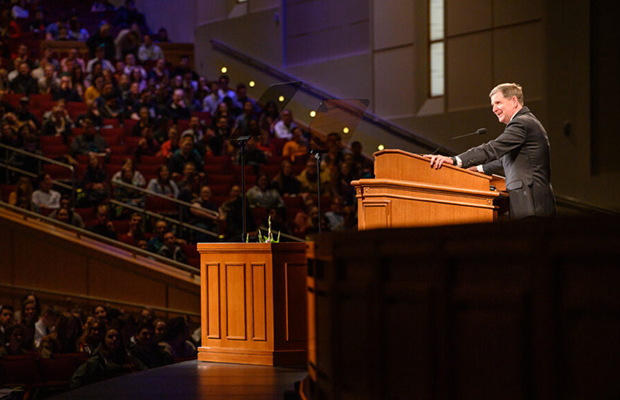 The blessings promised by President Nelson for efforts to use the Church’s correct name will be both individual and collective, Elder Rasband said.

“The project is not to eagerly call out mistaken usage in social media posts—nor is the project to signal our own virtue because we know and use the correct verbiage,” Elder Rasband said. “Instead, the Prophet’s urging to use the correct name of the Church is an invitation to center ourselves and our faith more fully in Jesus Christ, and, by our example, joyfully invite others to do the same.” 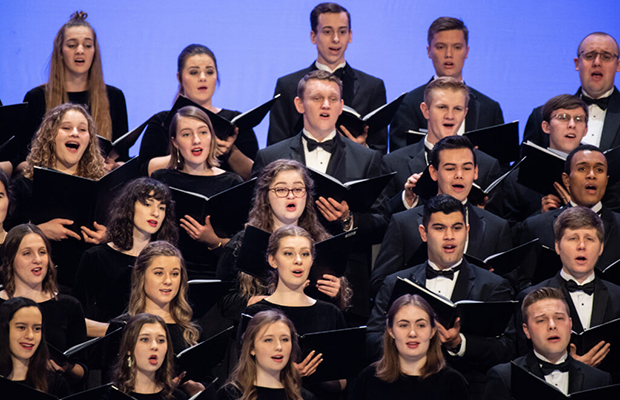 A choir of BYU–Idaho students sings at a campus devotional on January 28, 2020. Photo by Ericka Sanders.

The Atoning Sacrifice of Jesus Christ

The effort to keep Jesus at the center of gospel vocabulary extends beyond using the correct name of the Church. Elder Rasband quoted President Nelson’s April 2017 general conference address “Drawing the Power of Jesus Christ into Our Lives” in which he said, “It is doctrinally incomplete [to use] shortcut phrases, such as ‘the Atonement,’ or ‘the enabling power of the Atonement,’ or ‘applying the Atonement’ or ‘being strengthened by the Atonement.’

“These expressions present a real risk of misdirecting faith by treating the event as if it had living existence and capabilities independent of our Heavenly Father and His Son, Jesus Christ,” President Nelson counseled.

Similar to linking love of God with love for others and using the Church’s full name, the doctrine of the Atonement of Jesus Christ “is best understood and appreciated when connected to the Savior,” Elder Rasband said. As President Nelson stated, “There is no amorphous entity called ‘the Atonement’ upon which we may call for succor, healing, forgiveness, or power. Jesus Christ is the source.”

Using the Savior’s name more frequently can serve as a reminder of covenants to always remember Him, Elder Rasband said. To illustrate the significance of linguistically clarifying Christ’s central role, he put the issue in grammatical terms: “Even if we, as members of the Church, understand that the word ‘Atonement’ is a product of the Savior’s sacrifice, and even if we know that ‘Mormon’ belief is centered on a resurrected, glorified, and embodied Christ who died for our sins, others not of our faith may not understand that. They will be left wondering about the antecedents behind our abridged vocabulary.”

Emphasizing the Savior through word choice can both clarify doctrine for those who may not “know the backstory” and provide an important reminder for members of the Church about His central role, Elder Rasband said.

In this way, using the name of Jesus Christ is testifying of Him. 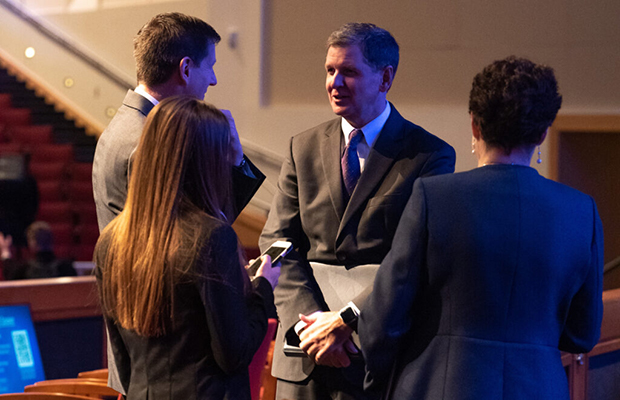 Elder James R. Rasband, a General Authority Seventy, speaks to students after a devotional at the BYU–Idaho Center. Photo courtesy of Brooke Larsen.

Faith in the Lord Jesus Christ

Another instance of “truncated vocabulary” that can be misleading, Elder Rasband suggested, is the use of the word “faith.”

The Church’s fourth article of faith states that the first principle of the gospel “is not faith unmodified, but ‘faith in the Lord Jesus Christ,’” he said. “The difference is subtle but crucial. If we decouple faith from the Savior, we run the risk of thinking of faith as something like the power of positive thinking—we just need enough ‘faith,’ enough wanting it, and then we can control our circumstances.”

Verbal separation of faith from the Savior can give the false impression that faith constitutes a means of coercing God to perform one’s will rather than submission to God’s will.

Elder Rasband quoted Elder Dieter F. Uchtdorf of the Quorum of the Twelve Apostles, who said faith requires trust in God: “The purpose of faith is not to change God’s will but to empower us to act on God’s will.”

While he does not wish to criticize positive thinking or the use of the word “faith” by itself, Elder Rasband added, he wants “to point out how often our linguistic short-cuts seem to leave out the Savior. My desire is that we will remember that the most important object of our faith—and the first principle of the gospel—is faith in the Savior.” 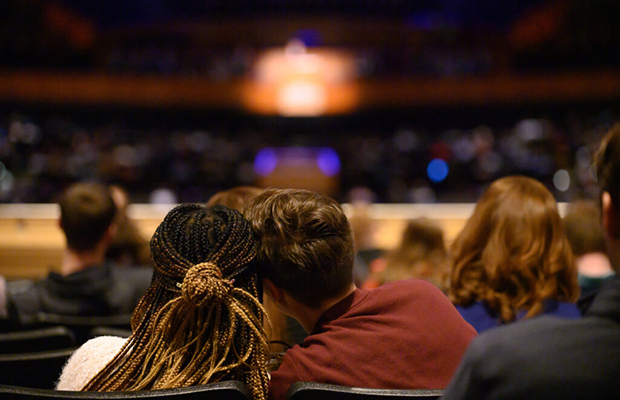 When serving as missionaries, many members of the Church talk about numbers of baptisms and “getting baptisms” within a certain time frame, Elder Rasband noted. It can be stressful for missionaries to conceive of counting baptisms as a measure of “success.”

Missionaries rightfully focus on inviting people to be baptized, he said. The Savior’s own final instruction to His disciples after His Resurrection was to baptize all nations.

“But it is critical to remember and reinforce baptism’s antecedent connection to the Savior,” Elder Rasband said. “Our purpose is not to ‘get baptisms’ per se, but to invite people to take upon themselves the name of Jesus Christ and to receive a remission of their sins through His Atoning sacrifice, which is symbolized by the ordinance of baptism.”

He added that connecting the ordinance of baptism to its “Christ-centered antecedent” will result in deeper understanding of its significance and in increased desire to invite others to receive the blessings of taking the Savior’s name upon them.

Choosing words intentionally can be part of keeping sacred covenants. As Church members strive to place Jesus at the center of their gospel vocabulary, they manifest their commitment to always remember Him. 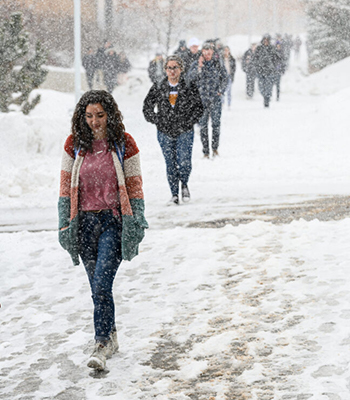 Students walk to a devotional at the BYU–Idaho Center in Rexburg, Idaho, on January 28, 2020. Photo by Lawson Turcotte. 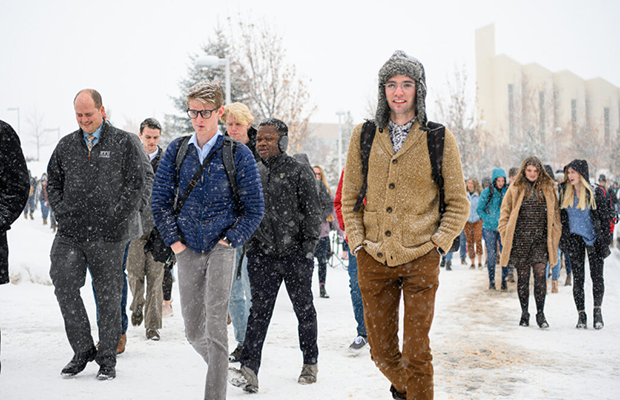 Students make their way to a devotional at the BYU–Idaho Center in Rexburg, Idaho, on January 28, 2020. Photo by Lawson Turcotte. 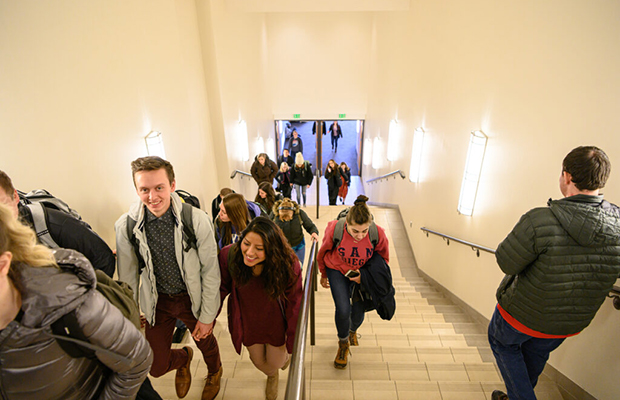