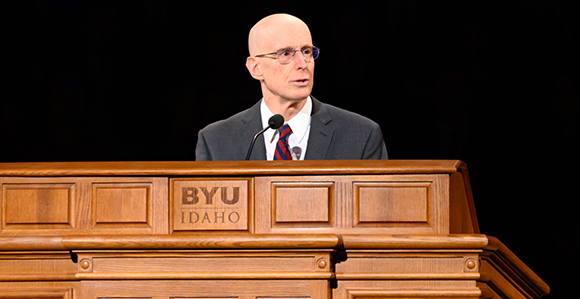 President Henry J. Eyring speaks to students during the first devotional of the winter semester in Rexburg, Idaho, on January 14, 2020.

Addressing the student body at the first weekly devotional of the 2020 winter semester, BYU–Idaho president Henry J. Eyring offered an antidote to doubts that may beset Church members.

“It is dangerous to doubt the truthfulness of the Church based on human behavior,” he cautioned during the Tuesday, January 14, event held on campus in Rexburg, Idaho. “Nor is there intellectual satisfaction or spiritual safety in challenging doctrines or policies that seem outdated.” Rather than resorting to “blind faith,” President Eyring suggested, a better response to doubt is “big faith.”

To explain this term, he said that although the gospel of Jesus Christ is perfect, “it is not perfectly intuitive to those of us in mortality.” When faced with resulting concerns and doubts, Church members should look to “the biggest and boldest of the Church’s declarations”—including the doctrine of the Atonement of Jesus Christ, the divinely directed Restoration of the gospel through the Prophet Joseph Smith, and the power of priesthood ordinances, which enable daily repentance.

A testimony of these three “big, hard-to-comprehend truths” can and should be attained by every person, President Eyring said. Such a testimony confirms the validity of the Church and its leaders, doctrines, and policies.

The Gift of Healing

Citing the example of the prophet Enos in the Book of Mormon, President Eyring noted that the “miracle of forgiveness and spiritual healing” is available to all of God’s children who are prepared to repent by changing their hearts and actions.

However, he added, the Apostle James teaches that a prayer for forgiveness and healing must be selfless: “Ye ask, and receive not, because ye ask amiss, that ye may consume it upon your lusts” (James 4:3).

To illustrate this distinction, President Eyring shared an anecdote from his own life. As a young missionary in the Provo Missionary Training Center, he knelt in prayer to ask Heavenly Father for an experience of forgiveness similar to the one Enos had. He thought such a powerful experience would make his testimony more authoritative for those he would teach than simply sharing the positive feelings he had when praying and reading the scriptures.

President Eyring received no such response from Heavenly Father. Instead, he reflected on the moments throughout his life when he had felt the Holy Ghost and received the peace of forgiveness. He realized he already had a testimony and did not need an Enos-like experience in order to share it.

He later came to understand that relating a dramatic personal experience of forgiveness with those interested in the gospel “would have unintentionally made them feel that their more modest spiritual manifestations were inadequate.”

The Mission of Joseph Smith

President Eyring testified of the important role of the Prophet Joseph Smith, quoting John Taylor, who said he “has done more, save Jesus only, for the salvation of men in this world, than any other man that ever lived in it.”

Noting the challenging circumstances faced by the Prophet, President Eyring said that despite scrutiny, “there is much about his life that is not fully understood or known with certainty. Joseph freely admitted his imperfections. Yet Hyrum Smith, John Taylor, and Willard Richards, colleagues who knew him best and saw him when things were at their worst, in Carthage Jail, remained faithful to him throughout their lives.”

Similarly, President Eyring said, his own grandfather, research chemist Henry Eyring, remained faithful to the Prophet Joseph throughout his life. “He worked in a realm that requires the testing of hypotheses with mathematical rigor and experimental reproducibility, as well as peer review of findings.” Nevertheless, “Grandpa Eyring” recognized that he would not fully understand the realities of the universe and the ways God is involved in mortality until after this life.

Bearing his testimony of the Restoration of the gospel of Jesus Christ through the Prophet Joseph Smith, Henry Eyring said, “May we live and understand it in a big way and not worry about the small things that we do not understand very well, because they will become clearer as we go on. . . . The things we believe are only a part of the things that are yet to be revealed.” 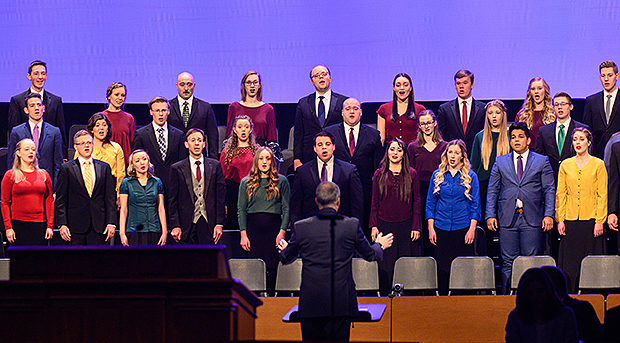 A choir of BYU–Idaho students sings at the first devotional of the winter semester held on campus in Rexburg, Idaho, on January 14, 2020. Photo by Lawson Turcotte, BYU–Idaho.

Henry Eyring also demonstrated the miracle of continuous repentance, President Eyring said, as exemplified in one of his grandfather’s final conversations with his son President Henry B. Eyring, President Henry J. Eyring’s father.

When President Henry B. Eyring asked his father if he might wish to pray for forgiveness as he lay in bed preparing for death, he replied, “Oh, no, Hal, I’ve been repenting as I went along.”

President Eyring encouraged students to practice daily repentance, which lifts burdens and brings peace, joy, and humility to those who sincerely seek forgiveness from the Lord.

He also acknowledged his own resistance to correction from parents, teachers, and Church leaders, saying he initially responds to reproofs with defensiveness. “It is tempting to rationalize my behavior by finding fault in the correction or even in the person giving it,” he added.

However, he draws on a metaphor shared by his father in the April 1997 general conference, comparing counsel received to a handful of sand. “If someone you trusted handed you what appeared to be nothing more than sand with the promise that it contained gold, you might wisely hold it in your hand awhile, shaking it gently,” President Henry B. Eyring taught. “Every time I have done that with counsel from a prophet, after a time the gold flakes have begun to appear” (“Finding Safety in Counsel,” Ensign, May 1997, 26).

President Eyring testified that “spiritual flakes of gold” from prophets, Church leaders, and family members can strengthen the “big faith” that “transcends the uncertainties and occasional doubts inherent to this mortal experience.”

His wife, Sister Kelly C. Eyring, similarly testified of the value of planting “seeds of faith” that become sources of support in difficult times. She plants tulips every autumn and sometimes forgets about them until they suddenly bloom after a long Rexburg winter, bringing unexpected joy and hope.

When planted, seeds of faith such as the experience of an answered prayer, the example of a scripture hero, or the relief of forgiveness through the Savior’s Atonement can yield joy and hope after a winter of trial, she taught.

Having already made the decision to believe in Jesus Christ, the Restoration of the gospel through Joseph Smith and daily repentance, President Eyring said, his faith is not shaken by attacks on the Church or uncertainties that may arise.

“In reality, human shortcomings and spiritual doubts aren’t the greatest threats to the Church and its members,” President Eyring added. “Pride is.”

The solution to pride and unsettling doubt lies in the humility that comes from “big faith”—in the Savior, in the Restoration, and in repentance made possible through priesthood ordinances. With knowledge of these grand, eternal doctrines, “the choice to believe can be made once and for all.” 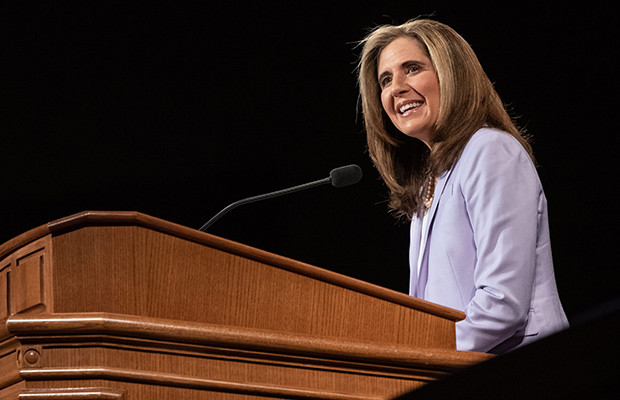 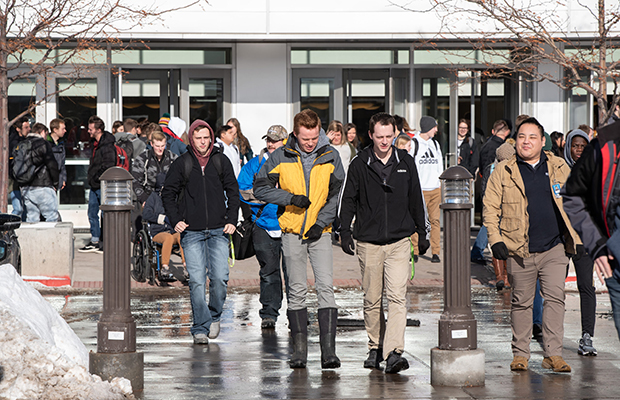 Attendees leave the first BYU–Idaho devotional of the winter semester in Rexburg, Idaho, on January 14, 2020.
Photo by Ericka Sanders, BYU–Idaho.