Are You a Joshua Tree or Tumbleweed? Sister Harkness Tells Students to Choose Now Whom to Serve

Legend has it that pioneers traveling through the Mojave Desert named the plant species yucca brevifolia the “Joshua tree” after the Old Testament prophet who raised his arms to guide his people toward the promised land.

These plants grow only in one desert region spanning parts of California, Nevada, Utah, and Arizona. Through sweltering summers and windy winters, they hold fast to the desert soil.

Sister Lisa L. Harkness, First Counselor in the Primary General Presidency, grew up in a forest of Joshua trees and wondered about their namesake.

“As an adult, I know that Joshua led the children of Israel into the promised land,” she told Brigham Young University–Idaho students at a campus devotional Tuesday, February 11. “He was a type of Christ, who leads all the faithful into the ultimate land of promise, the presence of Heavenly Father.”

At the end of his 110-year life, Sister Harkness said, Joshua gathered his people and told them, “Choose you this day whom ye will serve; . . . but as for me and my house, we will serve the Lord” (Joshua 24:15).

She then expounded on three messages contained in Joshua’s admonition.

Recently, Sister Harkness spoke with a college student who felt overwhelmed by the choices she had to make—which major to pursue, where to live, whom to date, and more.

“I just wish someone would choose for me,” the young woman told her.

As stressful as such decisions can be, they are vital to one’s personal progression. This exchange reminded Sister Harkness of God’s words to Joshua: “Be strong and of a good courage; be not afraid, neither be thou dismayed: for the Lord thy God is with thee whithersoever thou goest” (Joshua 1:9).

“Our whole mortal experience is centered around our agency. It is the engine that facilitates our eternal progression,” she affirmed.

She added that the Holy Ghost will help with making choices “as you intentionally put yourself in places where you can receive inspiration—places of revelation and learning, such as kneeling in prayer, studying the scriptures, serving in the temple, and participating in institute.” 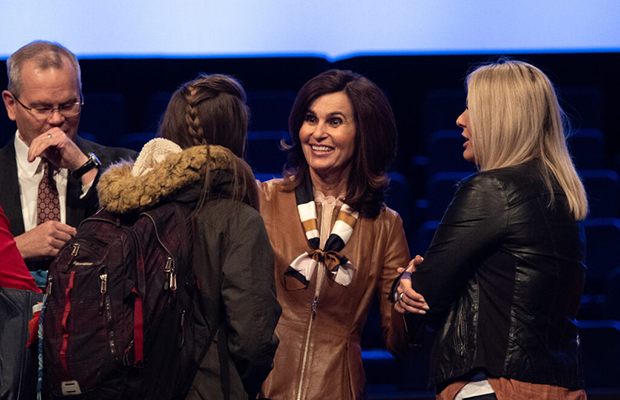 Joshua exhorted his people to choose this day—not someday—whom they would serve, Sister Harkness said.

Procrastinating some decisions, such as doing homework or paying rent, can have serious consequences. “Many of the choices we make cannot be tabled for some future day when we have time to get around to them. Some must be addressed daily, with intentional diligence,” she continued.

Repentance is one of those daily decisions, Sister Harkness taught. Regularly repenting is an expression of faith and a privilege that draws individuals closer to Jesus Christ. 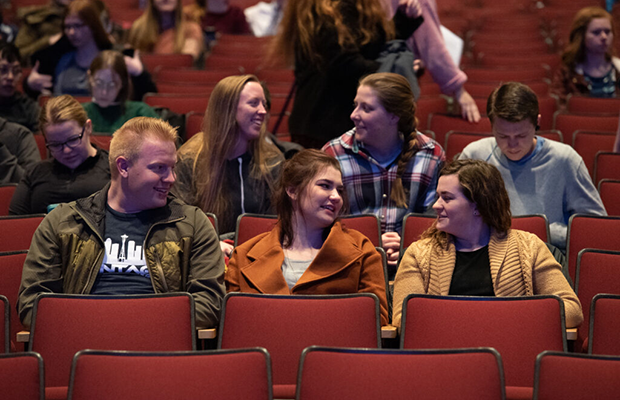 Through the atoning blood of Jesus Christ, Sister Harkness said, anyone who has chosen to leave the covenant path may return.

She quoted President Russell M. Nelson, who said, “Please do not stay off the covenant path one more minute. Please come back through true repentance, now,” and added, “Now means this day—not someday.”

For those who feel they have been “off-roading” too long, fearing that others will view their repentance as insincere because of their past, Sister Harkness offered this counsel: “Please be assured that as a result of your sincere repentance, the Savior will take care of your past—or, in the words of our day, ‘He has your back.’

“Have the courage to look toward Him and receive His healing, transformative power. You can trust the Redeemer of the world. As the Lord said to Joshua, ‘I will be with thee: I will not fail thee, nor forsake thee’ (Joshua 1:5).” 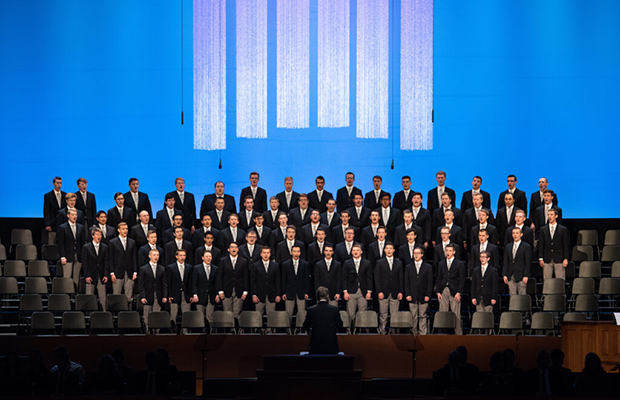 A student choir sings at a BYU–Idaho campus devotional on Tuesday, February 11, 2020, in Rexburg, Idaho. Photo by Brooke Larsen, BYU–Idaho.

Choose Whom Ye Will Serve

Disciples of Jesus Christ accept the responsibility to serve and comfort others as He would, Sister Harkness said. Choosing to serve others, whether as part of a formal assignment or in unseen ways, is service to God.

“Please pay close attention to the people around you,” she added. “You are not where you are by accident.”

Service to others includes those on the other side of the veil, she said, quoting President Nelson: “Every child of our Heavenly Father deserves the opportunity to choose to follow Jesus Christ, to accept and receive His gospel with all of its blessings. . . . My dear extraordinary [young people], you were sent to earth at this precise time, the most crucial time in the history of the world, to help gather Israel.”

Noting that “many of us spend 20 minutes of our day catching up on social media, game scores, or news headlines,” Sister Harkness invited audience members to spend 20 minutes a day on temple and family history work. 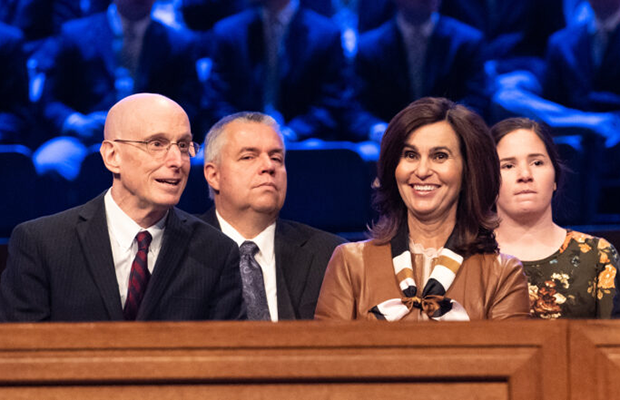 Showing a photo of the Joshua tree forest where she grew up, Sister Harkness pointed out tumbleweeds growing close to the ground.

When these plants dry up, the wind breaks them from their roots and blows them away, she explained.

All tumbleweeds travel in the same direction—whichever way the wind blows—and often end up in large piles. Sister Harkness shared a video of hundreds of tumbleweeds rolling away during a windstorm and said this phenomenon illustrates Paul’s warning about being “tossed to and fro, and carried about [by] every wind of doctrine, by the sleight of men, and cunning craftiness, whereby they lie in wait to deceive” (Ephesians 4:14).

The destructive practice of murmuring can result in being tossed around like a tumbleweed, she said.

When the Israelites approached the land of Canaan, which had been promised to them by the Lord, Joshua was one of 12 spies sent ahead to survey the area. Ten of the spies—all but Joshua and Caleb—complained that the Israelites had no chance of defeating the Canaanites. Their murmuring sparked widespread complaints, with many Israelites saying they would rather still be enslaved in Egypt and calling for a new leader to replace Moses.

“For their murmuring, the Lord relieved the children of Israel of the promised blessing that He would destroy the Canaanites and give them their promised land,” Sister Harkness said. “Instead, He sent them into the wilderness to wander for 40 years.”

This story demonstrates the contagious and fickle nature of murmuring, she said. Murmuring follows the “winds of popular opinion and trending concerns,” blowing people into a heap like tumbleweeds.

“If we are not careful, we too can get caught up in a murmuring breeze—and thereby surrender the agency to choose our direction on the covenant path,” Sister Harkness warned. “Please resist the temptation to complain away unanswered questions, temporary frustrations, or discouraging events. Do the spiritual work necessary to always be guided by revelation and continue to grow.”

Although Joshua trees and tumbleweeds grow together in the same environment, she added, one stands strong while the other blows away.

Doctrine and Covenants 45:32 reads, “My disciples shall stand in holy places, and shall not be moved.”

“Choose you this day whom ye will serve, committing to yourself that as for me and my house, we will serve the Lord.” 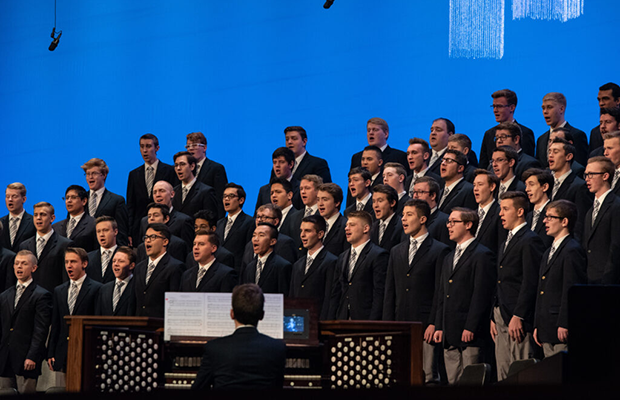 A student choir sings at a BYU–Idaho campus devotional on Tuesday, February 11, 2020, in Rexburg, Idaho. Photo by Ericka Sanders. 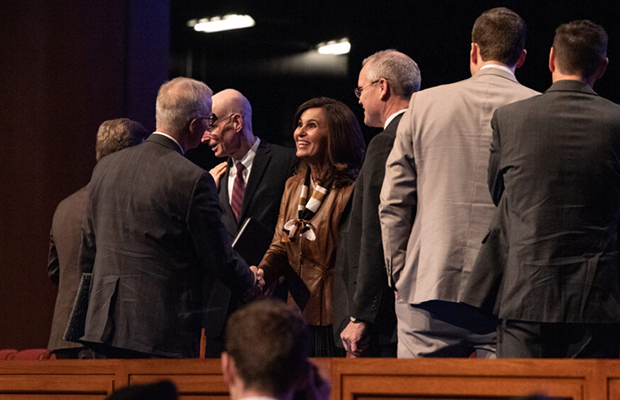