Elder Terence M. Vinson of the Presidency of the Seventy speaks during a Brigham Young University campus devotional in the Marriott Center in Provo, Utah, on February 11, 2020. Photo by Alyssa Lyman.

A famous Australian poem tells the story of a stockman—or cowboy—who, with his horse, gathers with a number of drovers—or stockmen who herd cattle—to help round up a prized and unique colt, who has joined some wild bush horses.

The other riders are skeptical of the stockman and his horse, who both come from the Snowy River region near Mount Kosciuszko, Australia’s highest mountain. They reluctantly allow him to ride with them. Soon the drovers catch up to the herd, but all the other riders pull up as they are faced with wombat holes—which are bigger than rabbit holes—and loose rocks and “stringybarks,” or eucalyptus trees, which make the ground perilous for riding.

“But herein lies the difference between the man from Snowy River and the others,” Elder Terence M. Vinson explained during his BYU campus devotional address on Tuesday, February 11. “He had absolute faith in his horse. Because they’d worked together for a long time, he knew him perfectly. And his horse was used to this type of terrain and had galloped down mountains like this before.”

The Australian-born member of the Presidency of the Seventy quoted extensively from the poem by Australian bush poet Banjo Paterson—which served as the inspiration for the 1982 film The Man from Snowy River—during his address to BYU students and faculty in the Marriott Center on the Provo, Utah, campus.

He sent the flint stones flying, but the pony kept his feet,
He cleared the fallen timber in his stride,
And the man from Snowy River never shifted in his seat—
It was grand to see that mountain horseman ride.
Through the stringybarks and saplings, on the rough and broken ground,
Down the hillside at a racing pace he went;
And he never drew the bridle till he landed safe and sound,
At the bottom of that terrible descent.

The relationship of the stockman and his horse should reflect the relationship individuals have with God as they face hardships and challenges, Elder Vinson said. “We can sometimes feel like we are careening out of control down a mountainside, beset with hidden obstacles. But God has been there and done this before. So why not put our trust in Him—He who knows exactly how to handle it?”

“Do we let God ‘have His head’ in our lives so that we can arrive safely at our destination? Or do we question His counsel or His commandments and lack full confidence and faith in His ability to lead us?” Elder Vinson asked.

Elder Vinson recalled a time in his life when he felt like he was rushing down a mountainside but was being led and directed by the Lord. At 26 years old and after only three years of membership in the Church, he was called as a bishop of a large ward.

“I was confronted with challenges that I was unable to overcome—with ward members having marriage problems and other issues,” Elder Vinson said. “I was a novice at marriage, and all I could do was let the Spirit carry me through the counseling that He gave on my behalf.”

There have been many times when the Lord simply needed him to not “shift in my seat,” Elder Vinson said, quoting the poem.

In likening the story of the man from Snowy River to his audience, Elder Vinson said, “We are the riders, and God carries us. If we are one with Him, He will carry us to our goal.”

In order to be one with God, however, individuals need to understand His most important teachings and commandments, Elder Vinson said.

Some interpret a desire to love others with a need to embrace their life choices. “There are many today who believe that to love someone means that we cannot disagree with their life choices. This belief is false! . . . Our first responsibility is to God and to His teachings of absolute truth and to His commandments.”

The man from Snowy River was submissive when at first he was denied the chance to ride with the others. He simply and humbly applied the strength that he received from his unfailing and proven trust in his mountain horse.

“This quality of meekness is not well understood and, consequently, not embraced. It almost seems to be counterintuitive, because it brings together the apparently conflicting qualities of humility, integrity, and strength,” Elder Vinson said.

While he and his wife, Sister Kay Vinson, were serving in Ghana, they grew to admire the Adinkra symbol of the “ram’s horns.”

“The ram will fight fiercely against an adversary, but his strength is derived by his bowing his head in a sign of humility,” Elder Vinson explained. “In that submissive stance, he assumes his greatest strength. As his head is lowered, he gains power to battle with, and defeat, opponents. Have you felt increased power and strength after bowing your head in heartfelt prayer and expressing your submission to your Heavenly Father?” he asked.

Individuals must make submission to the Lord their objective and thereby increase in strength and power. “We do this by growing closer to Him and multiplying the experiences we have with Him. This requires our acting with commitment and not being acted upon.”

As the world grows further from God and His truths, individuals must determine the strength and focus they are prepared to devote to loving God and standing for truth. “Will you ‘shift in your seat’ and succumb to popular opinion, or will you stand firm and confident in the counsels and blessings of your loving God and let Him ‘have His head’?”

Elder Vinson told his devotional audience members they can trust God absolutely. “We can get to know Him even better as He works with us in the many and varied experiences of our lives, just as the man from Snowy River knew his horse through experience upon experience. I have come to know God through my many experiences with the Holy Ghost over the years. It has reached the stage where I now expect that the Holy Ghost will guide and sustain me in each assignment I receive, without exception, because He has always done so.”

He then posed the question “Will you stay as one with God, as the man from Snowy River did with his horse, by placing your full trust and faith in Him, or will you, instead, hold back by lacking the courage and the commitment, the meekness, to reap the rewards of faithful lives?” 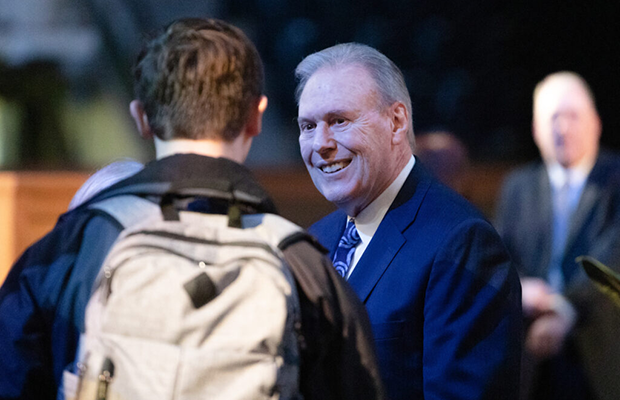 Elder Terence M. Vinson of the Presidency of the Seventy speaks with students prior to speaking at a Brigham Young University campus devotional in the Marriott Center in Provo, Utah, on February 11, 2020. Photo by Alyssa Lyman. 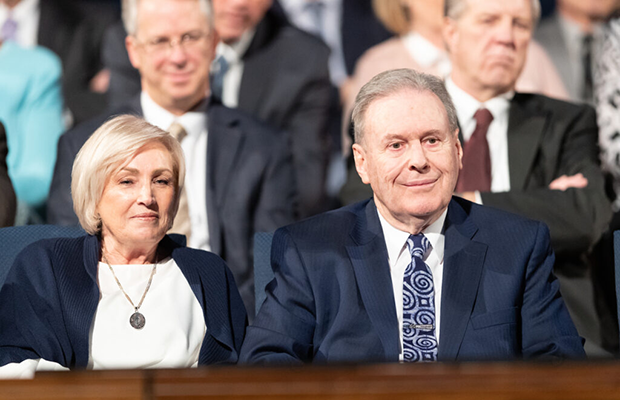 Elder Terence M. Vinson of the Presidency of the Seventy sits on the stand with his wife, Sister Kay Vinson, prior to speaking at a BYU campus devotional in the Marriott Center in Provo, Utah, on February 11, 2020. Photo by Alyssa Lyman. 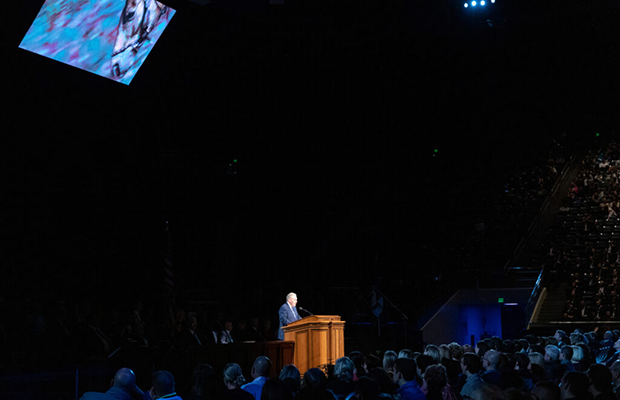 Elder Terence M. Vinson of the Presidency of the Seventy speaks during a Brigham Young University campus devotional in the Marriott Center in Provo, Utah, on February 11, 2020. Photo by Alyssa Lyman.