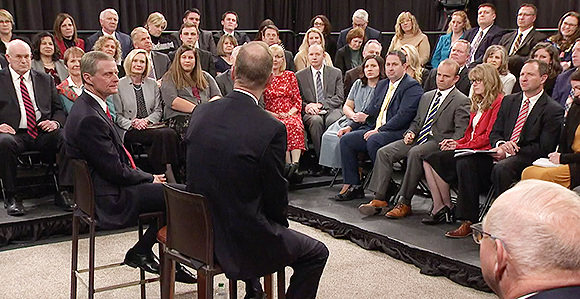 “We are not the teachers; the Holy Ghost is. So inviting others to act—to exercise their faith—helps to entice the Holy Ghost to teach them individually and everybody collectively.” —Elder David A. Bednar

As a high school football coach and a father with three kids in high school, Troy McDougal often sees teenagers in what he describes as their “natural environment.” In seminary, sometimes their demeanor is different.

“They often put on a face when they attend seminary,” said McDougal, a seminary instructor in Riverton, Utah. “They are struggling with some very real problems and are desperately seeking answers.”

While listening to Elder David A. Bednar’s message to Church Educational System employees and their spouses during a worldwide broadcast on February 7, McDougal received inspiration from the Spirit to help his students.

“I need to focus on using the Book of Mormon as a vehicle to guide them to a personal discovery of how they can receive revelation for themselves,” he said. “They are getting more revelation than they realize. They just need some guidance on how to tune into it.”

That guidance, he said, is helping students recognize the role of the Spirit in bringing thoughts to their mind and prompting them to act in faith.

“One of the greatest sources of insight you will have are the questions your students will ask,” Elder Bednar told CES instructors. “They really ask what they are troubled by and what they need help with. How do we know what to say or teach until we know where they are?”

During the Church Educational System’s annual Evening with a General Authority, Elder Bednar of the Quorum of the Twelve Apostles used a question-and-answer format to demonstrate how to recognize and act on personal revelation and help students do the same.

“We are not the teachers; the Holy Ghost is,” Elder Bednar said. “So inviting others to act—to exercise their faith—helps to entice the Holy Ghost to teach them individually and everybody collectively.”

Nancy Lowther, a seminary instructor in the Hilton Head South Carolina Stake, said Elder Bednar’s counsel came at the right time for her. “The students are tired, the weather is cold, and the teachers need a boost to know how to encourage the students to continue in their efforts to attend and actively participate in seminary class,” she said.

Remembering to focus on the role of the Spirit in teaching and learning was the boost she was looking for. “As we become involved in our students’ lives, pray for them by name, learn where they are in their gospel journey, and help them feel that seminary is a safe place for them to ask questions, they can have the experiences they need.”

“The Spirit will act to guide and teach them,” Lowther continued. And with the Holy Ghost present, “our classes will be learner-centered and Spirit-taught.”

Bryce Brunson, a seminary instructor in Herriman, Utah, said “seek first to understand” is a principle Elder Bednar modeled in word and action during the broadcast. Elder Bednar showed how to bridge the gap between what the learner understood and the message he was trying to convey.

“I felt very impressed that as a teacher I need to become better at living this principle,” Brunson said. “If I can come to better understand my students, then I can be inspired by the Holy Ghost about what invitations I can give them that will allow the Holy Ghost to enter into their hearts and teach and testify of truth.

Put simply, “As a teacher, I need to listen more and talk less,” said Aaron Pond, a seminary instructor in South Jordan, Utah.

Listening to Elder Bednar’s words filled Clive Joliffe, a coordinator in England, with “a sense of empowerment and reassurance.” He learned restating principles helps clarify them. And in teaching, he should not progress until he knows his students understand.

Additionally, “our unspoken conviction of the truth of being ‘in’ the revelation will be felt by the students and will increase their confidence in the feelings of the Spirit guiding their lives,” he said. 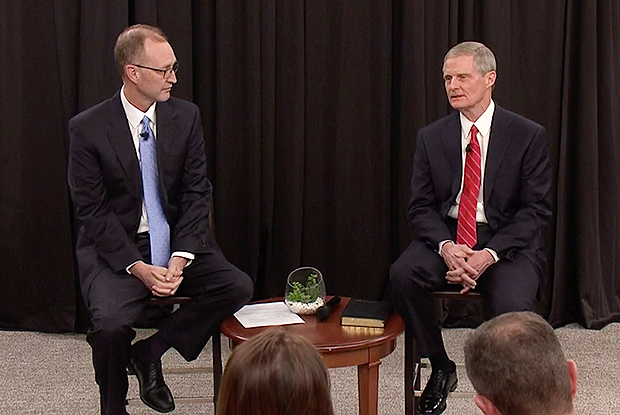 Elder David A. Bednar, right, speaks during the Church Educational System’s annual Evening with a General Authority on February 7, 2020. Chad Webb, administrator of Seminaries and Institutes of Religion, is seated on the left.

“Live in the Revelation”

Inspiration from the Holy Ghost is rarely dramatic, big, and sudden, Elder Bednar explained. In fact, most people will not recognize they are receiving revelation in the moment they are receiving it. For example, Nephi did not know in every instance that he was being guided by the Spirit.

When asked how we can live our lives in such a way that we are always ready for revelation, Elder Bednar said, “We should always be living ready for revelation—that we ‘may always have his Spirit to be with [us]’ (Moroni 4:3). There may be some who take this to the extreme; please use common sense.”

Many times during her service in the Church and in her personal life, Andrea Carrera from Guadalajara, Spain, said she has felt a “constant flow of revelation, subtle and still promptings that have helped me as an institute teacher as well as a mother.”

As she listened to Elder Bednar, she realized those moments of revelation have not come in isolated moments—they come daily, because she is living righteously.

She heard the voice of the Spirit speak to her that the youth need to understand this principle, and “as teachers, we only need to help them recognize this truth in their lives.”

Anita Longhurst, a seminary instructor in Riverton, Utah, said the phrase “live in the revelation” has been on her mind since the broadcast with Elder Bednar.

“If I want revelation about how to better minister to my ministering sisters, I need to be where they are, in their homes, at their activities, etc., so the Lord can speak to me according to their needs.” 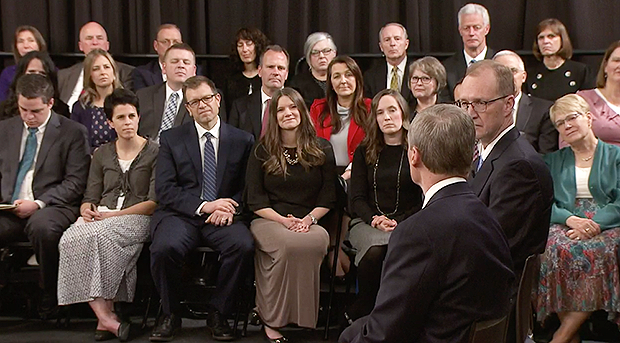 “It’s easy to get lost in the chaos of cleaning up two dozen raw eggs on the hardwood floor, five pounds of shredded cheese in the toy room, a bottle of syrup all over the carpet (because he wanted to roll around in it), or catching them climbing out the front window after popping the screen off,” she said.

“Tonight I realized that I don’t have to have the same quiet environment I had before kids to have ongoing revelation. As long as I am doing the best I can and trying to raise righteous children who love God and have a testimony of the Savior, then the revelation will continue to come, even if I don’t recognize it as revelation at the time.”

“We have an objective—we know generally where we are headed, but we don’t know all the obstacles or every detail of the route to get there,” he said. “We will, and do, face challenges. By following the Lord’s guidance, we can overcome and learn from these challenges.”

Watch the broadcast with Elder Bednar and Elder Johnson on broadcasts.ChurchofJesusChrist.org. 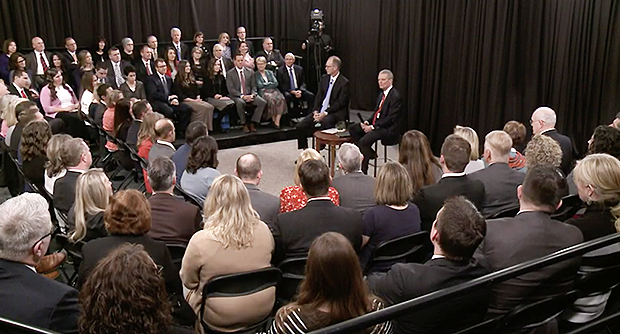